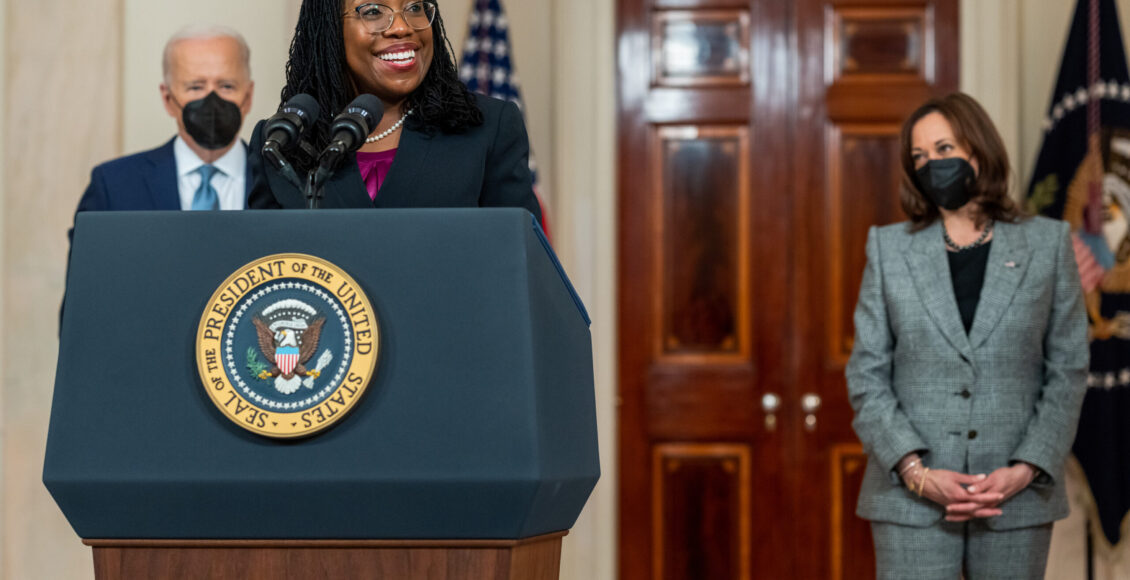 Making good on his 2020 presidential campaign promise to nominate a Black woman to the Supreme Court of the United States (SCOTUS), Joe Biden nominated Judge Ketanji Brown Jackson as Associate Justice on February 25, 2022. Solidifying this nomination on April 7, 2022, the US Supreme Court made history by confirming Judge Jackson’s nomination in a vote of 53 to 47. Judge Jackson is the first Black woman to serve on the nation’s highest court in its 233 year history. Of the 115 justices to serve on the Supreme Court since its establishment in 1789, 108 have been White men, and only two African American justices have served the Court, both of whom were men. These demographics are nowhere near representative of the broader US population. The African American population is the third-largest racial group in the US, making up approximately 13.4 per cent  of its total population. These demographics reveal the historical lack of racial representation on the Supreme Court, as Judge Jackson is the first Black woman to sit on the Supreme Court. Judge Jackson’s confirmation will not only contribute to the Court’s rulings but to Black representation in high positions of power that White individuals have historically occupied.

The Supreme Court rules on a diverse array of momentous cases. Its rulings greatly affect the nation’s population. The Court has answered critical questions like whether or not schools should be racially segregated (Brown v. Board) or whether women should be allowed to get abortions (Roe v. Wade). Often, the Court is asked to rule on a case that directly impacts certain groups (race, gender, and sexuality). For this reason, it is critical that the Court is composed of judges who are a part of such identity groups in order to ensure holistic and informed rulings. For example, race remains a highly predictive factor in determining a person’s economic and social experiences. As such, non-Black judges cannot make a fully informed decision on a case that pertains directly to Black people and their lived experiences. Articulating the value of representation, Sonia Sotomayor, an Associate Justice of the Supreme Court, states, “a different perspective can permit you to more fully understand the arguments that are before you and help you articulate your position in a way that everyone will understand.” Judge Jackson’s confirmation as a Black woman in America is a step towards fulfilling this need for representation. Celebrating on the steps of the Supreme Court, Abiola Agoro highlighted the importance of the historical moment, “this nomination means finally being able to not be limited by something as simple as not having representation.”

It is well established that racial minorities, particularly Black individuals, are often assumed to be underqualified in today’s society. At the same time, their White counterparts have the luxury of presumed intelligence. Vocalizing this struggle, Abigail Hall of Harvard Law School describes how she, as a Black woman, has had to consistently exceed expectations to “prove” her intelligence to others. Weeks after her nomination, this phenomenon became increasingly apparent in the questionable concerns surroundings Biden’s nomination of a Black woman. Georgetown lecturer Ilya Shapiro tweeted, “Objectively best pick for Biden is Sri Srinivasan, who is solid prog & v smart [sic], even has identity politics benefit of being first Asian (Indian) American. But alas doesn’t fit into latest intersectionality hierarchy so we’ll get lesser black woman. Thank heaven for small favors?” Shapiro’s comments reveal a deeper and widespread belief that Black individuals are ‘lesser” than other races and that any of their accomplishments are a result of “favors” to fulfill the “latest trend” of fulfilling quotas. This racist line of questioning followed Jackson into her confirmation hearings where she was asked if she had a “hidden agenda” to incorporate critical race theory into the legal system. Through the veiled racially-charged questioning from the media and fellow colleagues, Judge Jackson demonstrated an elite level of composure and patience.

Contrary to Shapiro’s beliefs, Judge Jackson is more than qualified to fulfill her role on the Supreme Court. Graduating magna cum laude from Harvard University and Harvard Law School, Judge Jackson was nominated and confirmed to the District Court of Columbia in 2012/2013. Jackson also served as the Vice Chair of the US Sentencing Commission in 2009, where she focused on reducing unwarranted sentencing disparities and ensuring that federal sentences were just and proportionate.  Moreover, Jackson worked as a federal public defender, giving her a unique perspective to bring to the bench. Public defenders are often the only actors in a criminal legal system who work with and on behalf of those targeted by it. Adding to her credentials, Jackson served as Justice Breyer’s law clerk, through which role she garnered a first-hand understanding of the Supreme Court Justice. Judge Jackson, by all accounts, possesses the qualities essential to a Supreme Court Justice: “a devotion to the rule of law; a commitment to judicial independence; an ability and willingness to collaborate with colleagues whose views and philosophies differ from her own.”

Beyond Judge Jackson’s future contributions as a Supreme Court Justice, her accomplishment will serve as an inspiration to Black girls and women across the country. Gathering quotes, the 19th, an independent, nonprofit newsroom, spoke to those gathered on the steps of the Supreme Court about Judge Jackson’s historical confirmation. LaDon Love articulates how much this moment means to her by saying, “When people see this woman on the seat, think about the young Black girls, think about the young girls of color who are going to say, ‘I can do that too.” Almost every other interviewee mentioned the inspiration Judge Jackson’s ascension provides to Black girls and women in America. Various studies have revealed that children’s career aspirations are highly influenced by who they see represented in their daily lives and media. First and foremost, Judge Jackson will go down in history as the first Black woman to sit on the Supreme Court bench. But, Jackson also has and will continue to serve as vital racial representation to Black women and other women of colour across the US.

The recent overturn of the landmark ruling Roe V. Wade by the U.S. Supreme Court ended a half-century guarantee of federal constitutional protection of abortion rights in the United States. Trigger laws in Arkansas, Missouri, South Dakota, and Wisconsin immediately went into effect following the ruling, criminalizing abortion in these states. Numerous states are predicted to follow. The overturn restricts women’s bodily autonomy across many states in the United States. In 2019 alone, more than 600,000 legal abortions were reported to the Centers for Disease Control and Prevention. The full impact of the ruling will not be fully realized straight away. The effects of the criminalization of abortion are intersectional. Impacting the most vulnerable and privileged first, many advocates and scholars assert that the overturn’s impact will be drastically disproportional. “Today the Supreme Court of the U.S. opens the floodgates for criminalization of Black women,” writes Gina Clayton-Johnson, founder of the Essie Justice Group, an organization that fights mass incarceration, in a statement to The Appeal. This recent decision by the Supreme Court only further highlights the power and, therefore, the importance of Supreme Court Judges. The overturning of Roe V. Wade was made along party lines. The assenting Supreme Court Judges were appointed by former Republican Presidents Donald Trump and George Bush, while those dissenting were appointed by former Democratic Presidents Bill Clinton and Barack Obama. Appointed by Democratic President Joe Biden, Judge Jackson’s addition to the Supreme Court is of clear value for future Court decisions.