The Incompatibility of Neoliberalism and Education: Chile’s Lesson 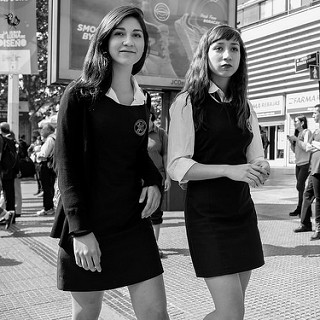 Chilean students take to the streets in 2006 in what is known as the Revolución de los pinguinos (Penguin Revolution).
Share

The recent election of Donald Trump has generated widespread concerns of a return to the kind of neoliberal policies that dominated Western economics  in the latter half of the 20th century. Neoliberalism policy relies on a deregulated and decentralized free market at the whims of supply and demand that, regarding education reform, would treat education as a commodity as opposed to a right. Trump’s proposed education reform centers on the idea of school choice, more commonly known as the voucher system, which allows parents to decide between publicly subsidized institutions, privately subsidized institutions, or non-subsidized private institutions. The government then provides the institution or family, depending on the layout of the system, with a predetermined subsidy to cover the cost of the student’s education. The voucher system not only eliminates the government-funded public education system, but it also decentralizes education and places control at a municipal level, creating difficulties with educational consistency and quality throughout the country.

Chile is a prime example of the breakdown of the public education system as a consequence of the voucher system. Chile adopted a voucher system in 1980 during a massive economic restructuring instituted by the International Monetary Fund that implemented neoliberal policies in a variety of areas, including education, in order to counteract the economic crisis of the 1970s that followed the failed socialist experiment. This massive economic restructuring drastically altered the composition of Chile’s educational institutions, as private enrolment increased from 15% to 33% between 1980 and 1996. Today, 47% of students attend private institutions in Chile. The voucher system eliminates government-funded public schools and provides this funding at the student level, forcing schools to compete with each other in order to gain the funding that accompanies each student. Under this system, students are treated as economic commodities that are grouped together, as opposed to individuals with personalized needs. Privately subsidized schools in particular are notorious for admitting students who are the cheapest to educate, and fail to meet the individual needs of students. While some studies argue that competition forces public schools to improve and become more competitive in order to receive funds, these studies ignore the fact that the voucher system, at least in Chile, does not sufficiently cover the costs of private, or even public, education in most cases, making privately subsidized schools inaccessible for most lower income families. The student composition of Chile’s private institutions consists primarily of middle and upper class families,with 90% of its students emerging from Chile’s top 60%. While this statistic emerges partly from the increased costs of attending a private institution, these institutions also participate in more selective admissions processes that seek out academically gifted students who tend to come from higher income families, and in many cases, consideration of socio-economic factors is a primary concern in the admissions process, even if it is not technically permissible. Not only does this further increase the economic disparity in Chile, but it also exacerbates the economic and academic disparity between public and private institutions, as budget cuts to public education have led to rapidly decreasing educational quality within these institutions.

Many studies in favor of the voucher system argue that students attending privately subsidized institutions perform better than their counterparts—although improvements are in fact very minimal—but there are a variety of factors that play into this statistic. First off, private institutions receive both municipal and privatized funding while public institutions only receive municipal funding through vouchers. This difference in funding creates a large resource disparity that is most blatantly evident in regards to teacher quality, as private institutions can afford to pay their teachers more than public institutions. Privately subsidized institutions are also subject to limited class sizes that public institutions are not allowed to implement. Finally, private institutions also tend to have more students from higher socio-economic backgrounds, which often correlates to parents who are more involved in and concerned with educational achievement. Such advantages are compounded by the fact that public education is not free in Chile. While it is subsidized, families still face costs that many of those in the United States, as well as other countries with free public education, take for granted, which has led to massive national protests over the last eleven years, beginning in 2006 with the Revolución de los pinguinos (Penguin Revolution,named for the black and white school uniforms of Chilean students). These protests have consisted of primary, secondary, and university students, parents, teachers, and concerned citizens in favor of free public education, increased federal regulations to end profiteering within the educational system, the development of consistent national standards to ensure quality throughout the country, and finally, more affordable higher education.

The fundamental problem with the voucher system is that it does not solve the economic and educational disparity it aims to undercut, which is why it has been continuously tabled over the last 30 years in the United States ever since the Reagan administration first proposed the system during its second term. Regardless of one’s personal preferences regarding the federal government, the Chilean experiment has made it clear that the federal government must play an active role in education to establish national standards and regulations that protect students and hold institutions accountable. Without national guidelines, schools are provided with too much freedom that hampers student development as a whole, which ultimately creates a variety of other social and economic issues.

Trump’s educational policies aim to provide America’s “11 million school aged children living in poverty” with access to quality education through the implementation of the voucher system, which will appropriate $20 billion dollars of federal funding to states through grants, specifically those states with private, charter, and magnet school laws. Trump further argues that states should invest an additional $110 billion into the voucher system to provide a total of $12,000 per student for primary and secondary education. Put into practice, this figure does not cover the costs to educate a child, especially within the private system, which Trump seeks to more heavily promote. Similarly to the current situation, lower class families would still be subject to a public education system that will be even more underfunded, increasing the educational achievement gap both domestically and globally. One of Trump’s primarily concerns is the disparity between American students and their global counterparts who are outperforming them, but as countries such as Finland and Singapore have proven, successful education reform focuses on educational practices. Through the implementation of coherent national standards and more student-oriented conditions within schools that include smaller class sizes, more qualified teachers, the development of both cognitive and non-cognitive skills, along with many other variables, their focuses have proven to be a more effective route. Trump’s proposal neglects all of these areas and is simply geared towards replacing the current underperforming system with a new, and potentially worse, underperforming system that is likely to inflame, as opposed to assuage, national educational concerns.