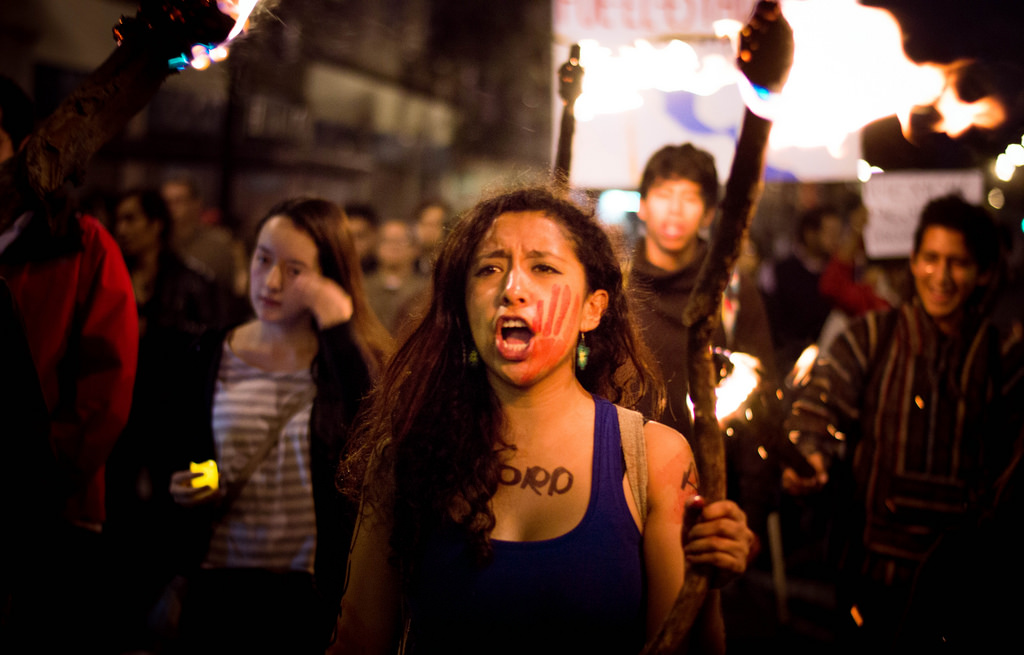 Over two months have passed since the disappearance and presumed murder of 43 students from a rural teachers college in Mexico. The students were passing through the Iguala, the capital of Guerrero state, en route to Mexico City to participate in a protest, when their buses were cornered by local police, indiscriminately shot at, rounded up, and handed over to cartel killers.

The Mayor of Iguala, as it turns out, had ordered the police to apprehend the students as to not interrupt a campaign event for upcoming elections, where his wife was giving an important speech. The Mayor and his wife had ties to a local Drug Cartel Guerreros Unidos (United Warriors). According to government investigators, the Cartel hit-men then took the protestors to a remote area outside a garbage dump, killed them, and burned their remains. They then bagged the remains and scattered them in a nearby river. The remains are yet to be positively identified.

The incident has launched nationwide protest. Demonstrations are taking place daily in Mexico City. Most have been peaceful, but a select few have led to the destruction of government property – such as the door of the National Palace and City Hall in Iguala. The government’s response has done little to the diffuse the protest, as officials fumble the handling of the case. Political pressure has already forced the governor of Guerrero, Angel Aguire, to resign. At a press conference on the case, Attorney General Jesus Karam stopped questions short, replying “Enough, I’m Tired.” The phrase quickly became a Twitter hash tag to voice frustration against the government. The Nieto Administration is scrambling to deal with the biggest crisis since the President’s election in 2012. The public face of the state is melting away, displaying a deeply rotten frame underneath.

Trying to deconstruct the circumstances of the disappearances, and the national reaction, is to unpack a set of deeply rooted, overlapping legacies of an authoritarian state, and a drug war that has left close to 100 000 dead and 26 000 disappeared. There have been nearly a dozen cases of mass graves discovered throughout Mexico since 2010 alone. The complexity of events taking place in Mexico defies a simple synopsis. The disappearance of the students is not a story that fits into a simple narrative about the depravity of Mexico’s drug cartels, though they do play a key role in its unfolding. Though it was cartel killers who carried out the actual disappearances, they acted on orders from the state. The police are also responsible for killing 6 unarmed students in the initial confrontation. The difficulty of the incident is summed up in a truism about the Mexican state that it “is really hard to tell where the state begins, and where the drug cartels end.” The Mayor’s wife reportedly funnelled money between the cartel and the municipal police.

What is clear is the colossal failure of the Mexican State that too often has relied on authoritarian tactics to maintain its grip on an unstable society. The government has long targeted student groups and rural schools like Ayotzinapa, which are a source of leftist political activism. The student’s school has alumni that include a key guerrilla leader from the 1970s “Dirty War”, Luis Cabañas. Just months before the disappearance, a violent clash erupted between municipal police and student protestors blocking a Federal highway, leaving several students dead.

The Drug War launched under former president Felipe Calderon exacerbated these authoritarian practices, creating a culture of impunity while doing little to uproot the cartels. Calderon launched an extensive crackdown that eliminated top leadership of the major cartels but ultimately simply splintered them, creating 60 to 80 new ones. Militarization of the conflict essentially gave the security apparatus free reign to use force as they saw fit. In the all out war against the cartels, all targets were deemed fair. Social activists like the missing students and journalists have borne the burnt of the war’s impunity. Mexico is one of the most dangerous countries in the world for journalists who are targeted not just by the cartels for their coverage, but also by corrupt officials. The vast majority of crimes go unreported and unprosecuted. Mexico currently has a dismal 3% conviction rate for homicides.

In order to protect themselves from the aim of the Federal government, the cartels have infiltrated essentially every level of government. According to the State Department, half of Mexico’s state governments are now under the control or influence of the cartels. Meanwhile, police forces face a choice between “comply or die” in the war, leading to an ineffective and unaccountable force beholden to the intimidation of the cartels. Even the military was complicit in the latest incident. Housed in barracks just 100 meters away from where the student’s buses were stopped, the military did not intervene to protect the students despite warnings from local human rights activists.

Past legacies are rapidly disintegrating in the current political atmosphere. National protests are overturning the traditional relationship between the state and civil society, forcing the hand of the current administration. The incident has left no politician, political party or official untainted. Demands for the resignation of President Nieto are growing as the president faces the lowest approval ratings since the 1990s. Mexican civil society is articulating a rejection of the entire political class with the slogan “Que Se Vayan Todos” (throw them all out). The President has promised comprehensive security reform, including a dismissal of the entire municipal police force. To protestors, the state’s overtures are nothing more than empty gestures. The parents of the students have refused to accept the results of the investigation carried out by government officials, forcing the government to invite an Argentine forensic team to conduct the investigation, and send the remains to Austria for further testing.

The political momentum generated by the disappearance of the 43 students is difficult to overstate. Part of what makes this moment so unique is that the victims in this case completely defy the logic of impunity. The case is not fading from the public view, as countless others have, because it is proving impossible to stigmatize the victims – unarmed and innocent students. The parents of the students have gained a public visibility similar to the Argentine Plaza de las Madres. Long-term dissatisfaction with the state has been catalyzed so strongly in a single event that has become symbolic for all of the frustration, the suffering, and the injustice that Mexican citizens have endured at the hands of the State and the cartels.