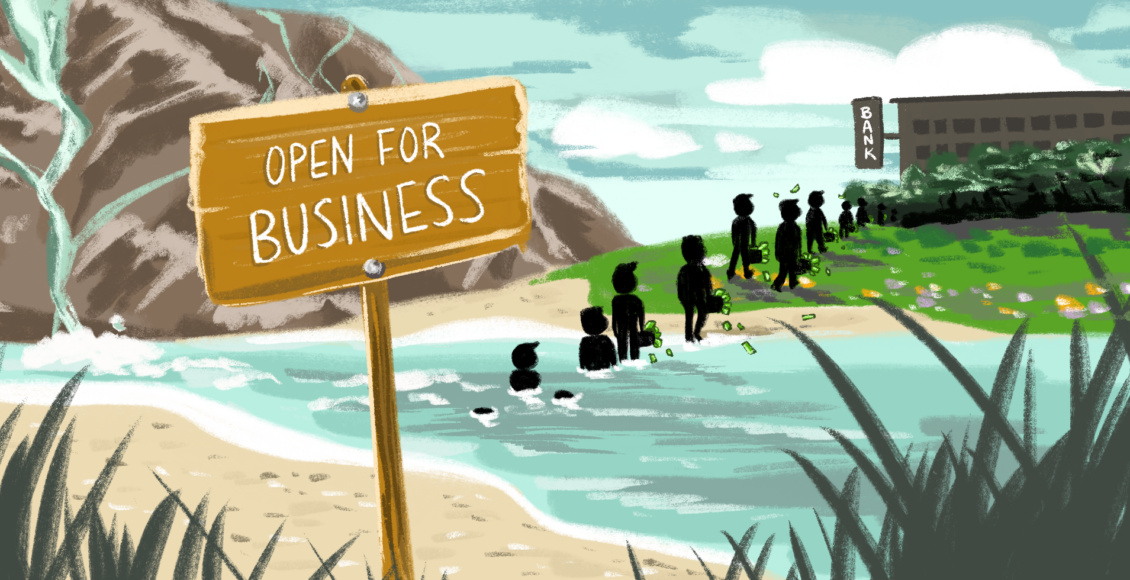 Income inequality has been increasing at an alarming rate across the world. Over the course of the COVID-19 pandemic, American billionaires have made an astonishing $565 billion US, while the unemployment rate has hovered in the double digits. Meanwhile, a newly published report predicts that a falling fertility rate globally will have “jaw-dropping” effects on our societies. Thus the stage is set: the rich are getting richer, the poor are getting poorer, and the working population upon which we depend to prop up our social nets is dwindling. The four horsemen are coming.

As wealth is being accumulated in a smaller percentage of the population, that might suggest the rich will have an even greater base from which to be taxed. Ideally yes, realistically no.

In 2014, an anonymous individual made contact with German journalist Bastian Obermayer with the message: “Hello. This is John Doe. Interested in data? I’m happy to share”. This cold-call message became the foundation of one of the biggest data leaks in history — the Panama Papers — and “one of the most explosive in the nature of its revelations”. John Doe’s motivation: income inequality.

The Panama Papers went on to prove in great detail the financial acrobatics wealthy individuals perform to hide their assets from local jurisdictions. Moreover, the document leak demonstrated how a Panamanian law firm enabled its clients to avoid taxes, international sanctions, and other regulations by establishing shell corporations that concealed their true ownership. A study of the 11.5 million leaked documents revealed that nearly $2 trillion passed through the law firm’s hands.

More recently, the 1Malaysia Development Berhad scandal (1MBD) saw $700 million be siphoned from the Malaysian sovereign wealth fund into the personal account of Malaysia’s former prime minister, while an additional $4.5 billion is suspected to have made its way into the bank account of an international fugitive. However, with only a fraction of the money having been recovered and the rest still missing, one is forced to question whether the international financial system encourages such activities as have been exposed by both the Panama Papers and the 1MBD scandal.

Haven is a Place on Earth

Tax havens in the modern and commercial sense emerged in the 1920s as various jurisdictions realized that, due to their poor access to land and labor, they would be unable to compete for investors against more favorably endowed locations. Consequently, to increase their competitive advantages, these locations sought to attract foreign investors by creating a more beneficial tax environment. Furthermore, the destruction brought about by World War I meant that European countries had begun increasing taxation levels to finance their reconstruction efforts. Wealthy investors were therefore actively searching for more favorable locations to store their assets.

Over the course of the 20th century, other states, cognizant of the benefits that would come, set about enacting laws that would afford them the status of tax haven. Since these early beginnings, the ability to attract foreign capital has enabled these otherwise poorly endowed territories to gain significant economic returns. For instance, in a ranking of countries by GDP per capita, six out of the ten highest-ranking countries are corporate-focused tax havens, while the remaining four are oil and gas exporting countries.

The Principality of Monaco, located on the French Riviera, embodies all of the characteristics of a tax haven: low tax rates, well-governed, lack of effective exchange of information, and lack of transparency. It has thus managed to attract high net worth individuals and corporations to its territory. Moreover, it makes the process as simple as possible, with non-residents being able to set up a fully functioning corporate entity in three weeks. Citizenship requirements in the principality are also tailored to the wealthy, as becoming a permanent resident requires a minimum of €1 million, of which €500,000 must be deposited and kept in a Monegasque bank account, while the remaining €500,000 must be put towards a property in Monaco.

However, not all individuals or corporations that employ tax havens are doing so for the purpose of hiding their assets beneath the opaqueness of a shell corporation. For instance, individuals with a global investment portfolio are exposed to a different tax system in every country they invest. Consequently, these individuals are effectively taxed twice whenever they make money from their investments: in their country of residence and in the country they have invested. Many countries have sought to eliminate such double taxation by signing tax treaties; however, the system is far from perfect and does not cover every country. Moreover, many individuals, not only those of particularly high net worth, have assets in tax havens, as most pension funds, such as the Canada Pension Plan Investment Board, attempt to avoid double taxation and seek more efficient fund administration industries by going through offshore entities.

The Web of Immorality

The existence of tax havens, as opposed to a well regulated international financial system with a robust network of tax treaties, suggest that those who seek to hide their assets will continue to do so. While the act of storing assets offshore can be perceived as immoral, a more interesting question is why it remains legal.

America is a valuable case study as it pertains to the legality of tax havens. Under the Obama administration, much attention was paid to the issue of offshoring, especially assets held by Americans in Swiss banks. However, as Swiss banks were being targeted, America emerged as “the biggest tax haven in the world”.

The surprising emergence of America as a tax haven and its unwillingness to target offshoring practices more broadly is a consequence of its political system. In 2016, the average winning Senate candidate spent $10.4 million on their campaign. During the same year, an estimated 73% of Fortune 500 companies were using subsidiaries in tax havens, while also being some of the biggest political donors. Given the role “big money” plays in political campaigns, politicians are wary of going after their donors’ pocketbooks or threatening the corporate structure of multinational companies, as they would then risk the donations that have become so characteristic of American elections.

More broadly, the impact of financial offshoring on the world economy is too great for policymakers to simply outlaw the practice. Property markets across the world depend on individuals who seek to launder profits. From Singapore to London to Vancouver, property prices have been artificially inflated due to money laundering. The implementation of policies aimed at impeding these transactions, such as targeting the use of offshore corporations, would inevitably deflate property prices and threaten national economies. Furthermore, numerous countries depend on the offshoring business. For instance, the City of London Corporation, covering less than a square-mile but housing the lion’s share of the United Kingdom’s financial sector, is the most important cog in the wheel of global offshoring, while contributing $64 billion to Britain’s GDP in 2016.

Dismantling the web of immorality that has been developed by those seeking to hide their assets is a herculean task. However, if we are to ever achieve a more equitable wealth distribution, policymakers will have to make a concerted effort to restructure the international financial system; otherwise, its lack of oversight, enabled by the use of tax havens, will continue to give us such scandals as the Panama Papers and 1MBD.