The New Democratic Party Convention: Perspective from the Floor 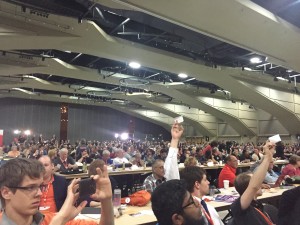 I spent this past week in Edmonton, at the party convention for the New Democratic Party of Canada. After the smoke subsided and the convention was adjourned, the NDP underwent a significant change. The act of deposing Thomas Mulcair as leader of the NDP was not simply a move that was made by 1800 unhappy, disgruntled New Democrats who were angry with the elections results. The reasons for booting Mulcair were much more profound than what a lot of the media are making it out to be. We weren’t being as one pundit said (I’m paraphrasing): “like Liberals who depose our leaders every time they lose an election.” Again, for myself at least, the vote was much more than that. It meant not only a new leader but also renewal; renewal for the party, renewal for the members, a renewal of the values that all of those on the convention floor hold so dear and we did so in a strong way, giving Mulcair only 48% approval; the lowest approval rating a leader has ever gotten from a convention had been before this 66.9% (Joe Clark, Progressive Conservative leader in 1983). I ,along with other party activists who signed that letter on March 15th, has for a long time been witnessing our party, to which we had dedicated so much of our time, veer in a direction the likes of which we had not intended.

I gratefully commend the efforts of people like NDP strategist, Brad Lavigne, Campaign National Director, Anne McGrath and former Press Secretary and current National Director of the NDP, Karl Belanger, for the work that they put in to professionalizing the party; without them the NDP would have never been able to even think of itself as one day being in contention for a chance at government. However, at times since 2011 or at least 2012, this professionalization came at the expense of the core grassroots values of the NDP and we witnessed the intense bureaucratization of our party. We also witnessed an incredibly disorganized NDP brass that was unfortunately unprepared for this historic shot at national governance. We witnessed too many great constituency campaigns go unnoticed as the central narrative overtook the many great and positive messages that were being conveyed on the ground. We did not only lose the election but we did so at the expense of our grassroots (like internal party democracy) and progressive values at times. As I remember one fellow delegate saying at the convention: “If I wanted to sell out my values for an election win, I’d join the Liberal party.”

But these profound reasons for renewing our party have constantly been skewed by an unrelenting media narrative, like the article written by Drew Brown  in Vice where “renewal” events were represented as small, insignificant and “dingy.” The NDP was represented as totally divided and fractionalized, ideologically insane. What Brown fails to realize is that the grassroots wing of the party is what makes the NDP, what breathes it life. And events in “dingy” dive bars (the bar was actually quite nice, I wouldn’t go as far to call it dingy) are what make this party great, what gives it spirit and hope. He left all that out. Another journalist who I have (until now) had immense respect for because of his thoughtful analyses on things like democracy in Canada and electoral reform, Conservative columnist Andrew Coyne was almost utterly completely dishonest while tweeting about the convention all weekend. At one point, he went so far as to intentionally misquote Stephen Lewis (former Ontario NDP leader and UN Ambassador) during his speech. He cut off Lewis’ full quote on Twitter on April 10th, making it seem like he said “Feminism is a vacant construct…” while the actual quote was: “Feminism is a vacant construct without a childcare program across Canada.” This type of gutter journalism was absolutely deplorable and offensive and I am still confused as to why Coyne would stoop this low. Back to Drew Brown, one thing he was right about however was Mulcair and his speech, having some very crude words for it. Instead of giving the speech of his life, he gave a stump speech, a campaign speech writhing on about Liberals and Conservatives rather than the need to reinvigorate the NDP grassroots elements.

This convention was Mulcair’s do-or-die moment, his one chance to save himself from the perceivably inevitable guillotine that swung over his head. And he could’ve done it too. If he had simply attempted to persuade the unions (most of them that were whipped to vote for him) and some of the pro-pipeline Albertans and party centrists present he probably would have had the number to at least be permitted to continue under the party’s constitution, but he failed to do so. He swayed to the left and told reporters

that he’d do anything to keep the oil in the ground. Mind you, I personally agree with this point: I am anti-pipeline and an unapologetic leftist (as you might be able to tell from my blogs) but I saw this as a strategically unusual move for a usually strategic career politician. By doing this, he angered even centrists as he was trying to appease those leftists at convention (support that he had already lost a long time ago). Regardless of all this though, when he did lose, he did so with class and still went to the House of Commons the next day and fought for the NDP and NDP values; Mulcair was ever honourable in defeat.

But mind you, the convention was not only about Mulcair, the membership matters too and on that point there were many good resolutions passed: one to lower the voting age to 16, one to support proportional representation, one to adopt the Universal Declaration of Indigenous Rights, and one to end the unfair practice of unpaid internships. Myself and others in addition were also trying to get a motion for the party to adopt a position on free post-secondary education on the floor, but unfortunately failed to do so. The convention floor was full of brilliant and talented members trying to put forward their equally brilliant ideas and this should not be overshadowed by the leadership changes.

Before I conclude, a word about the Leap Manifesto. Make no mistake this document can be perceived to be radical and to some extent it is – but it’s necessary. For those who don’t know, the Leap Manifesto was a document penned by Stephen Lewis’ son Avi Lewis and his wife, fellow activist Naomi Klein which basically characterizes a shift (or leap) to a full, 100% renewable-energy economy in twenty years and to 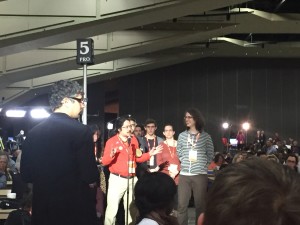 completely end use of fossil fuels by 2050. This is obviously controversial for NDP folk in Alberta where the first ever NDP government was elected on May 5th of last year after a decades-long Progressive Conservative rule. NDPers across the country don’t want to lose this as it was a momentous period in NDP history, one that most hope will continue, so it is understandable why the Leap Manifesto is so controversial even in NDP circles. There was a resolution passed on Sunday penned by Lewis alongside former MP Craig Scott and others like Libby Davies that mandates riding associations across the country discuss and debate the Manifesto.This was broad enough to appeal to most. However the media and Wildrose (Alberta’s opposition and ideologically conservative party) have twisted it to seem like the NDP outright adopted it the Leap Manifesto. Discussions about this needs to be had and in my opinion, this resolution sends an important message and says that the NDP is ready to at least discuss the radical changes that will eventually inevitably be necessary for our energy sector to stave off the impending climate crisis. It makes sense for a progressive party to take this relatively progressive chance: it is not crazy or non-pragmatic.

So, is the NDP now a divided party? I suppose, but so is any party after an event such as this. But this convention shows that New Democrats didn’t vote based on opportunism but on their values, they voted for renewal. If anything, this convention doesn’t show a lack of unity but rather a reaffirmation of NDP socialist values and an NDP that is truly ready for change. The future may seem murky but it will be bright.