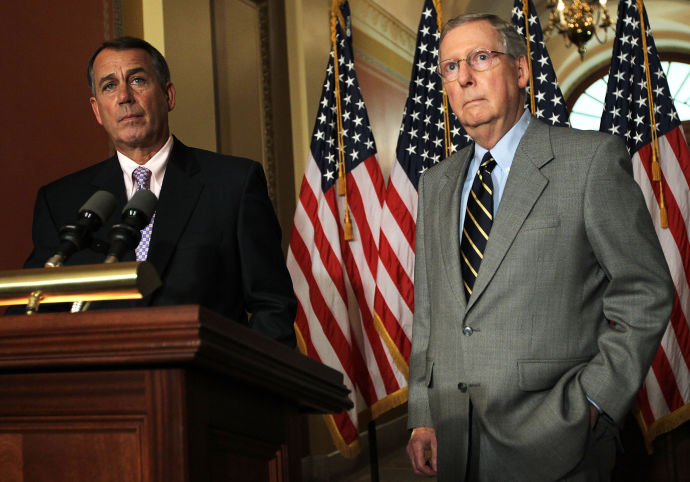 After watching mainstream media coverage of the recent U.S. midterm elections, anyone with even a cursory knowledge of politics was likely convinced of two things: (1) The Democratic Party is in turmoil and (2) Republicans capitalised on Americans’ overwhelming anti-Democratic sentiment to dominate not only the Senate races, but also almost every governor’s seat up for grabs. Both talking points, while not entirely false, are gross oversimplifications of a rather paradoxical period in U.S. history, simplifications that betray the more alarming issues of record-level distrust in government1 and an outdated two-party system that simply does not represent the interests of the American people.

Neither the Republicans nor the Democrats campaigned on substantial, consistent issues. New Senate Majority leader Mitch McConnell and his cronies can flaunt their victory all they want, but the reality is this election was not a vote of confidence for the GOP by any stretch of the imagination. National exit polls indicated nearly identical levels of frustration with both parties, as 59% and 60% of voters reported being dissatisfied or angry with the Obama administration and the Republican leaders in Congress, respectively.2 Accordingly, the Republican Party’s only effective weapon in this campaign was the all-encompassing claim that a vote for their candidates was a vote against the president, rather than for any specific promise of change. Only the most fervent partisans harbour any illusions about the new regime’s ability to rebuild public trust in the national government; indeed, even the victors themselves are expressing frightening levels of cynicism and apathy. The National Review, one of the United States’ most widely-read conservative publications, released an editorial the morning after the midterm elections in which they explicitly advised Republicans not to govern for the next two years.3 Trying to pass legislation, the editors argue, “makes them [Republicans] hostage to their opponents in the Democratic Party and the media. It empowers [soon-to-be Senate Minority leader] Harry Reid, whose dethroning was in large measure the point of the election.”

Now, while it is true President Obama maintains veto power over any legislation Congress passes, this is no way justifies such a ridiculous claim. The GOP has the opportunity to prove themselves to the American public, and even incremental progress would bolster their case for the presidency in 2016. Furthermore, “dethroning” Harry Reid and the Democrats was a distant second priority to voter disgust with Washington as a whole. Neither party can reasonably claim to have a mandate from voters, and this midterm result should not be viewed as a cause for celebration by anyone with a vested interest in the country’s affairs. Yet, the National Review laughably portrays Republicans as the victims in Washington without a care for the millions of current and would-be citizens who are actually suffering from this government’s inaction.

Not only does this argument exemplify a startling disconnect from American voters, but it actually condones the endemic political gridlock that strikes at the very core of representative democracy. The article goes on to say that, “Even if Republicans passed this foolish test, it would do little for them. If voters come to believe that a Republican Congress and a Democratic president are doing a fine job of governing together, why wouldn’t they vote to continue that arrangement in 2016?” In other words, conservatives should prefer complete control over government to real progress. One would certainly hope this appalling view does not represent the Republican Party as a whole, and at least publicly, both McConnell and President Obama expressed eagerness to work together.4

However, both leaders recognise the emptiness of such words, and based on the actions of Congressional Republicans throughout Obama’s presidency, 5 the National Review’s proposed plan essentially just continues the status quo. The GOP has effectively hijacked the legislative process, and there is little reason to think they will suddenly display a sense of urgency to accomplish anything just because they now control the Senate. This, of course, does not excuse the complacency of the Democratic Party, both in this election and in their entire political outlook. As the ruling party with everything to lose, Democrats—particularly incumbents in the Senate—bore the burden of presenting a detailed argument in this campaign; yet, they never came close to finding a unifying theme nor did they display appropriate urgency at any point. The party that, just six years ago, ran one of the most comprehensive presidential campaigns in U.S. history, simply rolled over and died. Obama himself called the contested Senate seats “the worst possible group of states for Democrats since Dwight Eisenhower,” a statement that, while arguably true, does not warrant surrender.6 Nonetheless, that is exactly what happened, as Democrats appeared frightened to even discuss the country’s positive economic growth,7 the unprecedented effectiveness of the Affordable Care Act in expanding access to health coverage,8 or immigration reform. Strategists kept Obama on the sidelines of the campaign, and many Democratic candidates even publicly distanced themselves from his policies in a futile attempt to appease local constituents. As one White House aide aptly put it, “We switched to a prevent defence—and we were already behind.”9

This lethargic approach is far from a new development, though. Since Obama’s historic win in 2008, Democrats have maintained the delusion that the country is rapidly changing in their favour, thanks to the ever-increasing percentage of female and minority voters10. Latinos currently compose 17% of the American population, and that share is projected to reach 31% by 2060.11 This, in conjunction with many other demographic factors, has somehow assured the Democrats that a national “blue” majority is inevitable.

In actuality, the country’s ongoing shift towards social liberalism does not necessarily coincide with a shift towards any particular party. It is why voters across the country approved numerous liberal ballot measures—including legalisation of recreational marijuana use in Alaska and Oregon, mandatory background checks on firearm sales in Washington, sentencing reform for non-violent criminals in California, and minimum wage hikes in four solidly conservative states12—while simultaneously rejecting the party associated with such causes. It is why many left-wing Americans are as alienated by the Obama Administration as those on the right. Most of all, it is why the United States’ two-party system is unquestionably broken, failing to represent its citizens’ wide array of ideologies and trapping the country in a perpetual state of lavish campaigning and political brinksmanship.

As of May 1, 2014, 20 million Americans had gained coverage under the Affordable Care Act and the proportion of uninsured U.S. adults had fallen to 13.4% from 18% in the third quarter of 2013

Alaska, Arkansas, Nebraska, and South Dakota—four states represented entirely by Republicans in both the U.S. House of Representatives in Senate—all voted to raise their state minimum wage. In addition, Colorado and North Dakota resoundingly rejected measures that would have legally defined unborn children as people and thus paved the way for severe restrictions on reproductive rights.