The Path to Power: Israel’s Fight for Energy Hegemony in Gaza 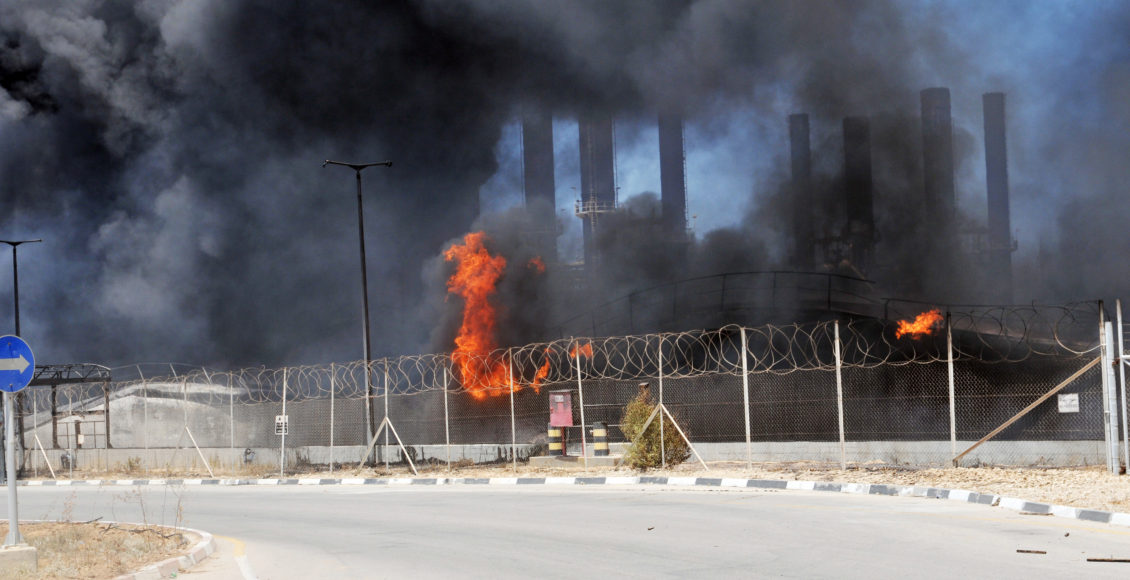 The Gaza Power Plant burns after being hit by multiple IDF missiles in 2014.
Share

In midsummer 2014, in the midst of carnage, Israeli air forces struck Gaza’s only power facility. “We need at least one year to repair the power plant, the turbines, the fuel tanks and the control room,” a technician reported to the Guardian at the time, “Everything was burned.” The Israel Defense Force (IDF) justified the target by accusing the plant of powering Gazan militants, but in reality, the strike changed little in the ongoing Gazan energy blockade. At the time Gazans could expect up to four hours per day of electricity; and while today that has increased, energy is still limited to less than 12 hours per day. The rest of the time they are subjected to roving blackouts that spread their limited electricity across the densely populated territory. This shuts down hospitals, water treatment plants, businesses, and schools all tactically rationing a power supply that is constantly dwindling.

Since 1967, Israel has, to varying degrees, controlled Gaza; a small Palestinian enclave located on the Mediterranean and bordering Egypt. In 2005 IDF personnel withdrew, but when in 2006 Gazans elected a hostile government, the IDF pivoted, mounting a blockade to surround the area and dictating every product, person, and electric cable crossing the line.

As a result of Israel’s blockade, Gazans began to see less and less electricity. Israel was willing to provide a limited amount, and the enclave could pay for even less. The Gaza Power Plant was built as a response to the energy deficit plaguing the region, but since its inception, it has failed to run more than one of the two turbines it contains. The fuel the turbines were developed to run on must be bought directly from Israel with aid from multilateral backers, but high prices have made it nearly impossible to do so. Due to the blockade, Israel has a monopoly over the energy industry in Gaza, and all resources must be funneled through them. Given the region’s extreme poverty, the state fails to secure adequate funds for fuel. Without fuel, the economy stalls, unemployment rises, and extreme poverty continues. The blockade has initiated a feedback loop that not only deprives an economy of its energy but a society of its hospitals, schools, and connections to the outside world. When Avigdor Lieberman, former Israeli defense minister, claims Israel is acting apolitically in this crisis, he avoids that critical loop. “They pay, they get electricity. They don’t pay, they don’t get electricity” he stated in 2017.  His duplicitous insistence that Israel is not a player in this transaction is bizarre, but there’s no doubt about his final statement. If Gazans can’t pay for electricity, they’ll get none, and as of 2019, Gaza is still in the dark.

As a result, the population has had to jerry-rig personal generators that power everything from cars to boats to homes and public buildings. These machines are not only inefficient and dangerous (the threat of random explosion runs frighteningly high), but they are also only temporary solutions. Coupled with Israel’s energy blockade is a spare-parts blockade. This includes industrial equipment which, if allowed, would give Gazan engineers the supplies they need to retain mechanical power, or at least to rebuild when their factories become IDF targets. Others have experimented with renewable power to develop energy autonomy, including solar panels, but these have similarly been eviscerated by Israeli military operations. Instead, engineers are left to meddle with increasingly rusting engines in a failed Israeli attempt to choke off support for their political regime.

Hamas—a party that has attacked Israel both violently and ideologically in the past—was elected to power in 2006. But when it failed to form an agreement with the West Bank’s Fatah party, it seized unitary control in 2007. Since then, Gazan energy has been held hostage to much larger political ambitions. While Hamas requests West Bank funds to help fuel payments, Fatah refuses by claiming Hamas as illegitimate. As has become a pattern, the Gazan populace are the ones who suffer. In 2018, Fatah agreed to resume payments, but this fragile offer is constantly under threat.

An obligational vacuum has developed with three parties—Hamas, Fatah, and the Israeli parliament—locked in argument over who has responsibility over its resolution and sparking excited debate in international law circles.  While the Fourth Geneva Convention clearly states that occupying powers must provide for the medical (and therefore energy) needs of occupied territories, Israel claims that, since 2005, it has not been an occupying power. So a catch-22 arises. So long as Israel does not have “boots on the ground” the Israeli High Court maintains they are not bound by the Convention. As soon as Israel sends troops into Gaza, as happened in 2009, 2012, 2014, 2018, and 2019, the power station becomes a target of war and can be destroyed. Israel maintains this strategy of regular intervention (its commanders call it “mowing the lawn”) while blocking off power cables until they withdraw, once again leaving Gazans to power themselves.

So the Israeli state wins on two fronts: First, it achieves its political aims of maintaining dominance over Gaza by cutting off energy supplies, and secondly, by securing annual payments to Israeli energy corporations worth up to ~$80,000,000 CAD. By exploiting a loophole in international law, Israel has managed to not only win victories against their political rivals but to nullify their industrial capacity. While the strategy has failed in its stated aim to provoke revolts against Hamas, it has been entirely successful in maintaining the status quo. It has incited increasing anger towards the Israeli state among the Gazan populace, but their slingshots and low-grade missiles can never rival IDF tanks, air force, or equipped army factions. And low-grade missiles are all they can manufacture with restricted daily energy allotments.

Since antiquity, wars traditionally included battles over resources, whether monetary or agricultural. Supply lines were attacked, farmland was burned. But contemporary politics has forgotten these fronts as common targets during conflict. International law fails to recognize energy monopolization as a potential weapon, or blockades as a form of occupation, naïvely pretending militaries don’t recognize their potential. Just as England colonized India for coal, U.S. invasions overthrew regimes for oil. Both ignored the lives and economies they stampeded on their path to energy dominance. Recalling the 1948 war between Arab countries and the newly-founded Israel, the country’s first prime minister David Ben-Gurion said “It was in [Israel’s] power to set a high price for our blood, a price too high for the Arab community.” Today Ben-Gurion’s diagnosis applies not only to the blood of the dead, but to the energy needs of the living.