The Pen and the Sword 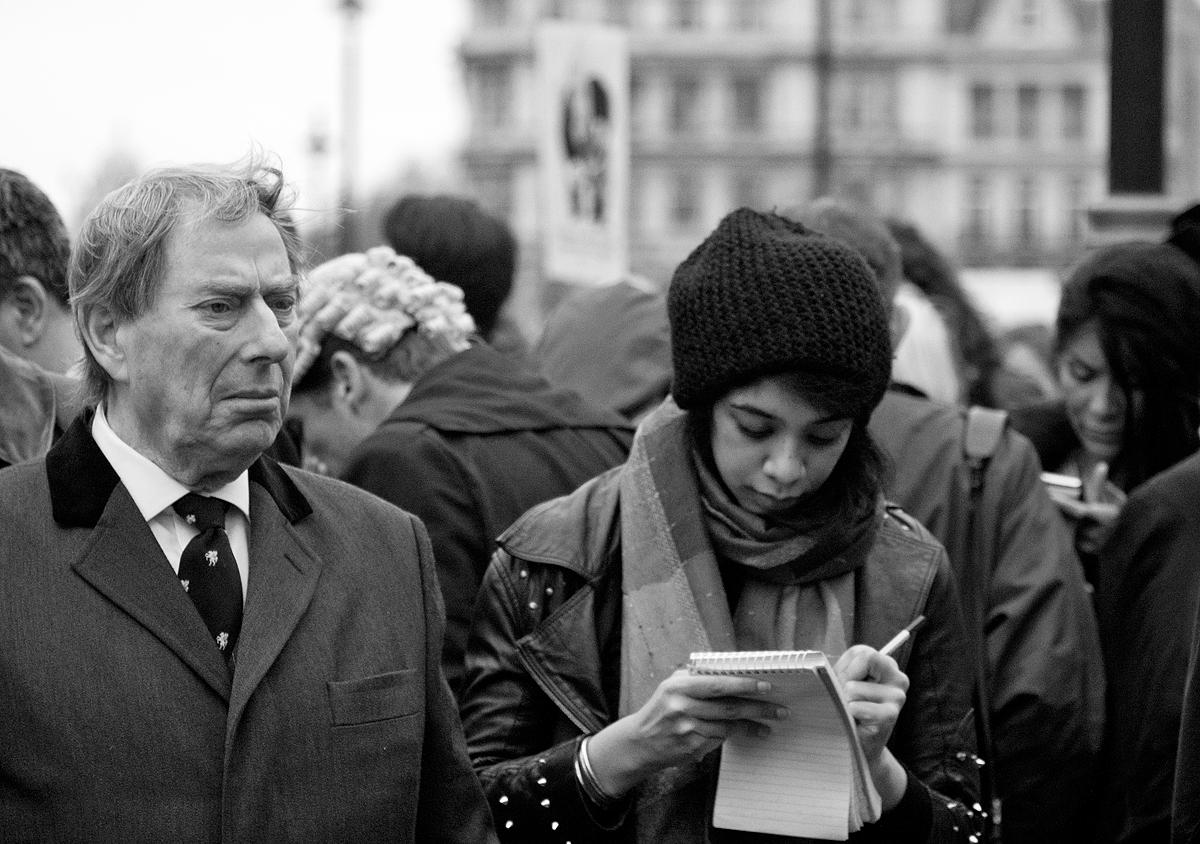 We need to talk about journalists.

As our storytellers, they largely stay behind the camera—pen or smartphone in hand—distancing themselves from what is unfolding in front of them. But is this neutrality an accurate reflection of their role? Are they really our bastions of objective truth, or are they merely our informants? The stories they tell hold a great weight and, accordingly, their power is one we need to take into account.

As it turns out, public wariness of the idea of objective journalism is not as significant as we might think. The groups that do recognize the power of the informant are those with power of their own. Whether rebel groups or states, political organizations of all stripes use their sometimes considerable clout to try to control the flow of information about them. This state of affairs is hardly a new one, but as the idea of what constitutes journalism in the digital era begins to blur, journalists—however we understand their role—are targeted in new and inventive ways.

So what did freedom of the press look like in 2015? While it has always been a concern, it topped of the agenda in the aftermath of an especially deadly and repressive 2014. That year, one of the worst in the 2000s for freedom of the press, had a remarkable number of journalist casualties—at least 80, and possibly upwards of 100, depending on index methodology. While this past year saw fewer journalist deaths, it was hardly a good one.

If anything, 2015 was the year in which we reacted to ongoing repression. Ideas of free speech and information dominated headlines and informed political responses following the first major journalistic crisis of the year, that of Charlie Hebdo. In the aftermath of the January 7 attacks in Paris, the reaction was immediate and visceral: “Je suis Charlie.” Soon it became clear that the attacks ignited a discussion on political correctness and free speech, which went beyond the confines of initial interpretations seeing the journalists as martyrs. The results of that discussion, while still murky, are perhaps best summed up by a French protestor’s sign: “Je marche mais je suis conscient de la confusion et de l’hypocrisie de la situation.”

Events like the Charlie Hebdo attacks underscored the importance of freedom of expression while also exhibiting its challenges. For instance, what constitutes a valid limit to freedom of expression? Do our standard responses to these crises change after we recognize the power of the press? Going further, how do we champion journalists’ rights without playing into the hands of powerful media conglomerates? At the opposite end, is it possible to rely on grassroots citizen journalism without seriously questioning its authenticity?

When looking at the problematic status of freedom of expression over the past year, and keeping these questions in mind, the basic facts are the following. First, threats to journalists are by no means limited to war zones or authoritarian countries. This means that Western correspondents are not only under threat when they leave home, as by some estimates, France outstripped Syria as the country with the most journalist deaths in 2015 (CJFE reported two more in the former than the latter; one must take into account, however, that journalists who would never venture to Syria would not think twice before entering France). As racial and political tensions continue to heighten in many Western countries, only time will tell if the journalists’ murders in the US and France are the beginning of a trend. Even if the killings subside, it is likely that the high-profile clashes with members of the press will continue. 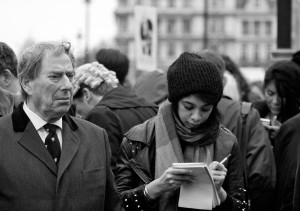 At the same time, 2015 was the year when the international community took action on the threats posed to freelancers in combat zones. With increasing competition from unofficial or online sources, the mainstream media now lacks the means for big operations. Accordingly, they take journalists off the payroll and use them on a freelance basis. Among developed countries’ journalists, freelancers face the greatest risk of persecution because of tenuous job security and lack of institutional oversight. In general, they are both more willing to take risks and less inhibited from doing so. The Dart Center’s Global Safety Principles and Practices was first introduced last February to try to improve the safety of journalists in light of threats. Since then, signatories include ABC News, CBS News, CNN, NBC News, PBS Frontline, and BBC. These discussions came in light of 2014’s numerous threats to freelancers at the hands of state and non-state actors. It also culminated in an information-sharing program spearheaded by BuzzFeed, and a census regarding a “freelancer insurance pool” by Agence France Press, among other initiatives aiming to make it safer to be a freelance journalist.

The journalistic contingent most threatened, however, is that of local journalists in systems without a free press. On the extreme end, either organized crime, a restrictive state, or rebel groups threaten journalists’ lives. This is the case in Mexico, where areas like Veracruz are incredibly dangerous for journalists who speak out against the relationship between cartels and the state apparatus. But persecution need not be fatal to be serious. In Argentina, controlling media laws frequently pit the government against media magnates and members of the press. While the plethora of unsolved journalists’ murders in the Philippines mark a state unwilling to take action. Quite often, the threat is most keenly felt from non-state actors like Nigeria’s Boko Haram. Sometimes it is difficult to tell from where threats originate, as in the murders of 5 journalists in South Sudan, which occurred in late January of last year. Despite the risks of living so close to the danger, local journalists—most at risk of persecution, repression, and death—are the least heard-of group in the Western world. Their safety is the subject of the fewest op-eds and of the least media coverage.

Although there is truth to these generalizations, there can be no universal portrayal of journalists, of their accomplishments and motivations. The story is not a simple one. Salaried journalists have different limitations than freelancers. Local journalists have different loyalties than foreign ones. In some countries, the media is an extension of the state. In others, they are diametrically opposed. Journalists can be hemmed in from all sides: the state, non-state actors, and journalists’ own superiors. The Israeli-Palestinian conflict is a good example of journalists facing pressures from conflicting interests, in this case those of Israel and Palestine, which themselves are not single-stranded. Just as journalists have different motivations for reporting on what they choose to, and tell their stories in different ways, the groups looking to limit freedom of expression also have their own reasons. This can involve anything from threats and murder to repression through arbitrary imprisonment; from targeting by both riot police and rioters to punitive measures in the name of national security or anti-blasphemy.

In light of this, then, where and how do these injustices occur? CJFE cites 77 journalist deaths in 2015, while RSF pins the figure to 64 journalists and 6 media assistants. Consistent offenders continue to be dangerous, with significant deaths in Syria, Iraq, Yemen, South Sudan, and Mexico. Some countries were bastions of slipping standards of a free press. Elections in Turkey, Burundi, and Bahrain coincided with crackdowns on free expression. The trend of areas mostly inaccessible to journalists has also continued, exemplified by the realm of IS, where journalists must either try to fulfill their mandate and risk death, or stay away and face their own limitations. Not to be outdone, Al Shabab has increased as a threat to journalists in northern Kenya. Since the Thai coup of May 2014, media closures, personal reprimands, and 2015’s Cyber Security Bill have all threatened the presence of an independent media in Thailand. Moreover, a recent report showed that Egypt and China are the worst in terms of raw numbers of journalists jailed. So while they occur around the world, and are fairly consistent throughout the years, the greatest injustices are tied to phenomena like elections and state instability.

A brief assessment of the status of journalists is difficult due to the depressing presence of material on their mistreatment. It is clear that, while freedom of the press has increased over the decades, most countries in the world are offenders of one kind or another. At the same time, the contradictory tendencies of mainstream media hegemony and of independent citizen journalism push us to an increasingly bipolar system. In the areas mentioned above—whether mired in conflict or merely repression—local journalists continue to be killed at an alarming rate, while in the Western world, we struggle over discussions on free speech and hate speech. It is not a rewarding time to be a journalist, and it is unlikely that this will change in our lifetimes.

In light of this reality, the supply of journalists willing to subject themselves to these injustices far outweighs traditional demand. As those of us who rely on the power of journalists, it is important to debate the finer points of their role, but most crucially, we must continue to rally political power behind protections of freedom of expression and the press. The threats both to freelancers and to local journalists are extremely worrying and continue to be thus. The international community does not need anymore journalists to martyr themselves. What the world needs is for people to listen, to care, and to act.

For more information about the threats facing journalists, there are many resources with statistics on journalists’ deaths, impunity for such deaths, threats to internet freedom, and crackdowns on freedom of the press. They include CJFE, IFEX, RSF, CPJ, IFJ, and Freedom House, among others.