The Power of the Pope: Can Humanity Unite for the Greater Good? 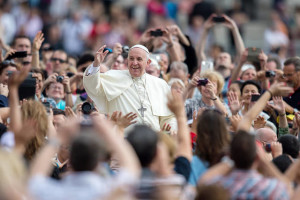 You don’t need to be Catholic to hear the validity and urgency of Pope Francis’ words. The power of the Pope’s call to action transcends not only the differences between people and policies of foreign countries, but also, more specifically, the socio-economic and political divide that is so deeply set in America today.

In his addresses to the U.S. Congress and to the U.N. last week, Pope Francis united religious and non-religious, Democrats and Republicans alike, receiving standing ovations from both parties in the audience [1]. This is especially notable in a time where individual ideology in U.S. politics is more about aligning with one’s party than about upholding one’s individual principles and the ideal of the common good.

Without involvement in political partisanship or foreign relation struggles, the Pope has no interests to protect other than his own integrity. Therefore, he has the ability to prioritize the well being of humanity in his position on all political, economic, and social issues. And Pope Francis does exactly this.

Pope Francis’ resonating request for compassion, regarding our treatment of our fellow human beings and of our environment, is at the heart of his speeches. In his address to Congress, he highlighted the Golden Rule, saying, “This Rule points us in a clear direction. Let us treat others with the same passion and compassion with which we want to be treated. Let us seek for others the same possibilities which we seek for ourselves. Let us help others to grow, as we would like to be helped ourselves” [2]. The genuine morality, altruism, and selflessness that guide his priorities empower the Pope’s influence by drawing on the basic humanity that connects us all, impelling people of different beliefs and backgrounds to do the right thing.

The Pope’s reference of the Golden Rule was directed towards the international treatment of immigrants during the current refugee crisis in Europe and the ongoing debate in the U.S regarding undocumented Latin American immigrants. These are complex and controversial issues, but in my opinion the Pope’s argument is correct. Specifically, the large numbers of Middle Eastern migrants arriving in Europe is causing significant stress for the unprepared European countries. However, like the Golden Rule, the philosophy of cosmopolitanism argues that the principles of justice imply a moral obligation to address the needs of all people, regardless of where they live, their race, gender, class, or citizenship [3]. Pope Francis takes this simple childhood rule and applies it to this complex problem. In doing so, he gently reminds us that it is our responsibility to respect these immigrants and to help provide them, to the best of our ability, the resources they need to improve their quality of life.

He warned Congress to resist “the simplistic reductionism which sees only good or evil; or, if you will, the righteous and sinners” [2] and to be “specially attentive to every type of fundamentalism, whether religious or of any other kind” [2]. The Pope is specifically alluding to building religious tolerance and an understanding that violent, extremist acts in the name of faith by some do not represent the faith as a whole. The significance of maintaining an open mind relates not just to faith but to politics as well. American ideologies have become reduced to good versus evil and issues reduced to black and white, creating an environment of the Republican Party against the Democratic Party in which stubborn judgment generates groundless animosity, hindering compromise and therefore progress.

While the Pope’s religious values do hold a strong influence over his judgment in certain controversial issues such as abortion, Pope Francis has taken giant steps overall to shift the church away from traditional conservatism and towards the progressive protection of individual liberties as well as the acceptance of science. This is seen in his position on topics such as homosexuality and climate change.

“A selfish and boundless thirst for power and material prosperity leads both to the misuse of available natural resources and to the exclusion of the weak and the disadvantaged,” [4] argued Francis as he earnestly encouraged world leaders at the U.N. to focus on caring for the needs of the environment and of the world’s poorest. We cannot ignore the global market competition and the unequal power relations it creates. The market is profit-driven and thus inherently motivated to exploit laborers. In this way the neoliberal economic order is shaping the lives of the poor, trapping them in a constant position of disadvantage and inequality.

The question to ask is how do we fix this- how do we change the dependency of our everyday consumption on uneven trade relations and exploited low-skilled workers? One option would be to start by enacting strict policies in the market, and specifically in areas such as the corporate responsibility to ensure the basic rights and safety of workers.

In order to work towards simultaneously reducing global poverty and achieving environmental sustainability, environmentalists have focused on the concept of sustainable development. The issue we now face with this idea is creating a clear action plan to identify the necessary steps to take next. As we have seen, economic growth alone is not the way to development. Improving exports might mean industrialization and economic development, but not necessarily reduction of poverty [3]. Development is multi-dimensional, encompassing human well-being, opportunity for individual growth, and freedom of choice. According to the Human Development Index, the three primary indicators of human development are health, education, and living standard. This perspective reflects Francis’ request to take care of the well-being of the poor and to “allow them to be dignified agents of their own destiny” [2].

Pope Francis’ influence on people across all backgrounds, regardless of faith, is undeniable. Coming from a person with his level of influence, his grounded principles are refreshing and inspiring, and sharply contrast so many current world leaders who seem to be motivated largely by self-interest. His messages will continue push people to recognize the urgency of universal brotherhood and of multidirectional and sustainable development. His power lies in his open-minded and compassionate approach to understanding the world and connecting with people regardless of faith, politics, socio-economic status, or culture to unite them in the name of the greater good.