The pro-abortion crusade in Argentina 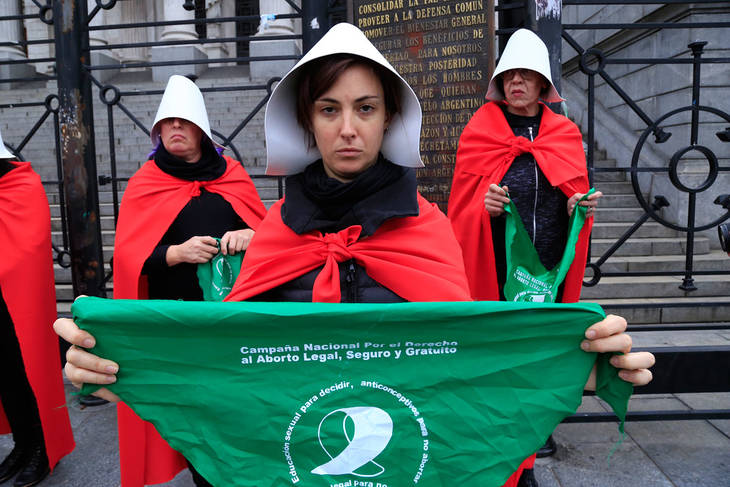 “’Better’ never means better for everyone… It always means worse for some.” We can find  this poignant statement in a passage from Margaret Atwood’s book, The Handmaid’s Tale. This best-known work of fiction is one of the most enthralling dystopian novels ever written. Just like George Orwell’s 1984 or Ray Bradbury’s Fahrenheit 451, the plot revolves around an ill-fated society in which citizens are subject to a totalitarian regime that has deprived them of their fundamental rights, including freedom. In The Handmaid’s Tale, however, there is neither Orwell’s omnipresent Big Brother, nor Bradbury’s “firemen” that burn books. Rather, at the heart of Atwood’s novel, a theocratic and puritan state treats the few fertile women that remain in Gilead territory (the ‘handmaids’) as mere incubators in order to ensure the survival of the nightmarish social regime.

Believe it or not, this speculative fiction is actually based in truth. The author has reiterated throughout the years that she took real-life models for her literary creation. It is not difficult to make the connection between Atwood’s tale and the precarious situation of millions of women today. In fact, the Argentinian women that appear on the photo above are wearing the emblematic clothing of Atwood’s handmaids. This is a phenomenon that has arisen across the globe. In Argentina, these women are rallying to demand the recognition of their right to decide what they do with their own bodies. Despite having been approved by the Argentinian Congress a few months ago, on August 9th the senate tragically rejected the bill for the legalization of abortion during the first 14 weeks of pregnancy. This loss led to the disillusionment of millions of women who had already taken for granted the support of the authorities. Apparently, sixteen hours of debate were not enough for the hierarchs of the nation to sympathize with a cause that is both fair and necessary.

The fact that this happened in a nation that has always been at the forefront of progressive ideals and liberal culture in Latin American is as painful as it is disappointing. Fortunately, the number of personalities who have protested against the final decision is growing, both inside and outside of the country. Margaret Atwood herself (who gave a conference at the National Library in Buenos Aires last year) discussed the issue on Twitter, exhorting the Vice-president Gabriela Michetti to not ignore the thousands of deaths that take place every year due to illegal abortions in Argentina. Moreover, she was adamant that preventing a woman from deciding whether to undergo an abortion or not constitutes a form of slavery. While perhaps controversial, the argument is gaining ground. Octogenarian senator and filmmaker Pino Solanas challenged the patriarchal notions of “the disposable woman, the supervised woman, the infantilized woman”, and filled many people with hope, even after the senate’s ultimate decision became public.

Oppressive legislations only contribute to an increase in the death toll caused by abortions performed in clandestine conditions. Last year, a report from the World Health Organization (WHO) revealed that every year there are roughly 25 million clandestine abortions. The vast majority of them occur in underdeveloped or developing countries that penalize abortion and, in most cases, lack the minimal medical and juridical requirements to put abortion legalization into effect. Indeed, according to the WHO and the Guttmacher Institute, 97% of these abortions took place in Africa, Asia and Latin America, These life-threatening methods can potentially lead to uterine perforation and bowel infarction. According to Amnesty International, “more than 3,000 women are reported to have died over the last 25 years as the result of unsafe abortion” in Argentina.

So what do the anti-abortionists (the “pro-life movement”) have to say in Argentina? Like most conservative groups, they insist that the embryo has constitutional rights since conception, and that the interruption of pregnancy is  an inhumane act. In a similar vein, the Catholic Church remains one of the main adversaries of free, legal abortion within the first 14 weeks of pregnancy. In one of his sermons, Cardinal Mario Aurelio Poli stated that abortion “will always be a tragedy” and he asked senators to “safeguard the right to life of all, especially the weakest and most vulnerable.” In addition, Pope Francis drew a parallel between abortion and the Nazi-era eugenics program: “We do the same as the Nazis to maintain the purity of the race, but with white gloves on.” These comments represent the inflexible worldview that characterizes (or, rather, continues to characterize) one of the most prominent religious institutions in the world. I argue that we have a collective responsibility to ensure the minimum conditions for respect of women’s autonomy, and more generally, tolerance for fellow human beings. Reproductive rights cannot be an exception to our respect for human dignities.

I met Margaret Atwood in the fall of 2016. She was signing books after her Beatty Memorial Lecture at McGill University. When I approached her with my copy of The Handmaid’s Tale, we somehow ended up talking about the weather. I told her I still had trouble getting used to winter in Canada. She looked at me with her sparkling blue eyes and told me, as if in a whisper, that I should not worry, because man is a creature of habit. Despite the historical reluctance of the patriarchal system to make fundamental concessions in favor of the female gender, change is happening. Perhaps it is rather slow and vertiginous, but it is happening all the same. As Senator Solanas said in the Argentinian Parliament, let us not fall into “the culture of defeat,” because a promising tomorrow awaits us. A tomorrow in which patriarchy, finally cornered, will break into pieces, and burn like the books of Bradbury’s world.