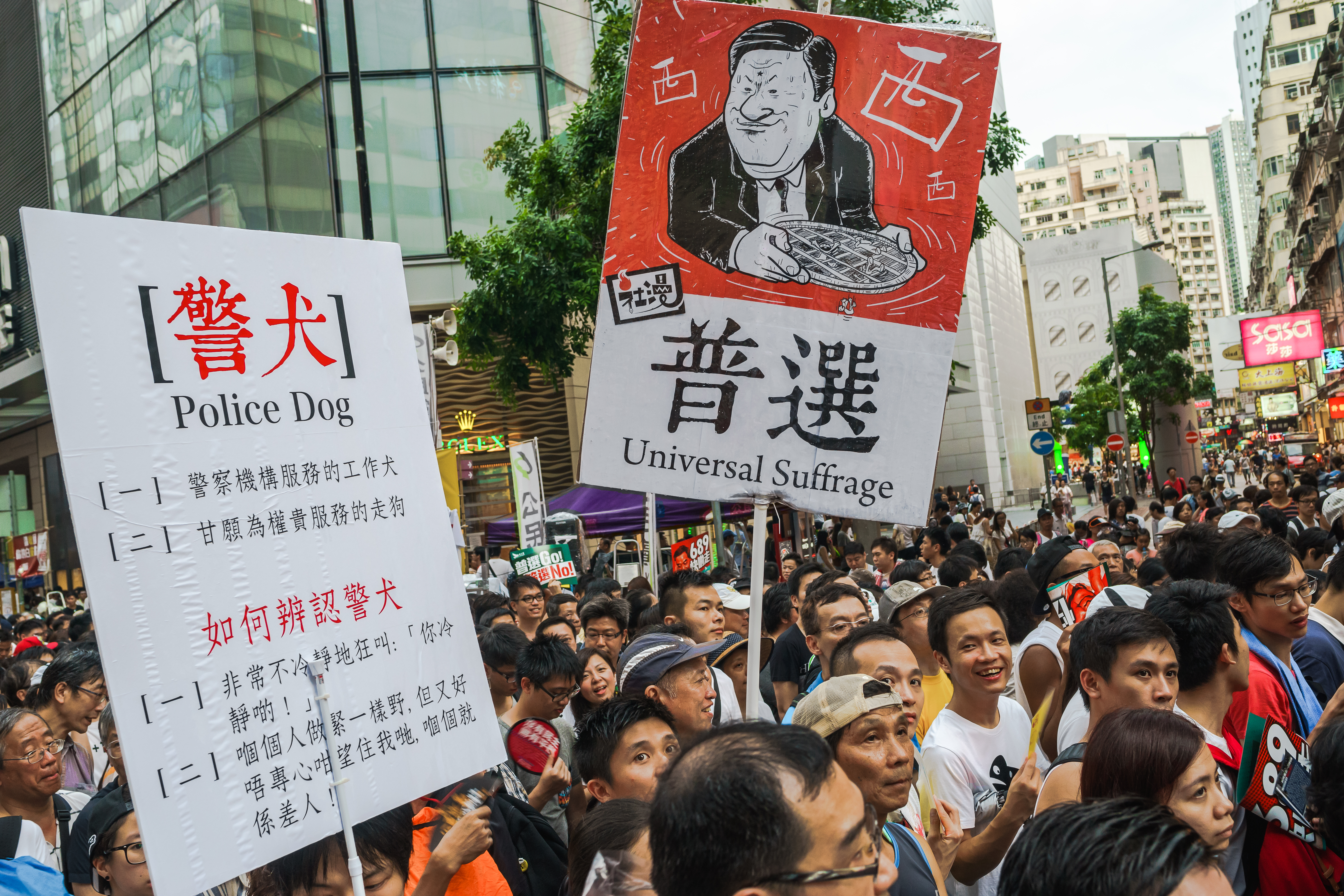 The residue of British colonial rule in Hong Kong remains since the transfer of sovereignty of Hong Kong to China in 1997. The governance between China and Hong Kong is one of the “One Country, Two Systems,” principle, which identifies Hong Kong as the Special Administrative Region of China, allowing it autonomy in all affairs aside from defense and foreign relations. In the Sino-British Joint Declaration, Hong Kong Basic Law indicated that the implementation of universal suffrage is the ultimate goal, and projected its establishment by 2007 (Hong Kong Basic Law, Ch.1 Article 5, Ch.4 Article 45). However, the failure to finalize its framework in 2003 has postponed fully functional universal suffrage to 2017. Hong Kong’s citizens’ concerns over the stability of the “One Country, Two Systems” principle have only intensified over the ten year delay.

The pressing issue of universal suffrage is in the division between those who believe in consolidation with China, and those who want democracy throughout Hong Kong. The Election Committee presently screens chief executive candidates who are running for elections, and then elects from the candidates. This has led to uneven political distribution, as the Pan-Democrats struggle to nominate candidates, and all current elected officials are favoured by Beijing. Limited to only 1,200 members, of mostly pro-Beijing officials, the Election Committee makes decisions for 7.2 million people. The new proposal by the government would have a separate committee which would nominate the candidates. Citizens will vote their new chief executives from the nominated pool. This option does not encompass universal suffrage wholly, as citizens cannot nominate the candidates, which would most likely reflect Beijing values. The International Covenant on Civil and Political Rights offers a genuine democracy which allows citizens “take part in the conduct of public affairs, directly or through freely chosen representatives,” and removes the exclusive powers of the Election Committee (Article 25,1966).

A Pan-Democrat group, the Occupy Central with Love and Peace (OCLP) campaigned for such a system. It held an unofficial referendum after Beijing’s White Paper earlier that month, which firmly reiterated China’s control over Hong Kong through the adoption of hard-line, non-confrontational approach towards political matters in Hong Kong. The Chinese government declared the unofficial referendum as misguiding and illegal, polarizing Hong Kong society. Yet, 87.8% of the voters believed that the legislative council should veto the government’s proposal if it is not up to international standard. This suggests that the majority of the eligible voters stand against the proposal of having a nominating committee.

As the Beijing officials stand resolutely against the international standard proposal of universal suffrage, stalemate ensues. One option is for the Pan-Democrats to keep the broad-based universal suffrage and slowly work towards reforms. However, concessions may mean that universal suffrage will never reach international standard unless there is a major shift in democratic reform within the Chinese government. Contesting ideologies have kept Hong Kong chaotic this past year, leading to a lack of the unified voice needed to negotiate with Beijing.

Furthermore, the political atmosphere brings uncertainty to Hong Kong’s economic future. Beijing officials claim that foreign investors would be reluctant to engage with Hong Kong, if the Pan-Democrats, especially the OCLP, continue their civil disobedience and jeopardize the economy. However, this civil disobedience does not have any direct economic effect on Hong Kong’s economy — in fact, it has been developing steadily for decades, even during major political instability and riots present in British rule. On July 2nd, 2014, the day after the annual pro-democracy demonstration, the stock market peaked. This financial success is due to its low taxation and free trade, traits which grew out of its economic autonomy from China, despite their close mutual business relationship. Potentially, Hong Kong’s economy is at risk for Chinese interference if the pro-Beijing Election Committee chooses the Chief Executive.

The 2017 universal suffrage is a critical crossroad in determining the democratic fate in Hong Kong. It will reshape relations between Beijing and Hong Kong, as it will test the validity of the autonomy set in the Sino-British Joint Declaration. Nevertheless, Beijing’s reluctance is understandable, as 2017 will set precedence for Democratic groups in the rest of China to push for change in the established system.

4. The Basic Law of the Hong Kong Special Administrative Region of the People’s Republic of China.