The Punisher: the Filipino Peoples’ President 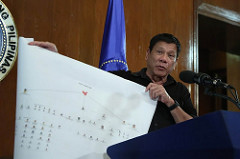 Last May, the Philippines had its presidential elections, and winning by a significant margin was Rodrigo Duterte, a former mayor in the city of Davao in the south. It has only been five months since he’s been in office, and the president has developed a world-renowned reputation for his harsh policies and un-presidential behaviour.

As mayor of Davao city for more than two decades, Duterte was known for his strict and extreme measures for fighting crime. Earning his reputation as “The Punisher,” Duterte supported, and was speculated to also be part of, a vigilante group called the Davao Death Squad. This group is known for extrajudicial killings and executing them in extreme ways; the president even admitted to throwing a drug dealer out of a helicopter.

As president of the Philippines, Duterte has declared a war on drugs. He believes that one of the main problems the country is facing is the prominence of the drug trade in the country. It is true that young men are recruited to sell narcotics on the street, and women flying abroad are exploited as drug mules to smuggle narcotics into other countries. This issue is one that needs a resolution; however, Duterte’s harsh policies and methods have left the Filipino citizens to doubt whether or not this is the correct path.

Since his election in May, there have been over 3,000 people killed on account of being suspected drug pushers—some killed by the police during raids, others by vigilantes. These extrajudicial killings have been defended on the grounds that it is essential to keeping peace and taking down the drug market in the Philippines. Furthermore, the president has declared a state of emergency on account of lawless violence. This decision was triggered by the fact that his beloved Davao city was bombed on September 2nd, 2016. This situation has also been used to justify his harsh policies to achieve peace. Although this declaration has put the capital on high alert, the president reassures the public that he does not want to declare martial law, especially after the Philippines’ experience with former president Ferdinand Marcos.

Although the Marcos family has a horrible reputation in the eyes of most Filipino people, Duterte has close ties with Ferdinand “Bongbong” Marcos Jr., the son of the former dictator. He was second in the running to be his vice president.

Duterte admits that he admires his predecessor, and he wishes to keep his close ties with the Marcos family. Last month, Duterte approved the family’s request to bury the former dictator in the Heroes’ Cemetery (Libingan ng mga Bayani). This cemetery serves to commemorate brave soldiers, national artists and scientists, and former presidents. He argues that Marcos is qualified to be buried there because he was a soldier and a president. Marcos’ preserved body is to be moved to the cemetery from his air-conditioned room in his hometown of Batac, Ilocos Norte. Various protests have arisen from this decision. Citizens against this decision urge others not to forget the atrocities and crimes committed against them during Marcos’ reign.

Since Marcos declared martial law in 1972 after the attempted assassination of his defense minister, which was revealed to be staged, hundreds of thousands of people were killed, tortured, or jailed on unreasonable grounds. The media was censored, and political activists were kidnapped and never seen again. Elections were rigged and Marcos was in power for over two decades. During his reign, billions of tax dollars were squandered and put to personal use. To this day, the government has been unable to retrieve all of the stolen money that the family put into offshore accounts. After the assassination of Marcos’ opposition leader and his victory in the snap elections, mass protests, known as the People Power Revolution, led to the dissolution of his regime.Despite all of this, there are still loyalists to the Marcos family, president Duterte included, for they believe that they prospered during the regime.

The international community has condemned Duterte’s actions with the war on drugs, and they do not condone his decision to bury the former president in a place reserved for those who have served the country well. In regards to international relations, Duterte does not filter himself to remain on the good side of most of the country’s trade partners. For example, he has called president Barack Obama a “son of a whore” in Filipino as a warning to stay away from the topic of extrajudicial killings in their scheduled meeting. Obama cancelled their summit in Laos after hearing these public statements. Although some people would applaud the president for not censoring himself, it is difficult to maintain good political relations with other countries if Duterte continues to insult and threaten other world leaders. This behaviour has led some people to question whether or not Duterte can truly lead the country. Even if he is able to control the drug problem and other internal affairs, his ability to diplomatically deal with other countries is questionable at the moment.

Despite all of the criticisms, harsh policies, and social blunders, Duterte was democratically elected as president. The citizens chose him as their champion, and a lot of people believe in his abilities; those who did not vote for him or who did not vote at all are left to follow his policies. Logically, he did not seem to be the right choice; however, he was somehow able to gain the public’s trust. He leaves one to question where the path of Philippine democracy is going: is being loud, vulgar, and unfiltered enough to get votes? Are tough policies the only way to solve problems?

One should vote based on who the best choice is, not who from the list would do the least damage. Sadly, this was how a lot of Filipinos voted in the last elections. The future of Philippine democracy is still left in the hands of the people, and hopefully they will be able to vote more wisely.