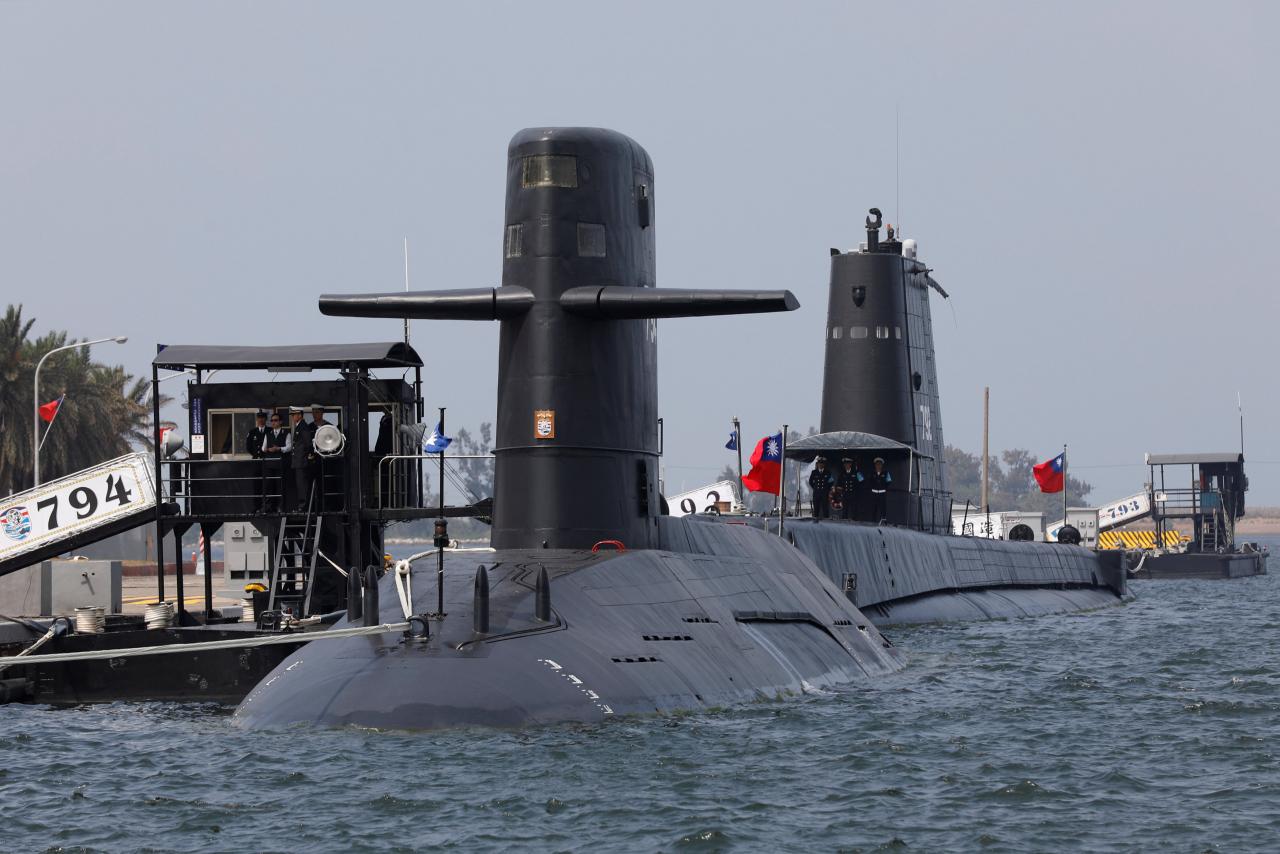 Submarines are seen at a navy base in Kaohsiung, Taiwan March 21, 2017. REUTERS/Tyrone Siu
Share

General Tso’s chicken is a popular Chinese dish found throughout North America, however, the dish just like its country of origin faces an identity problem. General Tso chicken does not originate from the mainland People’s Republic of China (PRC); instead, it originates from the Republic Of China, colloquially known as Taiwan.

For starters, Taiwan is the final vestige of Chiang Kai-shek’s Kuomintang government which fled to Taiwan in 1950 during the closing days of the Chinese Civil War. Its final “liberation” by the PRC was suspended due to the deployment of the US 7th Fleet into the Straits of Taiwan upon the outbreak of the Korean War, as President Truman sought to contain the regional conflict’s proliferation. The PRC immediately denounced the deployment of the 7th fleet as imperialistic and stated that Taiwan would always be a part of China. Since then, the PRC has threatened to employ force should Taiwan ever declare formal independence, yet increasingly has pursued sofer diplomatic tactics with Taiwan due to US military commitments.

The PRC’s approach to Taiwan was highly militaristic throughout the ’50s, leading to the First and Second Taiwan Strait Crisis. The PRC seized the Yinjiangshan and Dachen Islands off the coast of Mainland China during the first crisis, directly leading to the Formosa Resolution of 1955, in which President Eisenhower promised to protect the sovereignty of Taiwan. To this end, the Sino-American Mutual Defence Treaty was signed, stating the two states would defend one another should the other be attacked. However, the treaty omitted the defence of the Kinmen and Matsu island groups, and the PRC, under political pressure from hard-liners within the Communist Party, began bombarding the islands and prepared for military invasion. However, they were met by a powerful American rebuttal, with the US positioning five aircraft carriers near Taiwan, providing naval escorts to and from the besieged islands, and even threatened nuclear retaliation. Therefore, in the face of US military commitments, the PRC’s revisionist policy pertaining to Taiwan became multi-faceted; it sought to economically integrate Taiwan in lieu of direct confrontation, which it concluded was highly risky.

Even today, China remains wary of an invasion of Taiwan, as this would disrupt China’s access to global markets due to resulting international backlash. This would constitute a major issue due to China’s export-driven economy. However, it is injudicious to believe that continued global economic integration will diminish the PRC’s claims over Taiwan. Taiwan is strategically located in the Pacific, serving as a barrier to the PRC’s naval activities; this is exacerbated by the PRC’s narrative that success is only possible for the Chinese by forgoing basic human rights to the Chinese Communist Party. However, this narrative is directly challenged by Taiwan’s vibrant democracy, which fostered the growth of Taiwan into the world’s 26th biggest economy. To this end, the PRC seeks to politically isolate Taiwan and ensnare it into economic dependence on China to facilitate its absorption into the PRC.

Economically, Taiwan’s economy is heavily dependent on international trade, with exports serving as the most important drivers of economic growth. Yet, for the past 2 decades, Taiwan’s economy has been increasingly characterized by growing interdependence with China. China is currently Taiwan’s most important trading partner; 40% of Taiwan’s exports go to China, and Taiwan’s tourism industry is reliant on Chinese tourists. Meanwhile, the US has regressed and is now Taiwan’s third largest trading partner, representing less than 10% of Taiwan’s trade. In this climate, Taiwan is heavily vulnerable to economic warfare waged by hardliners within the CCP, with Beijing cutting off key diplomatic lines and applying strategic embargoes to Taiwan’s tourism, fishing, and farming to politically pressure President Tsai’s ruling party. Her party is troublesome to the PRC’s political interests, as it espouses that Taiwan is independent, cleverly stating that a formal declaration of independence is not required for a nation that has always been independent. President Tsai’s inaugural address called for a South-bound policy to reduce Taiwan’s dependence on China; her goal is to expand trade with ASEAN, Taiwan’s second biggest trading partner. However, Taiwan’s attempts to expand foreign trade are hampered by its political situation. 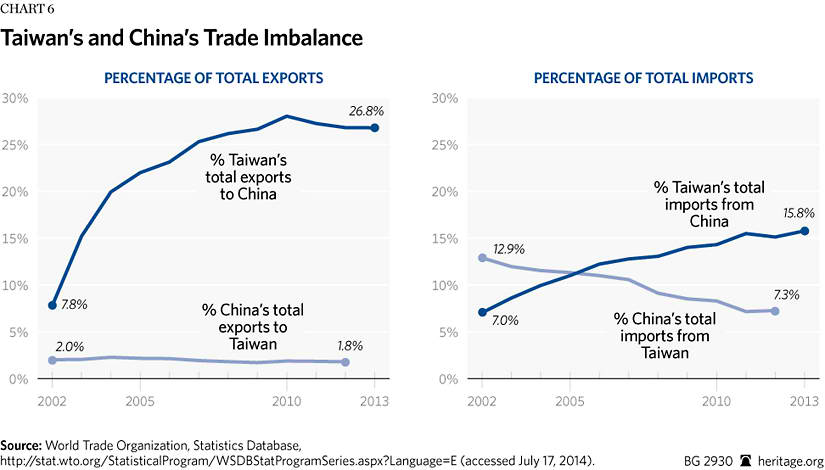 Politically, the PRC’s One China Policy requires Taiwan to sever its diplomatic ties as a prerequisite to diplomacy with the PRC. This has had the effect of ostracizing Taiwan from the international community. Taiwan’s non-recognition by the United Nations as a sovereign state hampers military modernization efforts, as states are reluctant to provide Taiwan modern weaponry out of fear of raising Beijing’s ire. This ostracization means that Taiwan finds it difficult to woo foreign trade, with its efforts to strike trade deals with Chile and Malaysia blocked by Chinese vetoes in the form of political pressures and economic threats. China specifically threatened to reduce its purchase of Chilean copper and cut critical Chinese foreign direct investment (FDI) in the country should it enter into a trade agreement with Taiwan. In terms of military equipment, the European Union has repeatedly rejected Taiwan’s pleas for the purchase of desperately needed modern submarines due to fears over disrupting relations with Beijing.

Even the United States under President Jimmy Carter, once Taiwan’s most vocal defenders, agreed to the One China policy in 1979 during warming relations with Beijing and severed formal diplomatic ties with Taiwan. During the Carter administration, the Taiwan Relations act of 1979 guaranteed continued support for Taiwan and informal diplomacy exists today between Taiwan and Washington. Most recently, US President Donald Trump announced a $1.3 billion arms deal with Taiwan. However, US support may be diminishing. On November 29, 2017, due to Chinese opposition, the US Congress backtracked on plans for port calls by the US Navy, instead stating to “consider the advisability and feasibility of reestablishing port of call exchanges between the United States Navy and the Taiwan navy.” Port calls being regular naval docking at certain ports, regular port calls at Taiwan would have certainly signalled Washington’s continued support for its ally. This act of accommodation towards Beijing highlights the fundamental struggle faced by Washington in balancing relations with Taiwan and China in an era of Chinese ascendancy.

For Taiwan, US appeasement of Beijing over Taiwan is a troublesome predicament, especially as the country faces an identity issue with 90% of Taiwanese believing they are Taiwanese rather than Chinese. Youth in particular staunchly oppose unification with China; nationally, a mere 1.5% support immediate Chinese unification. A national consensus exists that while economic interdependence with China is unavoidable, it carries extreme risks. This concern is visible in President Tsai’s pro-independence party’s (DPP) 2016 electoral victory. She beat the pro-unification KMT by a wide margin. Historically, KMT-led governments have signed more than 20 trade agreements expanding economic activities with China; contributing to Taiwan’s current dependence.

However, such independence will be difficult. Taiwan is politically ostracized by the international community and its proximity to China and increasing trade with them create interdependence. However, Taiwan can still retain its sovereignty through careful diplomacy. President Tsai has so far promoted a tacit alignment with the One China policy due to political reality. While she is attempting to make Taiwan less economically dependent, she has so far implied continued acceptance of a One China policy. However, increasing interdependence is unavoidable due to Beijing’s growing international clout. Cross-strait trade continuing to grow every year. Meanwhile, a confident, more assertive China enters international politics, establishing and expanding military bases in Djibouti, embarking on the One Belt, One Road initiative to extend its economic reach into Central Asia to Europe, and maintaining the world’s second largest defence budget.

For Taiwan to retain its sovereignty, it requires continued support from the US. American commitment, as during previous Taiwan Strait crises, is necessary for the maintenance of a loose Taiwanese sovereignty. However, this will be difficult in the face of diminishing US military presence in the Pacific, and a questionable Asia policy from President Trump, who appears to dither on how to approach China. Often jumping from confrontational to appeasing in the span of a week, Washington must get its act together and commit to a continued Asian pivot. Otherwise, the sovereign state of Taiwan and its 22 million people will find themselves increasingly isolated from the international community and eventually forced into unification against their wishes.