“The Rights of Man”: Patriarchal Citizenship Laws in Nepal 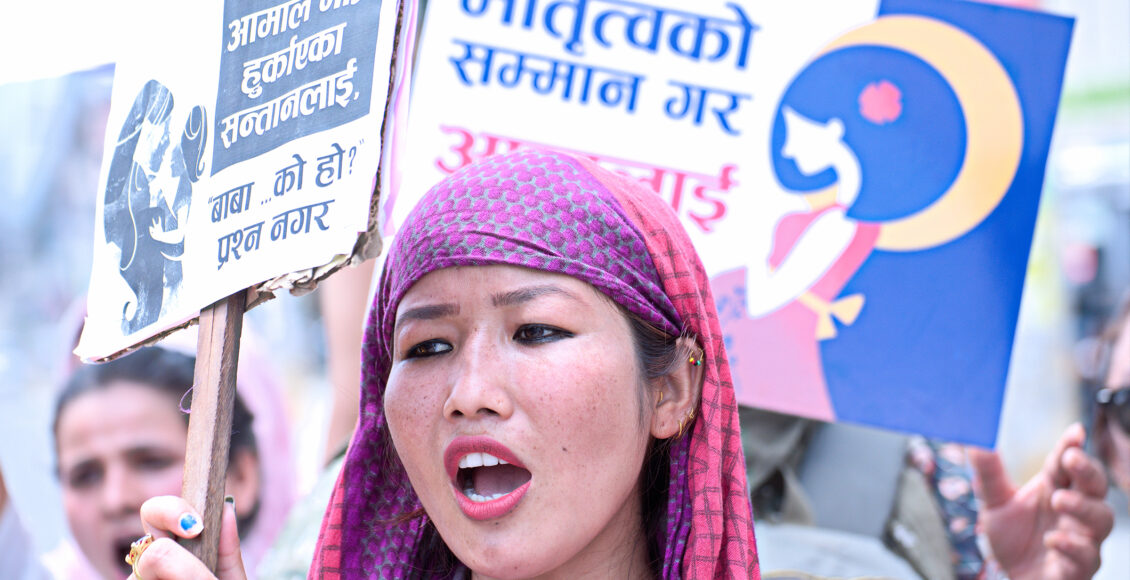 Globally, there are currently 25 countries that limit a woman’s ability to pass citizenship on to her child. Citizenship is easily assumed to be a universal right that does not discriminate on the basis of class, ethnicity, gender, race, and religion. This assumption is deceiving since, in most societies, citizenship laws are rooted in patriarchal norms and only grant citizenship rights to women once they fight for it through social mobilization. It speaks for itself that the social philosophy at the foundation of the nation-state constructed citizenship in terms of the “Rights of Man.”

In Nepal, citizenship laws treat men and women unequally, as women do not have the right to confer citizenship to their children or spouses while men do. According to The Citizenship Act of 1963, citizenship by descent could only be acquired if one’s father was Nepali at the time of the child’s birth. Following the nation’s civil war in 2006, The Second People’s Movement introduced a draft constitution that perpetuated discriminatory provisions on the basis of sex. The provisional constitution led thousands of women to protest in the streets of the capital, Kathmandu. In response to these uprisings, the interim government amended their proposed laws, allowing citizenship to be passed down by mothers as well. This amendment appears to be progressive in that it aligns with the Nepali government’s commitments under the Convention on the Elimination of All Forms of Discrimination Against Women (CEDAW), a body that asserts that women should have the same rights as men to confer their nationality to their children. However, Nepal’s membership with CEDAW has not resulted in meaningful changes to its discriminatory citizenship laws. This is due to a prohibitory clause which overrides the previous statement, claiming that persons born to Nepali mothers must acquire citizenship certificates through naturalization rather than birthright. This clause illustrates an unequal citizenship provision based on sex, as a child’s birthright is only put into question when considering the mother. Officially, there is a way of achieving citizenship through another avenue: naturalization. In reality, however, not a single person has been able to acquire citizenship through naturalization since its implementation in 2006. This reality is likely due to the legal hoops that Nepali mothers, whose children depend on their citizenship status because their father is out of the picture, must jump through. Additionally, the lack of enforcement of this law can be attributed to patriarchal traditions seeping into seemingly neutral legal bureaucracies.

Today, Nepal’s citizenship laws are outlined by the Constitution of 2015. While its preamble makes the sweeping claim to end all forms of gender inequality, once again, the very same discriminatory provisions on the basis of sex have endured. For example, Article 11.2(b) of the 2015 Constitution provides the equal right for women to confer citizenship. However, Articles 11.5 and 11.7, which immediately follow, apply special conditions, cancelling out the previous articles. For example, Article 11.7 of the constitution states that foreign men who marry Nepali women can only obtain citizenship through naturalization. Meanwhile, foreign women who marry a Nepali man are swiftly granted citizenship, and their children are given citizenship by descent at birth. In other words, a foreign woman with relations to a Nepali man is granted more citizenship rights than a local woman.

While this law applies to all Nepali women, it is important not to consolidate Nepali women into a universal category. Article 11.7 disproportionately targets members of the Madhesi ethnic minority who reside around the borderlands between India and Nepal and have cross-border matrimonial ties. Gender norms entrenched in the law confine women to the realm of reproductive labour—as the “bearers of the nation’s children”—and these patriarchal beliefs are embodied in Nepal’s citizenship laws and those who uphold it. For example, since naturalization is dependent on the officer in charge of one’s case, a Chief District Officer could deny a child born to a Madhesi mother and foreign male citizenship because “[the] ​mother dared to carry the seed of a foreign male.” Evidently, Nepal’s social and political values and the desire to “[preserve] the nation-state” are upheld at the expense of women’s interests and equality.

It is without question that these patriarchal and misogynistic citizenship laws undermine Nepali women’s identities and agency, subordinating them to the position of second-class citizens. Moreover, women’s interests and equality are often sacrificed in the name of protecting idealized social and political values as well as preserving the nation-state itself. In some cases, women are only given parenting rights when the husband is out of the picture. Even then, those rights only exist on paper and not in practice.

While the heart of the issue is gender inequality within Nepal’s citizenship laws, the issue transcends the oppression of Nepali women –– they also impact their children. Currently, because of citizenship laws that discriminate on the basis of gender, four million stateless people are living in Nepal. The story of Shabnam Rai encapsulates how these provisions shape daily life for mothers and their children. Rai was born and raised in Nepal but lacks citizenship papers because her father abandoned her family, and her mother cannot pass down her citizenship to her daughter. As a result, Rai could not present a citizenship certificate to apply for an entrance examination to become a doctor. To help her daughter, her mother tried to apply for a recommendation letter from the government but her application was rejected.

Rai’s story exemplifies that while there are channels through which children like Rai can obtain citizenship, they are tainted by patriarchal beliefs held by government officials. Children like Rai, many of whom are well into their adult years, cannot vote, get their driver’s licenses, open bank accounts, or enroll in universities, among other things. In the words of political philosopher and human rights advocate Hannah Arendt, “citizenship grants the right to have rights.” There are four million people currently living in Nepal who don’t have the right to have rights and, because of this, their lives are on pause.

Nepal’s constitution presents the illusion that men and women are equal under the law. Upon further examination, this vast and robust statement is followed by carefully and strategically placed legal provisions acting as obstacles in the way of women’s access to equal citizenship rights. Rewriting Nepal’s citizenship law is crucial. As mentioned, in 2006, social mobilization has already successfully accomplished legal reform when it comes to citizenship laws, specifically in the case of Nepal. However, unless legal reform is accompanied by a shift in the state ideology surrounding gender, the historical and current disconnect between law and practice will persist. Several organizations are already on the ground advocating for women’s rights and empowerment in Nepal. These include WOREC Nepal and Equal Access International’s initiative Sahi Ho!, which raises increased political will and supports women’s rights. The Men Engage Alliance is also notable because it works directly with men and boys for gender equality in Nepal. Grassroots organizations and social movements have the capacity to not only influence citizenship laws but shape the culture surrounding them.

Featured image: “Demanding citizenship in the name of mother.” by Ramesh Bhandari licensed under CC BY 2.0.