The Risk of a Flooded Isthmus 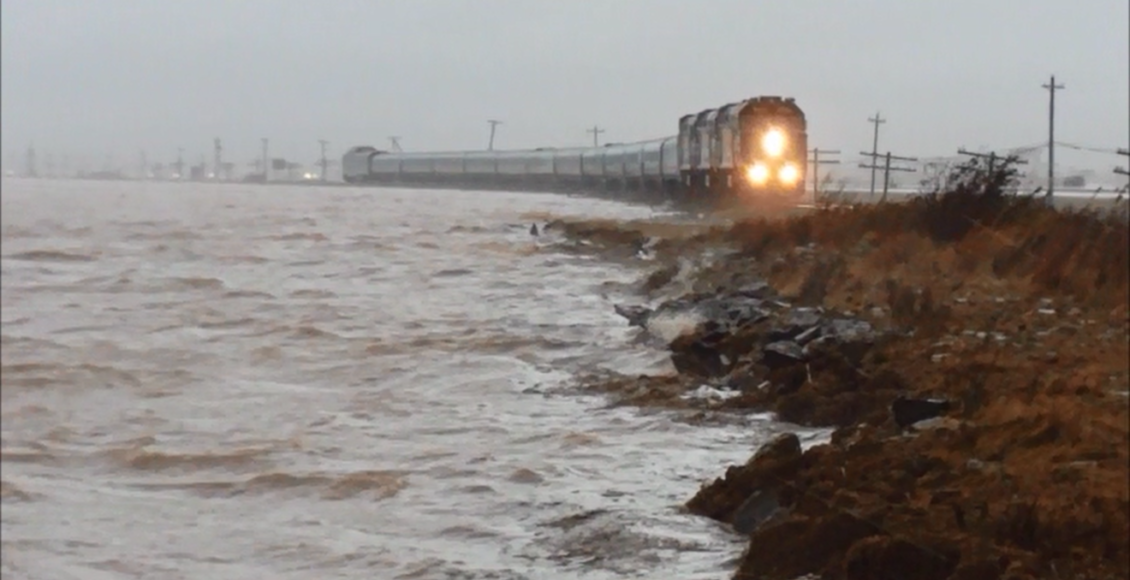 CN train when Bay of Fundy is at high tide. With permission from Bill Casey MP website accessed Oct 20, 2019
Share

This year’s historic spring floods in Ontario, Quebec and the Maritimes were a reminder of the costly and unpredictable damage climate change will bring. The Canadian Armed Forces was deployed to rescue households in distress and to build make-shift barriers with sandbags — but this “band-aid” emergency relief method is limited in what it can do. Sandbags can only be piled so high, and many flood plains are simply too wide to be protected in this way. Insurance companies called the regional flooding event “catastrophic,” estimating $25 million in insured property damage. The Montreal suburb of Sainte-Marthe-sur-le-Lac was especially impacted after a dike made out of dirt, gravel and clay burst. Water rushed in with enough force to cause trees to snap. Nearly 6000 people were forced to evacuate on short notice, some having only a matter of minutes to leave.

The story of the Sainte-Marthe-sur-le-Lac is a lesson for Canadians on the importance of preemptive action. Two years prior, a commission found that the dike protecting the community had been weakened by waves and needed maintenance. The mayor, Sonia Paulus, said “We knew very well what had to be done and we were about to do it.” The only thing missing was a sense of urgency, which is understandable given the difficulty of predicting severe floods. Now, post-flood, a new barrier is under construction in the municipality that will stand 1.5 metres taller than the previous structure and will be reinforced with steel. Residents are upset that their scenic lake views will be obstructed, but hydrologist François Brissette maintains that residents shouldn’t get too comfortable: the community lives in the lake’s flood plain, where excess water is naturally diverted in the event of high water levels.

Flooding occurs nationwide – in 2013, Calgary suffered tremendous flooding due to severe heavy rainfall, costing $6 billion in losses and property damage. However, some regions are at higher risk than others. Of particular concern is the southern side of the Chignecto Isthmus, at the northernmost point of the Bay of Fundy and at the border of Nova Scotia and New Brunswick. One bad flood could cut Nova Scotia off from the rest of the country, which, in addition to disrupting one of Canada’s most crucial trade routes, would also cause irrevocable damage to the sensitive land underneath the highway and to nearby communities. As early as 2007, the Intergovernmental Panel on Climate Change compared the region to New Orleans. The southern American city suffered unprecedented destruction when its levees failed during Hurricane Katrina, and the IPCC report warns that both regions are similar in that their dikes will be “provide progressively less protection unless raised on an ongoing basis.” The Chignecto region used to be exclusively marshland until the 17th century, when Acadians built dikes to block sea-water out and turned the area into farmland. In 1759, the Fundy dikes gave way, and locals had to spend years draining the marshland out again. With sea-levels estimated to rise a metre within the century and hurricanes like Dorian bringing about severe storm surges, there is an increasing chance that the famous tides of the Bay of Fundy will breach the dike—all that is needed is one severe storm.

Google Map of the Chignecto Isthmus. The area at risk of flooding is South-East of Sackville, NB, along the Southern coastline of the Isthmus.

Lying in the flood plain at the northern tip of the Bay of Fundy are several farming communities, parts of the university town of Sackville, the Trans-Canada Highway, and all electricity lines that link Nova Scotia to the rest of the country. If the port of Halifax and the island of Newfoundland were cut off from the rest of the country for a day, Natural Resources Canada estimates that the interruption would cost over $50 million in lost commerce. Some sections of the area are protected by dikes that are essentially mounds of dirt, but in other stretches of the shoreline the only barrier is the infrastructure of the CN Railway itself.

Aside from a Globe and Mail piece and articles in regional papers, the threat to Chignecto has received scant national attention – but locals know that it’s a serious problem. Former MP for the Nova Scotia side of the Isthmus, Bill Casey, claims on his website that “if the rail line were to be breached, the highway would wash out as well. The Port of Halifax would shut down and we would quickly run into shortages of food, fuel and materials to operate our lives.” Via Facebook he remarked: “We can see the effects of climate change first-hand in our riding. Rising sea levels threaten the Isthmus of Chignecto – the only land link between Nova Scotia and the rest of Canada. If sea levels continue to rise, Nova Scotia may become an island, and low-lying areas will be underwater.”

One Sackville-based environmental collaborative, Eco-Energy, has a project dedicated specifically to climate adaptation for those in the region: the Chignecto Climate Change Collaborative. The project aims to establish a network for better communication with various stakeholders and to educate members and the wider public about the challenges of climate adaptation. During the group’s latest workshop, one participant said “I can’t bring myself to get attached to my home. I feel I am lacking richness in my life, but I can’t bring myself to get attached anymore.” Yet another expressed frustration about the fact that the government allows development in flood zones when the risks are increasingly clear. I asked the Executive Director, Amanda Marlin, how the organization deals with the fact that individuals have different visions of what should happen, or what role the government should play in dictating where people live. She emphasized that the Collaborative has built trust among its members and opened up lines of communication that weren’t previously there. She said “the group keeps working together and everyone knows the benefits and strengths that come from collaborating.”

The mere risk of flooding is associated with increased anxiety, alcohol abuse, and other psychological effects. Local organizations have sought to ease anxiety while educating the public, motivating them to get politically engaged, and providing a space for dialogue. Several at Eco-Energy’s latest workshop specifically asked for further sessions to deal with grief, stress, and anxiety. Civic engagement on a local level can’t solve all problems, but dialogue and education can help empower locals and strengthen the sense of community.

After all, local groups are limited in their capacity given the resources needed to pursue logistical mitigation strategies, which—despite being straightforward—can only be solved in partnership with the federal and provincial governments. Either the dike protecting the coasts needs to be raised and rebuilt, or the community infrastructure, including the highway and homes that are in the flood plain, needs to be relocated. The federal government negotiated a deal earlier this year with New Brunswick and Nova Scotia, with each province paying $175 000 and Ottawa spending $350 000, for a study which is meant to produce options for Chignecto. There have been several bidders for the study, which is meant to be completed by February 2021, but none have yet been selected. Via email, NDP candidate Larry Duchesne for the Nova Scotia side of Chignecto said he believed the entire highway and railway would have to be moved to higher ground. In an interview with Jamie Burke, the Senior Manager of Corporate Projects for the Town of Sackville, Burke suggested that CN senior executives were aware of the vulnerabilities, but that they haven’t volunteered any potential solutions. Burke made clear that “you can’t just pick up the dike and move it, and you can’t keep adding on top of it, either… this is a very complex issue and any work that is going to be done is going to be major.”

If Sainte-Marthe-sur-le-Lac is a warning for taking preemptive actions, then New Orleans is a lesson in planning with the longterm in mind. After Hurricane Katrina, $14 billion was poured into a new levee network for New Orleans – but some argue the levees are already sinking, which means they could be inconsequential in another four years. It’s possible that no matter the invested cost or level of maintenance, barriers might simply not be enough.

Flooding is arguably one of the most pressing ways in which most Canadians face the economic and emotional consequences of the climate crisis. The federal Liberal government has pledged $2 billion to mitigate climate change for the next decade, but there is good reason to suspect that the actual costs nation-wide could rise much higher: economists tend to under-value the cost of climate adaption because models that rely on past experience tend to make conservative estimates about an uncertain future. After this year’s spring floods in Quebec, Premier François Legault offered homeowners in flood plains $200 000 each to relocate, but many insisted that it was not enough. As one participant in the most recent EOS workshop shared: “I live on a coastal road that floods. We live on my husband’s property that has been the family home for 150 years. There won’t be enough money to get him to leave.” While economists and taxpayers alike will struggle to find sufficient funds to support these new infrastructure projects, only those most vulnerable and directly affected will know the climate crisis’ true costs.

The feature image is included with permission from photographer Mike Johnson and accessed via Bill Casey’s MP website, Oct 20, 2019.