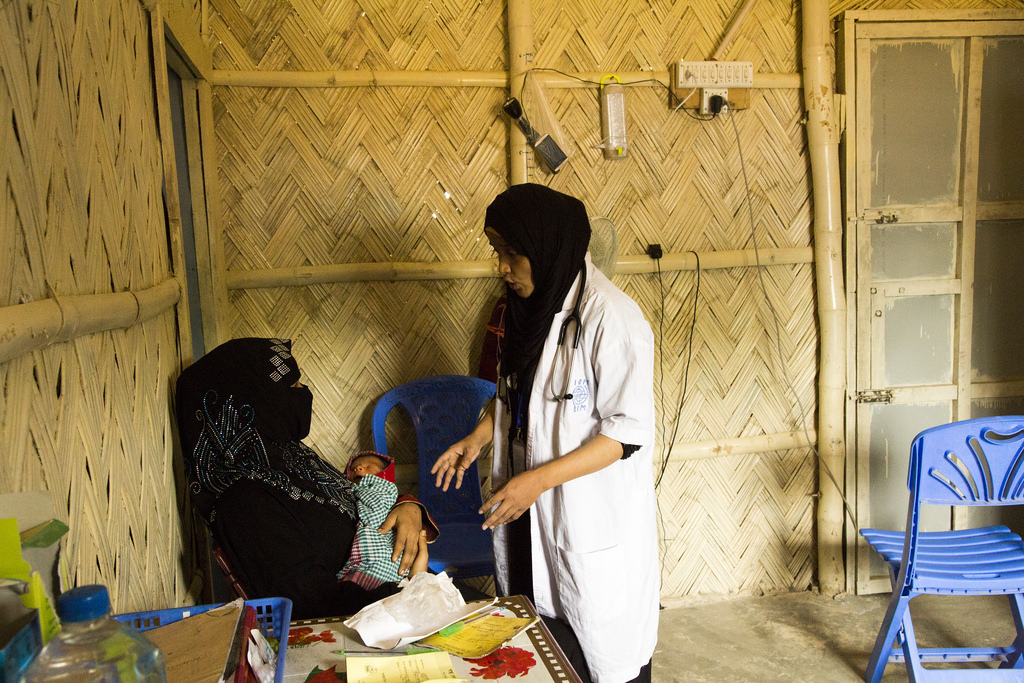 The mass exodus of Rohingya refugees out of Myanmar and into neighboring countries has attracted significant attention from the international community in the last year and has even been labeled by many as a bona fide form of ethnic cleansing. While the Rohingya population as a whole is being persecuted, young Rohingya women and girls are being especially targeted by the military factions, particularly through the use of sexual and gender based violence (SGBV) as a weapon of genocide. The basis for the conflict, and the underlying gendered emergency that has arisen as a result, can be traced back to the fundamental differences between the Rohingya and Myanmar’s majority Buddhist population that have existed for centuries.

Although the Rohingya minority claim to have lived in Myanmar from “time immemorial“, they have long since been persecuted by the country’s military for being a disloyal and unwanted “other”. Most Rohingya are Muslims, although a small number are Hindus, which has led many within Myanmar’s reigning Buddhist majority to claim that the Rohingyas are illegal Bengali foreigners who do not “deserve” Myanmar citizenship. This division became especially prominent during Myanmar’s plight for independence during the mid-20th century wherein the British colonial powers promised the Rohingya a “National Muslim Area“, in exchange for their support. The Rohingya accepted this offer, thereby siding against their own government, which further strained relations.

The ethno-religious tensions between the Rohingya and certain government factions, notably the military, increased following the military coup in 1962, in which the military instated themselves as the country’s de-facto government and passed a law that formally stripped the Rohingya of their Myanmar citizenship thereby leaving them unprotected and open to further persecution. International pressure eventually resulted in the military re-granting the Rohingya a pseudo-form of citizenship so long as they registered themselves as Bengalis – not Rohingyas, which would mean accepting status as illegal residents. In 2015, following Myanmar’s first quasi-democratic elections in half a century and the victory of the National League for Democracy (NLD), the country’s most progressive political party, many were hopeful that true national reconciliation would finally be on the horizon, but a handful of constitutional restrictions, passed by the military while in power, ensured that the army would retain power within the new government. One term in particular placed the military as full controllers of the country’s security forces, which, due to the decentralized autonomy of the force’s commander-in-chief, meant that the military would therefore be at liberty to act independently from other branches of government, including the majority NLD party and their leader Aung San Suu Kyi.

This newly-secured, independent power allowed the military to continue targeting minority groups, including but not limited to the Rohingya, in a twisted effort to demonstrate their dwindling authority. These demonstrations began as smaller-scale offenses, including rape and assault, but on August 25th, 2017 the Rohingya rebel group, the Arakan Rohingya Salvation Army (ARSA), planned and executed a retaliative attack against 30 police posts and an army base, which resulted in an immediate cross-fire between the Rohingya fighters and the military. While some Rohingya had already begun fleeing their homes prior to the August 25th attack, the escalation in violence and the military’s xenophobic “clearance operation”, in which they swore to persecute and annihilate those responsible for the attacks through the use of guerrilla warfare and arson, has forced an even greater number of Rohingyas from their homes. While some Rohingya chose to stay within their country’s borders, others have had no choice but to flee across the border into neighboring countries, such as Bangladesh.

While the life of any refugee is unquestionably difficult, women and girls often experience even greater hardship than their male counterparts. In Myanmar, the military’s “clearance operation”, has forcefully removed families from their homes through using many different tactics, one of which being the use of SGBV and subsequent psychological warfare. According to NBC News, international groups have reported that the military is using systematic rape, wherein women are the primary targets, to “help drive away the country’s Muslims.” This report has been corroborated with numerous accounts of gang rape, sexual torture, and physical violence, most of which exclusively targets women. There have been horrific accounts of SGBV violence, such as Rahima, a 15-year-old Muslim who, while fleeing her home alone, was captured by armed forces who kept her in the jungle for two nights gang-raping her and smoking methamphetamine to sustain the torture.

SGBV such as sexual assault, rape, and genital mutilation is also used within the refugee camps. The Bangladesh government restricts the use of long-acting contraceptives by only permitting doctors to prescribe them to women with home addresses, thereby preventing any female refugee from being eligible. As a result, a higher percentage of female rape victims become pregnant, but are often prevented from coming forward, whether it be for justice or, more commonly, if they need medical assistance, due to the personal shame associated with the social and religious stigmas that exist in their families and communities. For women that do come forward, they are often penalized by the lack of available funding, which further restricts their access to medical help. As a result, many women experience preventable complications during, as well as after, childbirth, with many cases even resulting in maternal and infant mortality.

While rape is common in many refugee camps around the world, humanitarian aid workers at the Rohingya refugee camps in Bangladesh claim that the cases of sexual abuse within the Kutupalong and Jamtoli refugee camps outside of Cox’s Bazar are some of the most brutal and inhumane cases they have ever seen. Aerlyn Pfeil, a board member of Doctor’s Without Borders, wrote that she had never heard as many stories of women being “publicly raped and then killed” than at the camps in Southern Bangladesh. In addition to the physical trauma endured by these women, they also face significant emotional trauma for which hardly any services are provided.

Women in the Rohingya refugee camps are also being commoditized and hyper-sexualized in arranged, transactional marriages. An article published by the Guardian found that Rohingya girls, as young as fourteen, were, and still are, being traded as wives in quid pro quo-style arrangements wherein a family will trade a daughter in exchange for food. The participating families that were interviewed told the journalists that, had they remained in Myanmar, they would have waited to “find their daughters a husband” until the girls were much older, but due to the extenuating circumstances and lack of food in the refugee camps, they had no choice but to give up their daughters as teenagers. In fact, among recent reports, 94% of female Rohingya refugee respondents claim that they did not make decisions about their current marriage, and 45% of these women said they were married as children. These women are then subjected to extreme kinds of violence, including sexual abuse, as well as isolation and confinement. In the same reports, 42% of the surveyed women reported to spend an average of 21-24 hours inside because their husbands did not want them leaving the house as they believed that exposure to the outside world would increase their wives’ leadership and decision-making capabilities, which would be unacceptable.

It is hard to know when and how the Rohingya refugee crisis will end. The Bangladesh government has been largely united in their support of the Rohingya refugees, but the Southeast Asian nation lacks the wealth and infrastructure to deal with a disaster of this magnitude in the long-term. Many claim that it is the responsibility of the NLD government and their leader, Aung San Suu Kyi, to take action against the military and put an end to the violence. Others claim that the supposedly-liberal government has no control over the relatively uncurbed power of the military, and any effort to implement checks and balances is utterly futile. Instead, many urge the non-military factions of government to reach out to international actors to develop an approach that would put specific pressure on the military to stop persecuting minorities and punish violent actors for their crimes. While any kind of help is greatly needed, it is imperative that the solution to the crisis specifically address the sexual and gender-based atrocities that have been, and continue to be, committed both by the military as well as by refugees in the camps.

Allegra Mendelson is a U1 student at McGill University pursuing a double major in Economics and Religious Studies.

This article has been edited by: Thea Koper