The Saudi Butchery In Yemen And The World’s Apathy 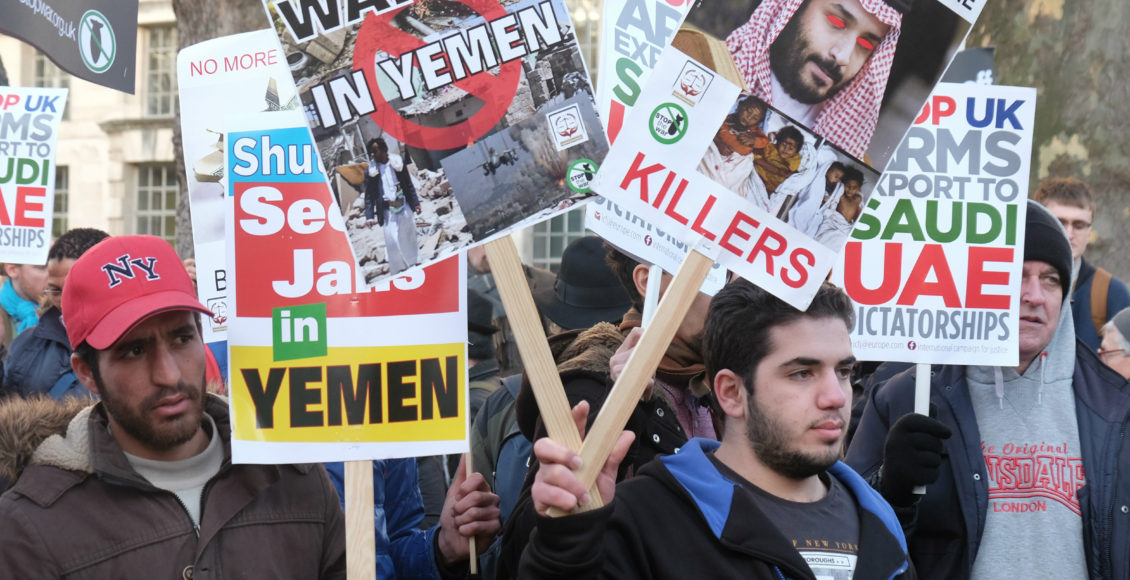 The cold-blooded killing of the journalist Khashoggi, however gruesome, pales compared to the brutality and gross human rights violations Saudi Arabia is committing in Yemen. The Saudis are deliberately preventing food and medicine from reaching areas where children are dying from starvation or disease. Their indiscriminate bombings are killing thousands of innocent men, women, and children, leaving whole communities in ruin. The saddest part of this unfolding tragedy is that the US and other Western powers are supplying the Saudis with the weapons they need to massacre the Yemenites, who are trapped in this proxy war between Saudi Arabia and Iran (which neither can win), and the Yemenites will continue to pay with their blood.

The butchering of Khashoggi in the Saudi consulate in Istanbul is but a manifestation of how vicious and cold-blooded the Saudis can be. Western governments must remember that silencing a journalist by slicing him to pieces is not only an assault on the freedom of the press, but an assault on us all as human beings. This bring us back to the merciless war in Yemen that defies any logic.

Since 2015, the Saudis have led a coalition of mostly Arab states to fight in Yemen’s civil war, backing the ousted government against the Houthi rebels—a Shia-affiliated group with the full support of Iran. The following statistics are not mere numbers. One has to graphically imagine what is actually happening to the multitude of Yemenites to grasp the magnitude of a war that has shattered a nation to the ground.

Out of a total population of 28 million people, 22 million are in need of humanitarian aid. Nearly 5.2 million children are starving to death, and nearly one million are believed to be infected with cholera. Over 8 million people are facing famine, and 2 million are displaced and deprived of basic needs.

Anyone who has followed the nature of this proxy war and its long and short-term implications will attest that this is not a winnable war. After 3.5 years, neither the Saudis nor the Iranians have made any significant progress, and there are no indications that either could gain the upper hand any time in the foreseeable future.

Sunni Saudi Arabia is determined not to allow Iran to have any foothold in the Arabian Peninsula; that includes Yemen, which borders Saudi Arabia to the south. Shiite Iran is determined to expand its regional influence, and has seized the opportunity in the conflict between the Houthis and the recognized government to interject itself on behalf of the Houthis.

Sadly and tragically, both governments have badly miscalculated each other’s resolve, except that the Saudis, who have a higher stake in any final outcome, adopted a no-holds-barred strategy in its execution of the merciless war.

If left to their own devices, Saudi Arabia and Iran will continue to fight, as neither has reached a point of exhaustion and no outside power, including the United Nations, has been moved enough by the human disaster, which is devouring a whole country, to act. The world is still looking on with pathetic silence.

The Trump administration, which views Iran as the greatest threat to the region’s stability and has concerns over its nuclear ambitions, is probably the only power broker that can end this conflict. The human catastrophe being inflicted on Yemen may well provide the US the opportunity to change the dynamic of multiple conflicts in the region by taking a new initiative that can achieve four significant objectives:

First, it will bring to an end the calamitous war in Yemen and save the lives of millions of Yemenites, many of whom will otherwise perish if the war continues for another two or three years. The Saudis, whose reputation has been badly tainted by the gruesome murder of Khashoggi, been severely criticized by the international community, and knowing that they cannot win this war, will have little choice but to embrace the US’ initiative. Moreover, the Saudis are heavily dependent both politically and militarily on the US, which they cannot forsake at any price.

Second, Iran is fully aware of the fact that the Trump administration, regardless of the Khashoggi episode, will not abandon Saudi Arabia as long as the kingdom continues to cooperate. Iran too is not oblivious to the fact that it cannot win this costly war, and its prospect to obtain a permanent foothold in the Arabian Peninsula is very slim. It may well opt to cut its losses, especially if it believes that its cooperation may well help lift US sanctions in conjunction with a revised nuclear deal with the US.

Third, regardless of Iran’s public refusal to renegotiate the Iran deal, the US sanctions are becoming increasingly painful and the public is showing growing frustration in the way their government is addressing their economic hardship. Those in the Trump administration who are entertaining the illusion that the public outcry resulting from crippling sanctions could precipitate a regime change in Iran should also disabuse themselves of this wishful thinking. The Iranian government is there to stay, as it continues to enjoy the full support of the military and is more than capable of dealing with any public unrest by whatever ruthless means necessary.

Fourth, ending the war in Yemen and mending relations with Iran will have major positive implications on the entire region. The prospect of an Israeli-Palestinian peace will dramatically improve, as the Saudis will continue to bring Israel ever close to the Arab states; it will dramatically change the nature of the Iran-Israel conflict should a modified nuclear deal be struck between the US and Tehran; and it could also accelerate the ending of the civil war in Syria.

Some may think that what I am suggesting here amounts to nothing but a pipedream. I beg to differ. Iran and Saudi Arabia are permanent fixtures in the Middle East and must sooner or later learn to share a region that has not been dominated by either country. Sunnis and Shiites have coexisted for millennia, and have no choice but to continue to coexist.

Neither Iran nor Saudi Arabia can become the region’s hegemon. They can fight in proxy wars in Syria and Yemen for a hundred years, but in the end neither can gain the upper hand—not now and perhaps not ever.

It is time for Muslims to stop killing each other. The lesson from Yemen should leave an indelible mark on the psyche of every Saudi and Iranian that the way out of their morass in Yemen is reconciliation and peaceful coexistence. Trump, who can turn on a dime, may well be in a unique position to make it happen.

Dr. Alon Ben-Meir is a professor of international relations at the Center for Global Affairs at NYU. He teaches courses on international negotiation and
Middle Eastern studies.