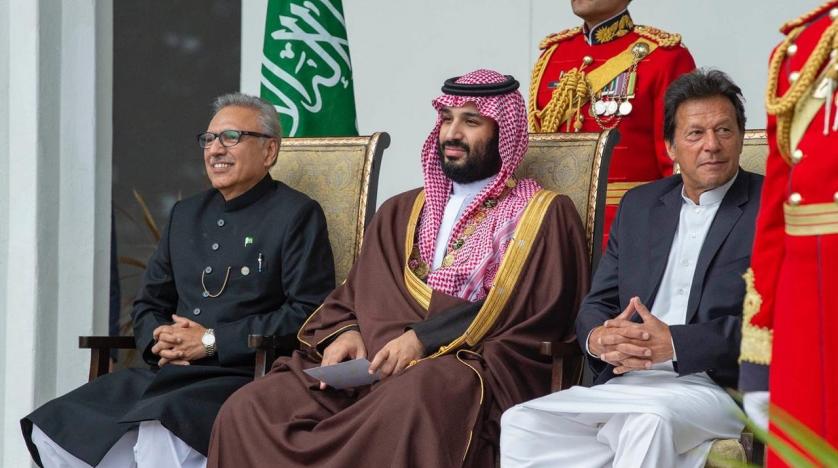 Pakistan is currently facing great financial instability. The country’s current financial crisis has given its administration several sleepless nights over the course of the past few months and has pushed them to knock on the doors of several powerful countries and international monetary organizations, seeking assistance and rescue from their impending financial doom. As all options had seemingly been exhausted, it appeared that Pakistan was on the brink of an economic collapse, until the announcement of a historic state visit by the Saudi Crown Prince Muhammad Bin Salman to Pakistan and the talks and brokerage of a monumental investment deal between the two countries valued at billions of dollars. This deal, which seems to have breathed a new life into Pakistan’s economy and has catapulted it out of the economic abyss, seems to have come with a combination of its own merits and drawbacks that impact the country’s future relations with its allies Iran and China. Despite its absolute necessity and utmost importance in terms of Pakistan’s economic well-being and financial survival, what this deal entails for Pakistan’s diplomatic future and individual relationships with China, Iran and Saudi Arabia in particular must be taken into account and analyzed to ascertain whether this trip was a net positive for Pakistan or a net negative for the financially vulnerable, nuclear-armed state.

The Saudi Crown Prince Muhammad Bin Salman chose Pakistan as his first international state visit since being declared crown prince in 2017. He was present in Islamabad, the capital city of Pakistan, from the 16th to the 17th February 2019 , to sign a Pak-Saudi investment deal worth billions of dollars. This historic visit has been deemed to be the prime catalyst behind the brokerage of the most lucrative investment deal signed between Pakistan and Saudi Arabia. Its significance is underscored by the  current precipice of a massive economic crisis Pakistan finds itself in, as according to the State Bank of Pakistan, Pakistan is currently in the midst of a severe balance of payments crisis and has a deficit of -18 billion dollars. Pakistan’s foreign reserves are down to only 8 billion dollars, which are expected to last it only 2 months and are not enough to cover its yearlong debt payments.

Since early October 2018, the Pakistani Prime Minister Imran Khan had been in constant talks with the International Monetary Fund (IMF) in an attempt to negotiate some form of emergency financial assistance that would help bailout Pakistan from its current balance of payments crisis. It should be noted that the IMF had previously bailed Pakistan out of similar situations around 13 times since the 1980s, the last time having been within the past five years.

After months of back and forth between the IMF and the Pakistani Finance Ministry,  Asad Umar, the incumbent Finance Minister of Pakistan, held a press conference on January 13th 2019 in which he explicitly stated that Pakistan would no longer seek help from the IMF for a bailout plea and would instead focus its energies on alternative sources. It was apparent that this time the IMF had put its foot down and somewhat refused to rescue Pakistan from yet another financial crisis as it had entered a repetitive cycle which self-perpetuated this narrative. Speculation arose that Pakistan would leverage its strong friendly ties with international allies such as the UAE, China and Saudi Arabia to help alleviate the burden caused by the financial crisis, which had led to a four time devaluation of the Pakistani rupee and increased prices for locals.

As mentioned above, given Pakistan’s strong financial and diplomatic ties with the Chinese government in Beijing, it was widely believed that China would be at the forefront of Pakistan’s rescue; not only due to its good will towards Pakistan and its diplomatic relation but also because China has several financial interests situated in Pakistan. As illustrated by the CPEC arrangement, with the infrastructure of Gwadar deep sea port being developed by the influx of over 60 billion dollars from the Chinese treasury. Apart from the financial aspect of it, China and Pakistan have generally enjoyed decades of warm and friendly vibes and have become extremely important allies of each other in the South Asian ring. Thus, one assumed that China would be more than willing to bail Pakistan out. However, in an unexpected turn of events, China contributed only 2.5 billion dollars to help alleviate the financial stress faced by Pakistan, which was considered an underwhelming response to Pakistan’s financial crisis. It has been stated by a high ranking Chinese government that China does not want to become an IMF substitute for the Pakistani government and assist them every time financially by bailing them out of every economic crisis.

These developments culminated in Pakistan brokering a deal with Saudi Arabia and the subsequent MBS visit to Islamabad to finalize the deal the two countries have agreed upon. The provisions of the deal are such that Pakistan will receive a financial bailout package from Saudi Arabia worth 12 billion dollars which will essentially help relieve the balance of payments crisis looming over Pakistan currently. The fact that Saudi Arabia is willing to rescue Pakistan in this time of urgent need has far-reaching consequences not only on Pakistan’s relationship with Saudi Arabia but also on the former’s relationship, good-will and standing with its allies Iran and China, albeit for quite different reasons.

China and Pakistan have been involved in Gwadar for over a decade now, and China has invested close to 60 billion USD in developing the Gwadar deep sea port given its strategic location in the Indian Ocean, which provides a prosperous port for Chinese trade. China and Pakistan have signed several deals and contracts which had further strengthened their cooperation on Gwadar and helped flourish the diplomatic ties between the two neighboring countries. It is being said that the Pakistani government is treating the crown prince MBS’s trip as “the biggest state visit since Chinese President Xi Jinping in 2015“. The Chinese President had visited Pakistan following the signing of an investment deal between Pakistan and China in which China pledged to invest billions of dollars in the development of Pakistani infrastructure relevant to China’s global Belt and Road initiative. Given that the deal between Pakistan and Saudi Arabia entails increased Saudi presence in Gwadar , it now means that KSA will have a share of the pie that was previously solely enjoyed by China. Previously, China had a stronghold and monopoly of sorts over Gwadar deep seaport and it proved to be quite lucrative for the Chinese which had encouraged them to invest billions into the deal and so, the abrupt penetration by the Saudis might possibility upset the Beijing administration and put a slight stress on Pak-Chinese ties. However, one should not assume that this development will have any major drastic effects on the existence of the Pak-China deal as China has already invested billions of dollars into the Gwadar sea port and it seems unlikely that China will risk souring its relations with Pakistan over increased Saudi involvement in Gwadar as China still needs Pakistan’s support in maintaining its trading stronghold via Gwadar as part of its Belt and Road initiative.

Given the current economic climate in Pakistan, Pakistan sees no way out of the looming financial crisis without accepting the generous offer made by the Saudis. Pakistan has gone out of its way to give a grand welcome to the Saudi crown prince MBS who became the first state guest to reside in the official residence of the Prime Minister when he stayed at the Prime Minister Imran Khan’s residence during his visit to Pakistan from the 16th to the 17th of February 2019. The federal government spent over 3 million USD on preparations for the arrival of MBS despite most costs being borne by the Saudi government themselves. Pakistan made sure to exhaust all symbolic methods of appreciation, including declaring the first day of the royal visit a national holiday and further awarding MBS with the Nishan-e-Pakistan, Pakistan’s highest civil award. It seems to be the first time that Saudi administration took steps to deepen their relationship with Pakistan from a personal one of camaraderie between two states to one involving heavily weighted financial investments.

As far as Iran is concerned, one must remember that Iran and Saudi Arabia share a long standing regional rivalry, with both countries attempting to be hegemonic in the Middle East. The sectarian nature of the conflict between Saudi Arabia and Iran has penetrated itself into the political sphere with Pakistan holding a neutral yet slightly Saudi inclined stance. Thus, the Saudi financial assistance to Pakistan and its penetration into Pakistan’s economy through the establishment of the oil refinery in Gwadar might pose a threat to Pakistan’s alliance and diplomatic relationship with Iran as Pakistan might be seen as getting too close to Saudi Arabia for Iran’s comfort.  Increased Saudi penetration in Pakistan, coupled with the recent terrorist attack of February 16th that killed 27 members of the  Iranian Revolutionary Guard in Isfahan, at the Iranian-Pakistan border, seems to have done more damage for Pakistan’s relationship with Iran. The head of Iran’s powerful Revolutionary Guard, Maj. Gen. Mohammad Ali Jafari, accused Pakistan’s security forces of supporting the militants and said Iran expects it to “punish” them. Therefore, Pakistan is currently in a delicate and vulnerable space with regards to its diplomatic and strategic relations with Iran and it must do something concrete to reinforce the confidence between the two Islamic nuclear states as the relations seem to be weakening.

Thus, the state visit of the Saudi Crown Prince to Pakistan breathed a new life into the country’s economic future, helping strengthen the ties between Pakistan and Saudi Arabia, whilst giving Pakistan the assistance it desperately needed. However, it did not come without its shortfalls and drawbacks as it seems to have put a stress, although of varying degrees, on Pakistan’s relationship with its neighbors Iran and China. The impact of this Saudi visit on the Pakistan’s foreign standing with the two neighbors is yet to be determined, but it is certain that this historic state visit was not without its merits and shortcomings.

Muhammad Shahzeb Akhtar is U3 student currently pursuing a degree in Political Science and Economics with a focus on International Relations and International Economy and Trade. He specializes in the politics of the Middle East, South Asia and North America.