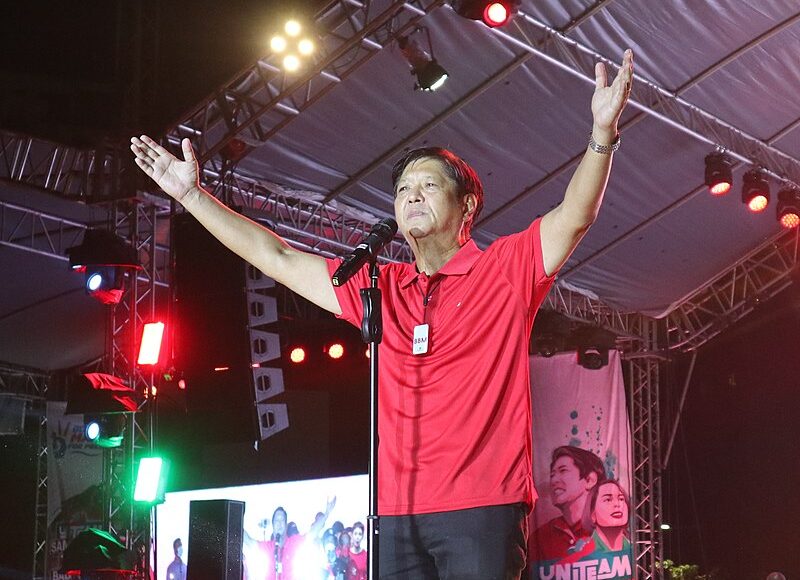 On May 9, 2022, Ferdinand “Bongbong” Marcos Jr. was declared the Philippines’ president-elect after receiving over 31 million votes; he will assume office on June 30. Marcos Jr. comes from the influential Marcos family, and his father, Ferdinand Marcos, was a dictator that embezzled the Philippines’ wealth before being ousted during the People Power Revolution in 1986. The younger Marcos ran on a message of Filipino “unity,” promising economic stimulation and infrastructure investment after COVID-19 decimated the Philippines’ economy. But his opponents feared Marcos Jr. would continue his father’s history of “repression, cronyism, and kleptocracy.” Despite having ten candidates, the leading presidential contenders were Marcos Jr. and Leni Robredo, the country’s incumbent vice president.

Robredo beat Marcos Jr. for the vice presidency in 2016 and was runner-up in the recent election. She is a human rights activist who promised to make the Philippine government more transparent. As the vice president, Robredo led campaigns to tackle poverty in the Philippines. She had also criticized President Rodrigo Duterte for his aggressive War on Drugs, which she asserted put more emphasis on killing offenders than rehabilitation, aligning with his alleged support of politically motivated extrajudicial killings. This begs the question: how did Robredo, who attempted to be a bastion against corruption and poverty, lose to a dictator’s son who wants to continue his father’s legacy?

Questions about electoral integrity in the Philippines have recurred since 2007, and this election was no different. One example is when over 1,000 voting machines broke down on election day. Leni Robredo shared suspicions during the voting and said, “We do not want the integrity of the elections to be compromised […] We hope that the authorities can show that they are on top of the situation.” Regardless of the vote-counting machines (VCMs), it is unlikely that fraudulent means of winning votes had a significant effect on the election’s outcome.

The Asian Network For Free Elections (ANFREL) notes that while VCM failure only affected 1.76 per cent of voting precincts. The Commissions on Elections (Comelec) of the Philippines have dismissed any potential cheating occurrences during the election, with several prominent universities concluding the same result. Nonetheless, this did not dissuade Kontra Daya, an election watchdog, from asserting that there was fraud. The organization believes a lack of transparency and expert oversight combined with the Comelec’s nonchalant attitude is a telltale sign of election fraud. However, even if corruption existed, it likely did not play a vital role in deciding the election. Marcos won handily with a lead of 14 million votes. The technical difficulties that plagued 1.76 per cent of voting precincts do not explain how the younger Marcos won 58 per cent of the total vote.

Rodrigo Duterte has claimed that the presidency was no job for a woman in response to speculation that his daughter would succeed him. He believes that women’s emotional differences compared to men would make them unfit for the position. This is one of many roadblocks women face in the Philippine government, where sexism has been normalized for many years, as evidenced by Duterte’s comments throughout his tenure. As of now, women comprise 28 and 29 per cent of the Philippines’ House of Representatives and Senate, respectively, which is far from gender parity. Because of this, Robredo was forced to appeal to gender stereotypes to garner enough of a voter base. The persona Robredo adopted during the campaign is that of a “mother” to Filipinos, a stark contrast to the “stern, fatherly” persona of Rodrigo Duterte. To reinforce these gender roles, Robredo even chose pink as her campaign colour to symbolize femininity and resistance against toxic masculinity and authoritarianism. These metaphors may have helped galvanize Robredo’s supporters. Nevertheless, selling the idea of femininity too much can be a double-edged sword.

In the Philippines, leadership is still perceived in masculine terms. This means that appearing too feminine is detrimental to a campaign. Both Robredo and Duterte-Caprio had to consider this during their respective political races and strike a balance between femininity and masculinity. This careful navigation is a concept unknown to male candidates who do not have to overcome gender stereotypes. Thus, Marcos Jr. already had a significant advantage in the presidential race by not having these roadblocks.

In the Philippines, political dynasties and name associations still hold power in government. Although political researcher Daniel Bruno Davis agrees that Filipinos are less likely to vote for corrupt politicians, electors are apathetic when holding other politicians from large political families to the same standard. Davis writes that instead of voting based on platforms, most electors vote for candidates they recognize, which is one of the reasons why Marcos Jr. was able to win. He has successfully spun a new narrative about his family by creating a sustained disinformation campaign. VERA Files, a fact-checking outlet, reports that out of all the presidential candidates, Marcos Jr. benefitted the most from the disinformation.

Such misinformation asserts that the Marcos Sr. years were the Philippines’ economic “golden years,” claiming that the country was the richest in Asia under him. Other false posts sought to paint the Marcos’ wealth as riches honestly earned, even though Marcos Sr.’s embezzlement has been largely documented. This pro-Marcos disinformation had years to develop and repaint the senior Marcos’ dictatorship. Fatima Gaw, a communications professor at the University of the Philippines, stated this campaign “is really priming the audience to rationalize [the Marcos] lies and distortions,” as those exposed to the narrative poised by this campaign are more likely to accept Marcos Jr.’s claims of being the real victim. Although 90 per cent of Filipinos can now reach the internet, that does not mean the news they receive is accurate. Oftentimes, voters are misled into voting against their own interests based on erroneous information. This enabled Marcos to avoid reckoning with the damage caused by his father.

What does this imply?

None of these factors alone signalled a landslide victory for Marcos Jr. in the presidential election. Combined, however, these factors provided a path for Marcos to win 16 million more votes than Robredo. It is important for Filipinos to deeply consider the direction of their country if both Rodrigo Duterte, who had a 65 per cent approval rate near the end of his term, and now Marcos Jr. were able to become president. It is clear that issues within Filipino elections remain. With Marcos in power, it is unlikely these concerns will be resolved in the next six years. Still, striving for societal and electoral change is an endeavour every Filipino should fight for if they desire a democracy that would truly represent their best interests.

Russel Ismael is a U2 Mechanical Engineering student. His areas of interest are Asia-Pacific governments, and how their policies affect international and domestic relations.