The Shadow Financial World: Forces Beneath the Shade 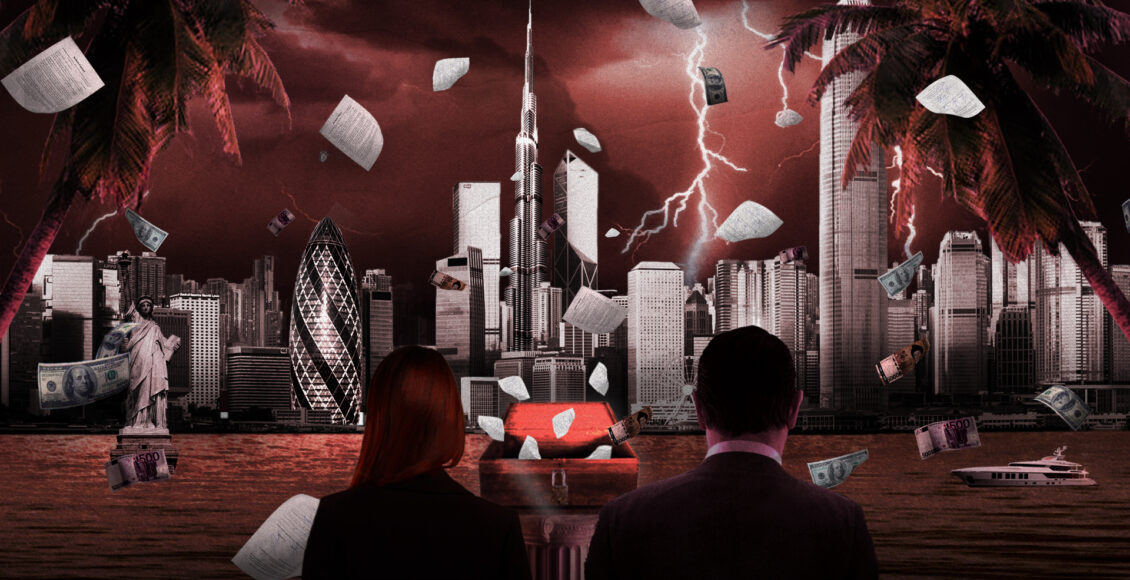 In the classic myth of “Pandora’s box,” a curious Pandora opens a forbidden gift from Zeus, releasing disease, disaster, and ruin into the world. Derived from this myth, the idiom ‘opening Pandora’s box’ is used today whenever the source of many unforeseen troubles is revealed. On October 3, 2021, the Pandora Papers did just that — laying bare a system of corruption, deception, and inequality.

Dubbed the largest offshore data leak in history, the release of the Pandora Papers took the world by storm. A colossal 2.94 terabytes of data was disseminated via myriad news sources, collectively revealing how the elite use secret offshore companies to hide their wealth, avoid paying taxes, and sometimes launder money. This data was obtained in one of the largest global investigations conducted by the International Consortium of Investigative Journalists (ICIJ). Over 600 partner journalists from 150 different media outlets went through the records of 14 offshore service providers, discovering damning information on over 330 politicians from around the world. The corruption seeped to top levels of government, with 35 country leaders being implicated in the leak.

Offshore tax havens are countries or jurisdictions which allow outsiders to set up businesses easily and pay minimal corporate taxes. Generally, these are small, stable republics with limited domestic economies that use foreign investment as a tool for growth. Tax havens entice customers by offering lucrative incentives and secrecy for companies. In addition, non-citizens benefit from reduced tax rates and robust legal practices, preventing foreign authorities from getting data about their clients. Through a policy of low transparency, governments negotiate custom taxes with specific companies. Tax havens don’t require a local company presence to do business. Instead, customers establish shell companies that operate and exist strictly on paper, allowing them to exploit loopholes in the system.

While avoiding taxes by using offshore accounts is illegal, establishing an offshore bank account is not. Therefore, individuals only face punitive measures when the secrecy afforded by offshore companies provides cover for illicit money flows that enable criminal activity, like money laundering or terrorism financing. However, the majority of individuals exposed by the Pandora Papers have danced close to the fine line of legality without actually crossing it.

As the Pandora Papers established links of offshore activity to more than twice as many politicians and public officials as did the Panama Papers, it is evident that few people have learned a lesson from the previous leak. Despite some resignations, new legislation, and increased awareness about the offshore financial system, there have still been very few convictions five years later. Over 200,000 offshore entities were exposed, but only a handful of people have seen jail time. In the United States, four people implicated in the Panama Papers have been charged, and only two of them were sentenced. According to Gerard Ryle, the director of ICIJ, when they published the Panama Papers a few years ago, “there was a lot of outcry around the world saying that this was a system that needed to end.” However, there’s a crucial lack of incentive to end the secrecy offshore, as “the very people who could end the system … are themselves benefiting from it.”

In essence, wealthy individuals enjoy improved secrecy because the financial services industry helps affluent clients obscure their assets and minimize their taxes. Financial enablers make up the wealth defence industry, a coalition of professionals, including advisers, bankers, lawyers, accountants, notaries, and estate agents. They “develop and market strategies, structures and schemes to avoid tax liabilities and regulatory scrutiny.” The mechanisms for shielding their clients’ wealth include anonymous shell companies, family offices, offshore accounts, and trusts. Enablers are largely responsible for helping the richest people in the world get richer. Though they may not be as wealthy as their clients, enablers are still “paid millions to hide trillions.”

Even though these methods are considered legal, the reflexive instinct to hold onto every penny you have should be seen as immoral. Citizens must contribute a portion of their share to the needs of their communities. The wealthiest members have an even greater obligation, not just because they possess the means but because they have benefitted from the community’s resources, which helped them amass their private wealth.

The use of tax havens further perpetuates income inequality and widens the wealth gap. According to the ICIJ, an estimated $5.6 trillion to $32 trillion is hidden offshore. Tax havens cost governments worldwide up to $600 billion in lost taxes each year, as calculated by the International Monetary Fund. The ability of wealthy individuals to evade taxes directly impacts ordinary citizens, especially in terms of their access to quality education, healthcare, and homes. Thus, the financial burden of taxes falls on the rest of society, while those who have the means opt out. Likewise, the stashing of wealth in tax havens disproportionately harms developing nations, as their treasuries become starved of funds to pay for necessary roads, schools, and hospitals.

Though politicians should lead by example, many take advantage of their privilege to exploit the offshore banking system. Leaders have easy access to financial enablers, who buy offshore companies for them under a fake name that cannot be traced back to the source. Once a company is obtained, individuals can open a bank account in the offshore firm’s name and use it to purchase yachts, private planes, and lavish properties. As the records reveal, former British prime minister Tony Blair, the current prime ministers of the Czech Republic and Kenya, and the king of Jordan, among several others, have all benefited from the anonymity or tax advantages of their offshore holdings. Kenyatta and Blair reveal the hypocrisy inherent to this venture, as they ​had both campaigned on an anti-corruption platform urging transparency in politics.

Going forward, a strong global response is required to hold wealthy individuals accountable for their shady dealings. While the complex nature of offshore tax havens makes their activity almost impossible to keep track of, increased international pressure is forcing tax havens to have less secrecy. In the United States, a bipartisan group of lawmakers is cracking down on financial enablers, requiring the “Treasury Department to impose stronger due diligence laws by the end of 2023” cracking down on middlemen, like the “attorneys who help create limited liability companies for clients who abuse the law.”

The ​Organization for Economic Cooperation and Development (OECD) is also trying to take action against offshore finance. In June, the G7 reached a landmark deal to back a minimum global corporate tax rate of at least 15 per cent. A month later, 130 countries, including tax havens like Bermuda, the Cayman Islands and the British Virgin Islands, backed the decision. The deal is designed to reduce the incentives of multinational companies to shift profits to low-tax jurisdictions. According to the OECD, “a global minimum corporate tax of 15 per cent could yield around $150 billion in additional global tax revenues annually.” While this overwhelming uptake provides some hope, formalizing an agreement may prove challenging, as more countries must be on board with the tax for it to be formally passed. For countries like Ireland and China, which have built their economies off these corporate tax avoidance schemes, it seems unlikely that they will relinquish their economic advantage.

In the meantime, the ICIJ continues to “follow the money,” uncovering those behind the world’s shadiest businesses. Tracking money remains a vital first step in holding the global elite accountable. Still, it is undeniable that there must be more consequences for those who abuse their power and wealth. To establish a sense of equity and justice in society, we have to do more than just follow the money.

Featured image: “Pandora-Papers-Banner-City-V8” by “Prachatai” is licensed under CC BY-NC-ND 2.0.