The Silent War: How the U.S. Media Failed Yemen 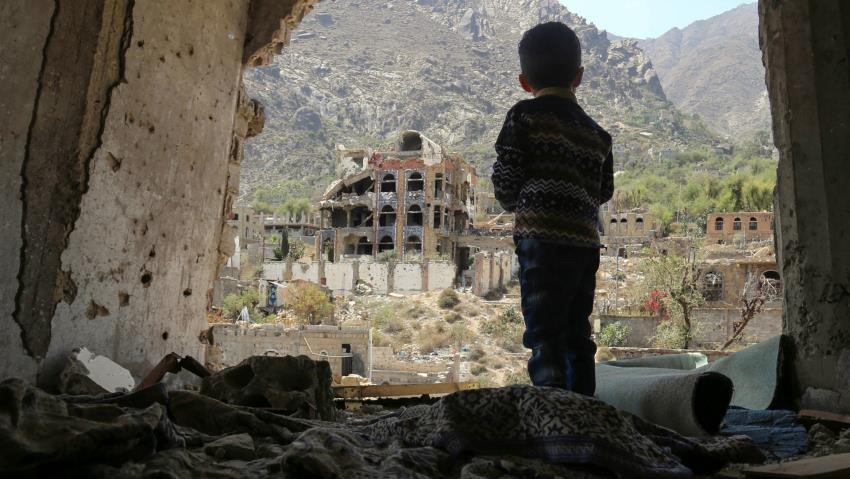 A young child in the southwestern city of Taiz, Yemen, looking out at the destruction of a home district caused by a Saudi led coalition airstrike, resulting in 15 civilian deaths. Child Gazing at Rubble by Felton Davis is licensed under CC BY 2.0.
Share

For the past four years, the country of Yemen has been experiencing what is possibly the worst humanitarian crisis ever. Since war broke out in 2015, approximately 100,000 people have been killed and many more seriously injured. 8.4 million are food insecure, and 400,000 children are malnourished. Many citizens, including one million people suffering from cholera, are dying of preventable causes. 56% of the Yemeni population is without access to basic healthcare resources, there has been a blockade of food and medicine entering the country, and two million civilians are internally displaced. The UN estimates that the total number of individuals in Yemen who are in need of dire humanitarian assistance is a staggering 24 million.

Despite these pervasive horrors in Yemen, Western media has remained relatively silent on the matter. According to one media watchdog, mainstream American media has aired a cumulative 92 minutes of coverage since the onset of the conflict. This is shockingly low given the scale of the atrocities in the country.

If a massive humanitarian crisis fails to make the news, what do U.S. news outlets deem newsworthy? According to the Tyndall Report, the most covered newscast stories in 2018 were the Justice Kavanagh hearing (426 minutes), alleged Russian election meddling (332 minutes), and wildfires in California (242 minutes). From July 2017 to July 2018, a period during which MSNBC did not cover Yemen at all, there were 455 stories involving Stormy Daniels.

While Yemen is largely ignored, other international conflicts, such as the one in Syria, do get extensive coverage. This is odd given that the conflicts in Syria and Yemen have many similarities. Both crises stemmed from the uprisings of the Arab Spring. These uprisings soon crumbled into proxy wars, in which powerful states backed opposing factions. Both states host millions of internally displaced citizens and even more in need of humanitarian assistance. However, according to Tyndall report data, there have been 666 minutes of coverage in Syria since 2015, more than seven times that of Yemen. Why? The answer comes down to narratives.

To Americans, Syria’s story is easy. ISIS has always been the clear antagonist who has engaged in multiple attacks on American citizens and performed barbaric public beheadings. Then there’s Assad who violated international law by engaging in gas attacks on his own citizens. Both of these players make it easy to read an incredibly complex international conflict as a simple battle of good versus evil. It also morally justifies American involvement in Syria.

The narrative of Yemen is harder to spin for an American audience. The Yemen conflict is complicated, yet it offers no comfortable antagonist for Americans to easily despise without implicating themselves. It is also harder for America to justify their involvement there. While the United States backs the Saudi Coalition in Yemen, it is difficult to understand why. Saudi has vast military power, it is responsible for high civilian death tolls, and it has committed a sizeable list of war crimes in the conflict. The Houthi rebels, on the other hand, unlike ISIS in Syria, have not killed a single American citizen. Even though the Houthis have engaged in multiple human rights abuses, it is still hard explain away the U.S.-armed, Saudi bombings of hospitals, public services, and civilians.

It is difficult for the media to spin American made bombs being used to murder children. Fundamentally, the corporate media does not wish to offend its patriotic American viewers by unpacking the United States’ longstanding, distasteful relationship with a country like Saudi Arabia. It would rather ignore the Yemen situation altogether.

It would be wrong to say that the U.S. media never alerts the public of or oppose violations of international law by Saudi Arabia. When journalist Jamal Khashoggi was assassinated by the Saudi government for critiquing the crown prince Mohammad bin Salman, there was a mass media outrage. The Tyndall report clocked this story at 116 minutes of coverage. But this leads us to question why the murder of one journalist takes precedence over the massive body count in Yemen.

Edward Herman and Noam Chomsky, in their seminal work Manufacturing Consent, discuss the media’s tendency to distinguish between “worthy and unworthy victims:” If victims suit a particular political narrative, they will receive media attention whereas victims abused by the media’s own government or its allies are generally neglected.  Khashoggi was a ‘worthy’ victim: although Saudi Arabia is an ally of the United States, Khashoggi was a member of the American media circle, which meant this death was personal. If the media was truly serious about outlining Saudi crimes, it would have also called out the Saudi government for a massive civilian death toll in Yemen. However, the Yemeni deaths fail to serve any enticing political narrative. Yemen is poor and not a very valuable piece on the geopolitical chessboard. It has not even added much to the international refugee crisis.

Another obstacle to media coverage of Yemen is political. While the longstanding collaboration between Fox News and the Republican Party may explain the network’s reluctance to highlight the current administration’s foreign policy failings, other networks are equally silent due to the lucrative U.S. fixation on the absurdity of Donald Trump. Since the 2016 election, the media has been economically incentivized to provide negative coverage of Donald Trump. Networks and individuals who have purposely shifted focus to analyse the actions of the president have seen a huge spike in ratings. This is how MSNBC overtook Fox News for the first time in 17 years as the number one news outlet in America and has become the main-stream voice of resistance to the current administration.

Unfortunately, this media shift has been detrimental to Yemen. Because MSNBC is building its reputation and its bottom line by resisting the Trump presidency, it complicates what they cover. They cannot use Saudi support in Yemen as a political dig against Trump, despite his allowance of further escalation of Saudi abuses and his veto of the bipartisan bill, without implicating the Obama Administration who initiated U.S. involvement in the coalition in 2015. Criticizing Trump over Yemen would suggest MSNBC is not being objective. It would be highly hypocritical to criticize the sitting president for escalating a policy that began under the previous one.

MSNBC similarly opted not the cover Yemen’s cholera outbreak for the entirety of 2017. Instead, it offered extensive coverage, 36 distinct articles, on one of Trump’s air raids in the Yemen town of Yakla. This raid ended in the death of a U.S. Navy Seal, an eight-year-old American girl, and 14 Yemeni non-combatants. This tragic story was spun as a misstep of President Trump, a failure of a commander and chief. That same year, according to the United Nations High Commission for Refugees, there were 5,676 airstrikes in Yemen in the first six months alone. All of these went unmentioned in mainstream media. Only after the death of two American citizens did airstrikes become newsworthy.

The U.S. media has spent most of its energy covering domestic political intrigue: potential corruption, unseemly members of government, and, of course, impeachment. These are important stories.  However, the tragedy of the people of Yemen has, in the meantime, fallen to the wayside in favour of these sensational pieces.

The lack of fully nuanced mainstream coverage of Yemen leaves us with many questions on where the media’s true priorities rest: are the largest media companies in America actually keeping the most powerful government in the world in check? Do they seek out and respond to global injustices for their own sake, or must they wait for some direct effect on American citizens? What does it say about the state of media when the morally outrageous ceases to be newsworthy?