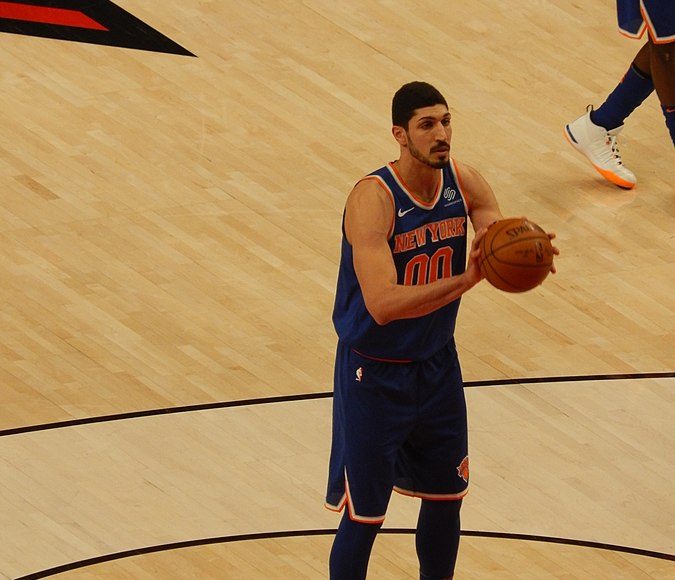 In today’s National Basketball Association, plenty of stars have overcome unthinkable odds to achieve basketball greatness.  Giannis Antetokounmpo of the Milwaukee Bucks, the frontrunner for this year’s Most Valuable Player race, comes to mind; before he was an NBA superstar, the 24-year-old Antetokounmpo sold cheap goods on the streets of Athens, Greece to help his Nigerian immigrant family make ends meet.  Former two-time All-Star Caron Butler discovered basketball at the age of 15 while in prison for selling drugs, and his talents earned him a scholarship to the University of Connecticut, which led him to play for 14 remarkable seasons in the pros.  One particularly remarkable beat-the-odds story is NBA champion Paul Pierce, who played in all 82 games of the 2000-2001 NBA season after being stabbed 11 times at a nightclub one month prior to the regular season.

For his part, center Enes Kanter of the Portland Trail Blazers has faced – and continues to face – a unique set of challenges while establishing himself in the NBA.  Kanter is a Swiss national, having spent his early years in Switzerland, though he and his parents are Turkish.  He played for a Turkish youth basketball team as a teenager and became a minor basketball star for the famous Fenerbahce team but turned down paid professional contracts in Europe to vie for a bigger career in the United States.  For Kanter, this was a risky move, especially since college basketball players in the U.S. do not receive compensation aside from their basketball scholarship.  He impressed scouts at the Nike Hoops Summit in 2010 and agreed to a contract with the University of Kentucky, one of the best college basketball teams in the country, for the 2010-2011 school year.

Yet, Kanter would never play for Kentucky.  The National Collegiate Athletic Association (NCAA) barred the 18-year-old Kanter from playing college basketball because he was already a professional in their eyes, having received $33,000 from his days in Europe.  The NCAA has earned a poor reputation for not paying their athletes, who bring in hundreds of millions of dollars for the organization and attract tens of thousands of people to college stadiums each year. Kylia Carter, the mother of Wendell Carter, a star from Duke University who was drafted in 2018, likened the system to slavery: “It feels like it was built this way intentionally.”  Still, Kentucky coach John Calipari helped Kanter prepare for the NBA draft, and the Kentucky campus rallied behind Kanter, starting a “Free Enes” movement.  Kanter was drafted third overall by the Utah Jazz the following year.  Throughout his NBA career, Kanter has played for the Utah Jazz, Oklahoma City Thunder, New York Knicks, and Portland Trail Blazers.

The Turkish center also balances his love of basketball with his faith.  A practicing Muslim, Kanter has prayed five times a day since the age of eight and fasts at least once a week during the NBA season to remain holy.  Praying daily is in accordance with Salat, a key pillar of Islam, of which there are five.  Kanter’s occasional fasting throughout the year prepares him for the holy month of Ramadan, during which Muslims must fast from dawn to sunset every day for a month to comply with another pillar of Islam.  To observe this fully, Kanter can only eat during Iftar, the post-sunset meal, or immediately before dawn, for Suhoor.

Kanter’s faith has presented an incredible challenge this year in particular.  Kanter’s Portland Trail Blazers made a deep playoff run, making it to the Western Conference Finals before being eliminated by the Golden State Warriors, and given an injury to their starting center Jusuf Nurkic, Kanter was forced into the starting role.  Since Ramadan relies on the lunar calendar, it begins slightly earlier every year, and in 2019, it occurs during the NBA playoffs.  Kanter eats no food and drinks no water before the games to observe Ramadan. Moreover, he uses no medication that could otherwise heal his injured left shoulder.  Ramadan calls for complete abstinence from all substances in the body, so Kanter relied only on a sling to support his injury.

Kanter has talked openly about the struggles of observing Ramadan in the 2019 playoffs, and he recently wrote an opinion piece for the Washington Post describing his faith.  “My faith in Islam is not unlike my faith in the game of basketball: Both require immense determination, focus, passion and discipline…I try to give all I have to my faith each day, and all I have to my game and my team each night.”

Kanter has also become outspoken against Turkish President Recep Tayyip Erdoğan, who has taken an authoritarian hold of Turkey since a failed coup attempt in 2016.  Kanter is on record calling Erdoğan “the Hitler of our century” and he follows Fethullah Gulen, a Turkish cleric who lives in refuge in Pennsylvania.  Kanter meets with Gulen every few weeks for guidance, and for that, his passport has been cancelled by Turkey and he fears for his life should he ever leave the U.S. again.  In January, Kanter skipped a game scheduled for London for fear that Turkey would send an assassin to kill him, saying dismally that: “It would be a very ugly situation” if Erdoğan tracked him down outside the U.S.  Kanter has received credible death threats throughout his career as well; for his own protection, he sleeps with an FBI-issued panic button that he can use to alert them, should someone attempt to threaten his life.

The Turkish government has taken steps to censor Kanter and his family, who still live in Turkey today.  In August 2016, his father released a statement calling out Enes for his blasphemous remarks against Erdoğan, which Enes says he understands since his father could be thrown into jail otherwise.  In the Washington Post piece, he calls attention to Turkish political prisoners: “Today, thousands of prisoners of conscience who are also observant Muslims are observing Ramadan from behind the bars of jails in Turkey. I would like to continue to use my platform to advocate on behalf of people in Turkey who can’t speak out, including at the Human Rights Foundation’s Oslo Freedom Forum.”  In 2018, his father was indicted and sentenced to prison for 15 years for alleged connections to Gulen.  For Enes, imprisoning his father is Erdoğan’s attempt to punish Enes for his harsh statements against the government.

NBA fans will also be excited to learn that Kanter has spoken a number of times with former Houston Rockets player Hakeem Olajuwon, a Muslim player who won the MVP award while fasting during the playoffs in the 1994-1995 NBA season.  Kanter and Olajuwon discussed what it’s like to be Muslim in the NBA and how to focus during Ramadan.  In an interview with ESPN’s Doris Burke, Kanter recounted his conversations with Olajuwon: “Inspire others.  I think that was the most important advice that he gave me.”

The Blazers center has certainly taken that advice.  He has set a strong example for young basketball players, faithful Muslims, and the anti-authoritarian movement in Turkey.  Kanter’s journey has certainly not been easy, and his statelessness remains an open question, but he will have a temporary home in the U.S. as long as his NBA stardom continues.

The featured image by Frenchieinportland is licensed under CC BY-SA 4.0.