The Unbreakable Marriage of Force and American Foreign Policy 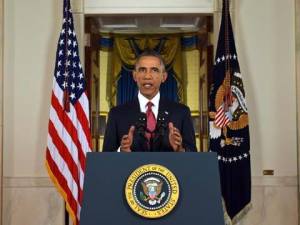 In an interview on the Daily Show on September 23rd about the Obama administration’s campaign against Islamic State (IS), former Commander in Chief of the United States Central Command (CENTCOM) Anthony Zinni explained why his

country was facing yet another extended military campaign in the Middle East. The General likened the United States to a “one-punch country” that resorted too often to military hard power over diplomatic and economic soft power.

Recent experiences in Iraq and Afghanistan have demonstrated the limitations of military intervention in achieving political objectives. Despite this experience, the administration has decided to follow essentially the same strategy by relying on airstrikes in Iraq and Syria to weaken IS. As McGill Professor and specialist in Middle East politics Rex Brynen has noted, it is unclear how exactly military force will solve a fundamentally political problem.

Why has the Obama administration resorted to a military solution to combat IS? As much as the Obama administration embodied a promise to change the course of American foreign policy, and pivot the country away from war, the country has yet to move past the confines of the War on Terror. The administration’s ideology continues to be shaped by an antiterrorism logic that emphasizes the use of force. Public opinion largely mirrors the rationale behind militarized strategy. Due to that logic, force is deployed even when the costs are unknown and results are far from guaranteed.

The administration’s doctrine of “Don’t Do Stupid Shit” has added to the confusion about the campaign against IS. Though this label is commonly used and understood within the administration, publicly it provides neither rhetorical nor ideological clarity. Less than a month ago, the President stated, “we don’t have a strategy yet” in response to IS. Moreover, the current campaign to fight IS remains without a title, despite weeks of airstrikes. Part of the confusion is due to the reactive nature of the administration’s response to IS. Fighting IS has become a priority only within the past few months, before then it seems the administration had overlooked the scope of the problem despite warnings from the intelligence community.

The Obama doctrine is based closely on the recent history of the War on Terror, and the corresponding changes in American public opinion. Long gone are the days of strong public support for foreign invasion, and extended missions in Iraq and Afghanistan for the cause of antiterrorism. The Pew Research Center has found in a survey spanning from 1974 to 2014, that public perceptions of the United States as a global power are currently at a four-decade low. Following the trauma of the Iraq war and the potential failure of the Afghan state, the American public is disillusioned with all-out interventionism, and mindful of the dangers of overreach in foreign policy.

However, despite hesitation regarding the exact role the United States should play internationally, the public still supports limited military action. The same PEW opinion survey found that 54% of respondents approved of airstrikes against IS, and only 31% disapproved. Though the American public is aware of the shortcomings of policy based on force, few alternatives seem viable. Action must be taken, lest the United States look weak to the world and its own citizens. This form of thinking was evident in another PEW study released in August that showed 54% of respondents thought the President was “not tough enough” on foreign policy and national security.

Obama’s recent decision to expand the fight against IS has stretched his policy into unfamiliar terrain. Since assuming office, Obama has sought to strike a balance between the dangers of overreach in foreign crises and ignoring volatile security situations. He has opted to manage crises closely, selectively authorizing limited military options, most often airstrikes, when volatile situations seem on the brink of collapse. The administration took a strong role in the NATO campaign in March 2011 against Gaddafi’s regime in Libya as government forces approached Benghazi. In a speech defending his decision, Obama cited the threat of mass killings. In much the same manner, Obama authorized strikes to stop IS as it encircled Mount Sinjar on August 14th, citing an impending genocide against Yazidis who had taken refuge there. However, recent public outcry against the beheadings of American journalists Steven Sotloff and Jim Foley, alongside the rapid territorial gains of IS, has challenged the administration’s closely calculated approach. Islamic State quickly grew to be a force that was unmanageable through isolated airstrikes, requiring a larger and more aggressive campaign to fully address the problem.

As much as the President has sought to define himself in opposition to the Bush-era policy, Obama still operates within the legacies of the War on Terror that he once cautioned against. Ironically, the authority to launch airstrikes without explicit authorization from Congress is based on Bush legalization. The 2001 Authorization for the Use of Military Force was signed into law in 2001, on the heels of 9/11[i]. The AUMF gives the President the authority to “use all necessary and appropriate action (…) in order to prevent any future acts of international terrorism against the United States.” Although IS has yet to demonstrate the ability to carry out acts of terrorism outside Iraq and Syria, the AUMF is broad enough to constitute the group as a threat.

While the election of President Obama has meant that the means of the War on Terror have changed, the overarching goals are more or less the same. The dominant priority of United States is still rooting out international terrorism through force. Obama explained in his September 10th speech: “I have made it clear that we will hunt down terrorists who threaten our country, wherever they are.” In that respect, Obama has come to represent at best only a downgrade of the intensity of the War on Terror.

The Obama doctrine rests somewhere between the initial fervor with which the United States embarked on the War on Terror, and the current dismay of international power dynamics. Though the Obama administration has adopted a more constrained policy in fighting that war, the nation still finds itself throwing the one punch it has. It remains to be seen whether or not the administration picked the right fight this time around.