The WTO’s Fall from Grace: Disputes About Dispute Settlement 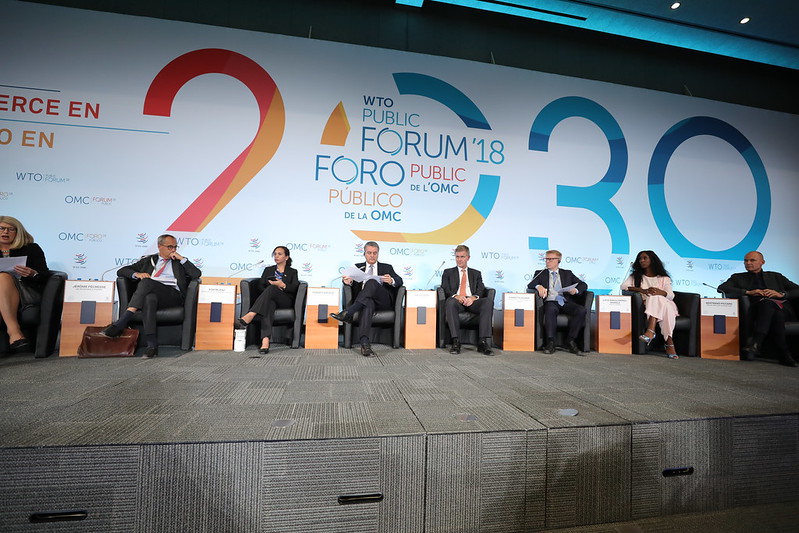 Outgoing DG of the WTO Roberto Azevêdo at the 2018 Public Forum.
Share

This is the second instalment of a two-part series on the WTO by this author. The first piece, “Wavering Leadership,” can be found here.

The future of the World Trade Organization (WTO) has come under recent scrutiny, with its Director General (DG), Roberto Azevêdo, announcing plans to resign one year early. Yet the demise of the WTO has been a long-standing issue, particularly linked to the lack of support shown for the organization by one of the world’s largest economies, the United States. Azevêdo’s decision to depart on August 31, 2020 has been explained as strategic, and the new question is how states will overcome current trade disagreements to select a new DG.

Until recently, the US, a key founder and partner at the WTO, was supportive of the institution. However, under Donald Trump’s administration, the United States made the decision to block the appointment of arbitrators to the WTO appellate body. By December 2019, this decision put a halt to the organization’s ability to hear appeals due to a lack of panelists. Since then, only two cases were brought to the WTO for review — a stark contrast to the 10 complaints heard between January and May 2019.

Everyone is focused on trade war — but meanwhile the US is in the process of killing the WTO dispute settlement mechanism by blocking the appointment of new judges. A big deal — better dispute resolution is the main positive thing the WTO has achieved 2/ https://t.co/QZukQUmhSu

The DSM is the hallmark of the WTO system, allowing state parties to bring complaints against members found to be in breach of rules before a centralized arbitration body. Nonetheless, just six years after its creation, WTO members agreed that its rules needed clarification. No agreement has been made since, regardless, states have continued to use the imperfect process. While the current rules may be outdated with regard to the digital economy, there is no reason why cooperation cannot continue. For one, rules related to health and sanitation may not need updating, and cooperation in these areas is considered vital to many transnational businesses. Additionally, the WTO is needed to resolve disputes in more contentious issue areas such as geographical indicators, where even unsatisfactory rules are preferable to no rules at all, provided states wish to create a more stable trading environment.

The Dispute Settlement Mechanism: The Biggest Dispute of Them All

The DSM can be seen as a type of court: it decides on cases based on the rules WTO members have agreed upon, sometimes settling before cases make it to ‘trial.’ In fact, the DSM is “second to none as a respected forum for the resolution of international frictions,” according to former US Trade Representative (USTR) Michael Froman. Post-trial, however, the WTO system is nothing like national justice systems. If the complainant state is found aggrieved, it may be allowed to put in place trade-related countermeasures to try and force the defending party into compliance.

Another key aspect that sets the WTO apart from national legal systems is the concept of precedence: part of the common law tradition, precedence means that previous court decisions guide the ruling and sentencing of future decisions. In contrast, per the Vienna Convention on the Law of Treaties, precedence does not exist in international law, implying that cases must be decided solely on their own merits and relevant rules without previous decisions being taken into account. The absence of precedent-setting in international law is driven by the fact that international law is agreed upon by sovereign states. Given that international arbitrators and judges do not act as representatives of states, they do not have the power to make new law when deciding cases.

Therein lies the crux of American opposition to the WTO appellate body: the office of the US Trade Representative claims that the dispute settlement mechanism treats precedent as binding law. While the United States is against the development of precedent, the European Union, on the other hand, has sought to create more court-like procedures in “second generation” trade agreements, such as CETA. Furthermore, research has shown that states will strategically pursue cases that appear trivial in order to later cite the legal interpretation in more important rulings, adding evidence to the claim that there is, in fact, binding precedent in the DSM.

Proponents, Opponents, and Everything in Between

Speaking on the escalation of the US-China trade dispute in 2018, former USTR Michael Froman noted that Trump’s outright hostility toward the WTO was different than previous administrations, but the underlying concerns remain the same. Under the Obama administration, the US pursued two main issues, among a list of 12 provided by the WTO, for reform: greater transparency and public access to dispute settlement proceedings, as well as a more detailed procedure for third parties to submit documents to panels.

In December 2018, Trump’s new USTR appointee, Robert Lightizer, stated at the dispute settlement body meeting that the appellate body of the DSM was acting as though binding precedent existed. As a result, the US has blocked new appointments to the appellate body in an attempt to force the international community either to fix the problem, or to be left without the best dispute settlement tool the states have. However, this strongman approach has not been fruitful: knowing this decision would entail a shortage of judges by December 2019, Canada and the European Union signed an agreement in July 2019 to set up their own appellate body for as long as the WTO is paralyzed. Since then, 17 more countries have agreed to sign on. Canada is one of America’s closest trading partners, and the EU is the second largest economy in the world; hence, their willingness to defy the stance of a longtime ally serves as a stark reminder to the US that their leadership hinges on creating a predictable, liberal trading environment that will foster business. If the US cannot provide one, states will turn elsewhere.

Selecting the Next DG: Will the Biggest Dispute be the DSM?

The fact of the matter is that while trade has winners and losers, the benefits of trade are greater than the costs. In 2017, Phil Hogan, the EU Agricultural Commissioner at the time, said as much when he reminded states at the Buenos Aires Conference that trade “is a positive-sum game when everyone plays their part.”  Unlike the US under Donald Trump, the EU is trying to support a stable trading environment that will foster development. The tragedy is that the US, the key backer of the GATT-WTO, has more to gain from cooperation with like-minded allies as China’s power increases than if they dismantle the system.

Recently, reports that the WTO may soon be restructured have circulated, indicating unrest among member states. Meanwhile, despite a low level of complaints, trade restrictions have increased almost exponentially since COVID-19 hit. Most of these restrictions fall under the Sanitary and Phyto-Sanitary (SPS) or the Technical Barriers to Trade (TBT) agreements. SPS and TBT are agreements on non-tariff barriers relating to health and safety, and typically include rules around certification and testing.These types of rules are particularly important for businesses as member non-compliance creates additional red tape for companies seeking out new markets.

Part of the COVID-19 economic recovery will involve international trade, however, a regulatory landscape with new barriers due to the virus will be difficult for states and companies to navigate. The WTO will be needed more than ever to ensure the inevitable disputes are resolved without escalating trade tensions that would further hurt crippled economies. The WTO’s recovery will require support from member states, as well as a strong DG. The  nomination period for the new DG will run from June 8 to July 8, but the position must be approved unanimously by all 164 member states. If Donald Trump’s stance on the DSM is any indication of how his administration will approach the DG selection process, it is unclear if it will be possible to find an acceptable candidate for all members by the end of August.