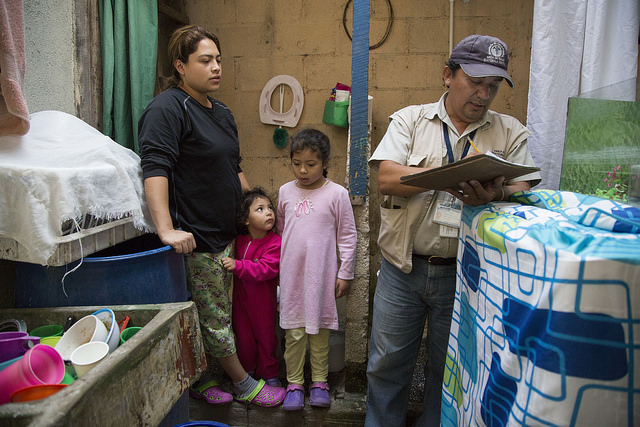 Women’s rights issues are central to the Zika virus and microcephaly crisis spreading across Latin America. As the number of babies born with microcephaly rises dramatically in the regions affected by Zika, the negative personal and societal consequences of women’s lack of control over their own bodies is exemplified. In response to this crisis, governments are calling on women to postpone pregnancy. The unfortunate irony and hypocrisy of this government action is that in these same countries abortion is illegal and contraceptives are hard to access.

In El Slavador, where abortion is illegal with no exceptions and the availability of contraceptives is particularly low, women have been advised to wait two years before getting pregnant [1]. It’s hypocritical and irresponsible for governments to request women not get pregnant when they give them no- or very poor- access to ways of preventing pregnancy and make no requests of men for a similar change of behavior.

Especially in regions where sexual violence is extremely prevalent, it is unrealistic to believe that telling women not to get pregnant is an appropriate and sufficient response to this crisis. As the UN High Commissioner for Human Rights, Zeid Ra’ad Al Hussein, points out, “[m]any of the key issues revolve around men’s failure to uphold the rights of women and girls, and a range of strong measures need to be taken to tackle these underlying problems” [3]. The reality that is being ignored by the governments is that “many women and girls simply cannot exercise control over whether or when or under what circumstances they become pregnant,” [4] and this is a reality that needs to be changed.

The UN declared abortion to be a human right and has stressed the urgency of respecting this right as the only effective way to respond to the crisis. “Upholding human rights is essential to an effective public health response and this requires that governments ensure women, men and adolescents have access to comprehensive and affordable quality sexual and reproductive health services and information, without discrimination,” said Zeid. He noted that these services include emergency contraception, maternal healthcare and safe abortion services to the full extent of the law [4]. It is essential that women’s reproductive rights are respected and acted upon in order to end the tragic outbreak of microcephaly cases in Latin America today, and also to ensure the dignity and autonomy of women and in turn improve the quality of life for entire communities. Women empowerement is at the forefront of development and this is highlighted by the Zika public health crisis.

Despite the push from the greater international community for loosening the restrictive laws on abortion, local state officials as well as church authorities are not budging. In these heavily Catholic regions, where the religious community is influential in civil society, Catholic leaders have reasserted their opposition to abortion and contraceptives since the outbreak of the Zika virus [5]. In Brazil, one of the worst affected countries, the Catholic Church said “it strongly opposed a move to permit abortions for pregnant women exposed to the Zika virus” (guradian2). This poses a serious challenge to the realization of women’s rights and to the prevention of extensive cases of microcephaly in these areas.

The Vatican also recently announced its opposition to abortion in the cases of women with Zika. “Not only is increased access to abortion and abortifacients [abortion-inducing drugs] an illegitimate response to this crisis, but since it terminates the life of a child it is fundamentally not preventative,” the Vatican said [6]. However, Pope Francis’s comments on Thursday might have raised some hope in local public health officials. In response to a question of whether abortion or contraceptives could be considered the lesser of two evils in the case of women at risk of Zika, the Pope asserted that abortion is “a crime” and “an absolute evil,” [7] but suggested that using contraception to avoid pregnancy is permissible for those at risk of Zika [8]. His comments are promising to hear, but will there be follow through? Will this prompt Catholic approval of contraception in other issues of public health?

The Zika crisis is not only a health and women’s rights issue but also an issue of economic and rural-urban inequality. The impacts of the Zika virus disproportionately affect poor women. In rural areas, where mosquitoes tend to congregate, Zika is most prevalent [9] but reproductive health services are especially limited. In Columbia, for example, abortion services are mostly limited to cities [10] and in Brazil, where contraception is delivered by public hospitals, the areas where most of the country’s poverty is concentrated have fewer doctors than the more affluent areas [11]. As a result of this lack of resources and services, many women resort to illegal and unsafe abortions.

The response efforts to this crisis need to engage civil society by providing health and reproductive services and important information on the Zika virus and its health consequences to the people at risk, especially in rural areas where this is lacking the most. Additionally, the current laws that restrict access to reproductive health services such as abortion go against international standards and deny women “their rights to determine whether and when they become pregnant” [12]. The Zika virus and microcephaly crisis is bringing issues of inequality and of women’s rights to light, and hopefully will bring about a change in the laws and policies that are behind them.