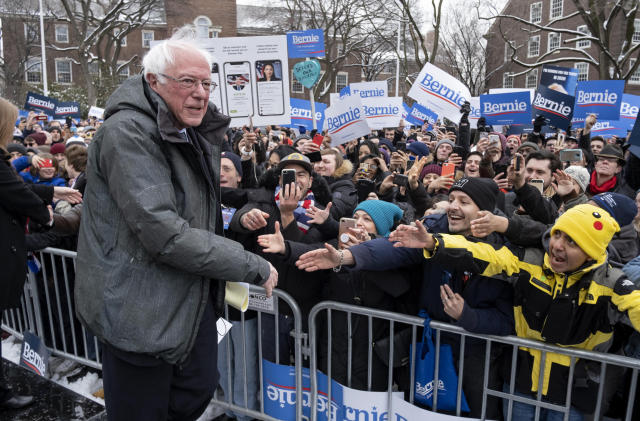 Sen. Bernie Sanders, I-Vt., greets supporters as he arrives to kick off his political campaign Saturday, March 2, 2019, in the Brooklyn borough of New York as he makes a bid for President of the United States in 2020, his second campaign for the office. (AP Photo/Craig Ruttle)
Share

The upcoming presidential election may be the most important in American history. While the incumbent Republican president is fairly unpopular, the Democratic primary is heavily fractured, and the party is unsure if they will be able to win in the general. A firebrand populist has seized the lead, but those with concerns over his health fear he is too left wing to win in the general election. All the while, the spectre of a contested convention, a situation where no candidate gets a majority of delegates and must persuade party insiders to support their nomination, looms over the race.

Though this may sound like an apt summary of the current status of the 2020 Democratic presidential primaries, it is also a description of the 1932 Democratic Primaries, wherein the charismatic populist was Franklin Delano Roosevelt (FDR). Then, similar to now, the United States was in a period of turmoil, with many perceiving the system to be broken. Populism was on the rise, and Americans were turning to socialism, nationalism, and even fascism in response to their disenchantment with the establishment. Perhaps the only major difference between now and then is the lack of a recession during our time, yet even that could change.

In the tumultuous year of 2020, Presidential candidate and self-described democratic socialist Bernie Sanders seems willing to repeat history. Sanders’ democratic socialist policies have been described by both supporters and critics as unprecedented in US history. Yet his platform is very much based on the precedents set by  Roosevelt and former progressive movements. Sanders constantly cites the former President as an inspiration, declaring that “we must take up the unfinished business of the New Deal and carry it to completion.” Furthermore, the new swath of populist progressive movements within the US has similarly been influenced by the progressive movements of the 1930s and 1960s. American politics have been notoriously hostile towards social democracy since the Reaganism of the 1980s, and, even ten years ago, very few would have expected Sanders’ rise. To understand the source of this new wave of populist progressivism in the US, one must compare and contrast it to similar movements of the past.

A major parallel between former and current leftist populist movements in the US is the important role played by the economy. In the 1930s, The Great Depression forced the collapse of the US economy. Millions lost their savings, and at one point up to a quarter of the country was unemployed. Many poor workers were radicalised and lurched towards the left in an attempt to overcome their overwhelming poverty.

In an interview with MIR, Betty Smith, a retired legal secretary and political activist who grew up just after the Great Depression, recalls the effect of the poor economy in the 1930s on her second husband’s father. He opted to organize with other farmers, ultimately joining  the Communist Party and “becoming red.” Throughout this period, organised labor grew in strength, with millions of workers opting to join unions; many would go on to vote for Roosevelt and support his New Deal. 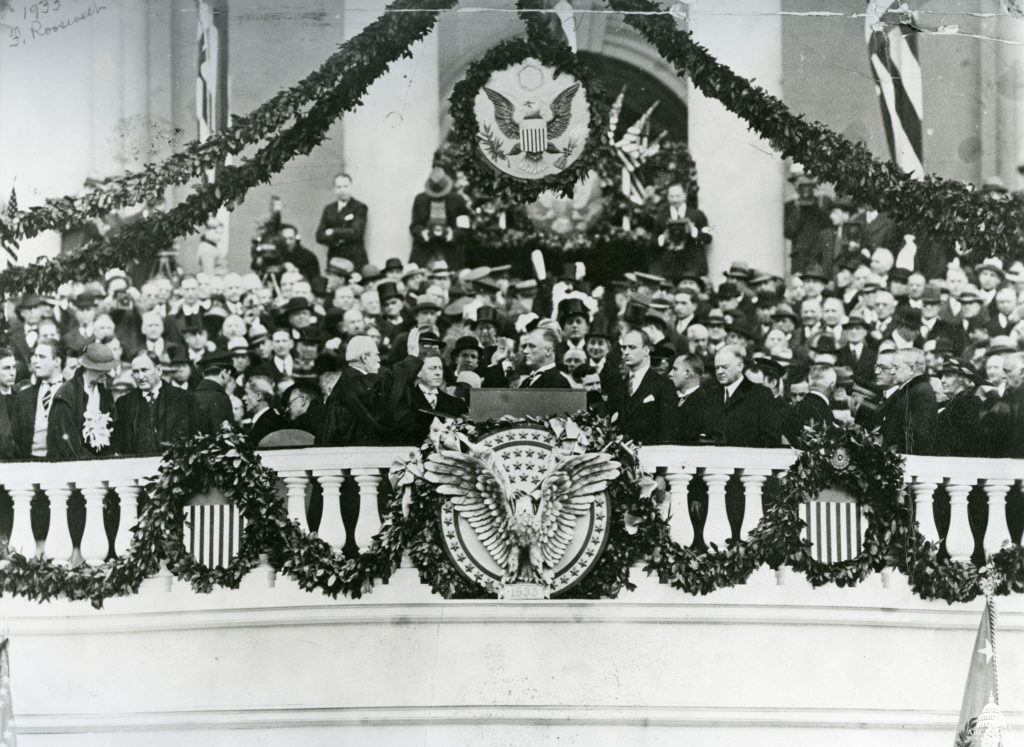 Franklin D. Roosevelt’s First Inauguration in 1933. Photo was uploaded by USCapitol and is licensed under US Government Works.

In a similar vein, the Great Recession of 2008/2009 saw around nine million Americans lose their homes and jobs. Since then wages have stagnated, and income inequality has continued to grow. Despite stock market highs, and low unemployment, 49% of Americans report being worried about paying their next bill. 70% of adult Americans feel that the economy is rigged against them, and 43% of American adults express positive feelings about socialism. Even though the economy is not in a recession, it is clear that there are major economic anxieties among Americans and it is this economic insecurity that has likely helped to fuel the leftist populism seen today. Many younger voters skeptical of capitalism voted in favour of Sanders in the recent New Hampshire primary. Concerns over high rent and student debt have seen the membership of Democratic Socialists of America balloon while the belief in the need for a more active government has increased. Similar to the 1930s, economic insecurities are propelling the growth of leftist populism.

Another major common factor between current and former populist progressive movements is the role played by younger Americans. The 1930s saw the rise of the American Youth Congress which advocated for “impoverished young Americans.” In my interview with Betty, she stated that the 1960s witnessed “ a resurgence of young people… wanting to change society in a very revolutionary way.” She pointed out how important youth involvement was in movements such as Students for a Democratic Society as well as the anti-war and civil rights movement. 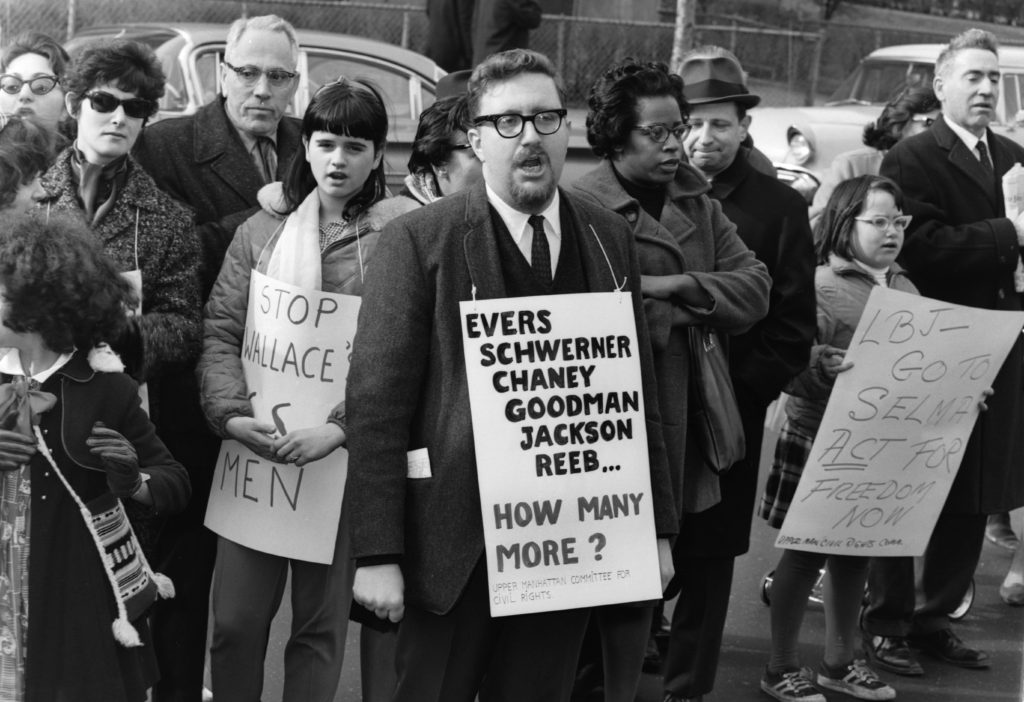 A Civil Rights Demonstration in 1965. Photo was uploaded by Winston Vargas and is licensed under CC BY-NC 2.0

In the present day,  substantial student debt, a difficult job market, and climate change are driving young Americans to the streets, contributing to the resurgence of leftist populism in America. Yet what distinguishes the modern variety from its predecessor is its electoral angle. Huge amounts of young people, especially women, are running for office on a leftist platform, which is how figures like Alexandria Ocasio-Cortez and Ilhan Omar have come onto the national stage. This greatly contrasts previous iterations of progressive movements—rather than just protesting, many leftists are actively legislating. They are working to change the system from within, as can be seen with Ocasio-Cortez’s proposal for a Green New Deal. Thus, modern leftist populism does not just plan on protesting—it intends to govern.

The final notable characteristic current leftist populism shares with its predecessors is its dedication to anti-fascism. Betty spoke of how her left-leaning first husband, as well as her uncle, both went to fight for the communists against the fascists in the Spanish Civil War of 1936. She said that for leftists then “the premier [aspect] was anti-fascism. Once the [great] depression was resolved, there was the Spanish Civil War… and the whole focus of everyone on the left was anti-fascism.” The portrayal of leftism and socialism as tools in the fight against fascism helped these movements gain popularity during World War II.

Now, Donald Trump’s right-wing populism has arguably bolstered the leftist populist movement even more than Bernie Sanders. It was after Trump’s election that leftist populist organisations such as Democratic Socialists of America saw their numbers swell. His election precipitated the inception of several organizations such as Indivisible and the environmentally-focused Sunrise Movement. These movements focus on grassroots action to spread awareness about climate change and resist the Trump administration, while also engaging in policymaking for when Democrats return to power. Finally, it was Trump’s election that appeared to affirm what Bernie Sanders had been arguing for decades—Americans were frustrated with the status quo and felt that unequal trade deals, private interests, and corruption were endemic to the system. Thus, a large portion of Americans chose to throw a wrench into the system by electing Trump. 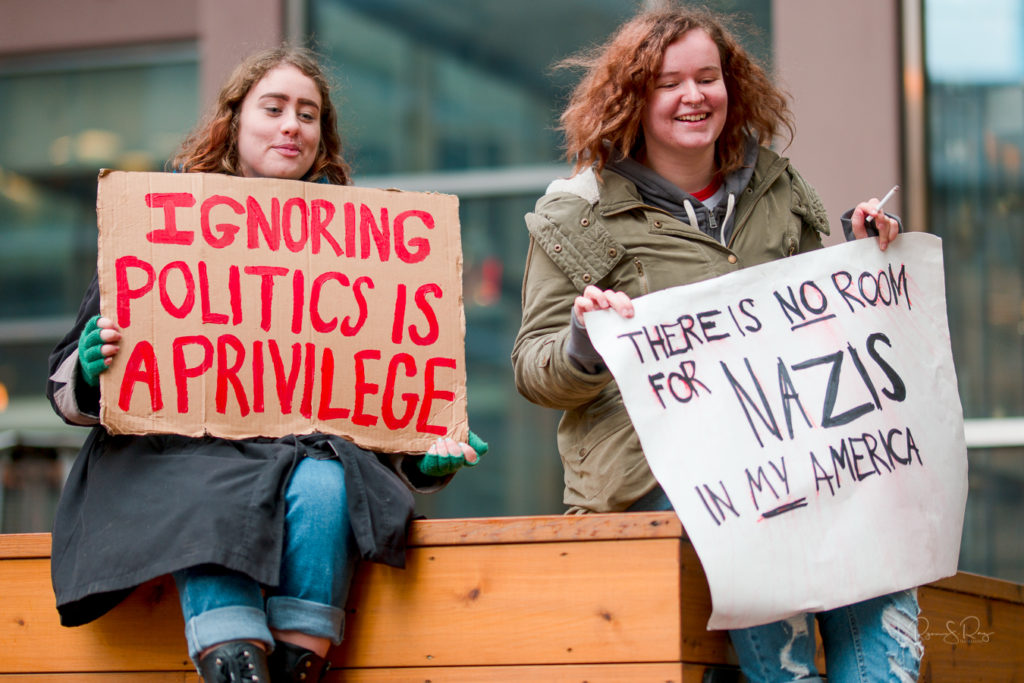 Anti-Trump Protests in November of 2016.  Photo by Ryan and is licensed under CC BY-NC-ND 2.0

Yet, Trump’s politics are focused on stoking the racial anxieties of white Americans—his economic policies have done little to address the panoply of economic concerns many Americans have. As such, Sanders and other leftists have constructed their cause as an antidote to Trump’s nationalist phony populism. They intend to focus on economic issues plaguing working families and, in Sanders’s own words, “expose Trump for the fraud he is.” Thus, modern leftist populism bears yet another resemblance to movements of the 1930s in how its platform challenges the status quo by reacting against far-right politics.

In my interview with Betty, she stated that current day Progressive Populism is becoming increasingly similar to the progressive populism of the 1930s. “A lot of people live in very bad circumstances. Maybe not the same level as many years back, but could be a lot better… the emotional quest is similar. They’re both [FDR and Bernie] looking for [people to have] the right to enjoy the fruits of the tremendous wealth in this country.” Economic anxieties, frustrated young Americans, and Trump’s far-right administration are fueling a progressive populism that may become a powerful force for change in the upcoming 2020 Presidential Election. History has shown that at inflection points these progressive movements have sparked great change in American politics. Bernie Sanders and progressive populism may very well be able to do so once again.

To protect the privacy of individuals interviewed for this article, different names were used.