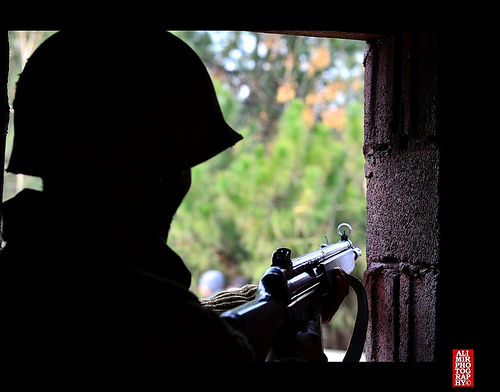 Pakistani-Afghan relations are a “complex and complicated nexus”[1] that have produced seemingly self-defeating Pakistani policies. Why has Pakistan chosen to support the Afghan Taliban, and why has it continued to do so despite the risk of perpetuating its own instability? In light of the complexity of events in Afghanistan and the rivalry between Pakistan and India, Pakistan’s support for the Taliban follows a distinct logic. Historical rivalries and animosities provide an effective rationale for Pakistani support of the Taliban. Championed by a security apparatus seeking to combat Indian influence in Afghanistan, these Taliban ties have become a critical tool in Pakistani foreign policy, which is dominated by Pakistan’s obsession with its own security, and its attempts to balance against India.

In a similar manner to the cooperation between India and Afghanistan, which based on their mutual hatred of Pakistan, the Taliban and Pakistan joined together in their hostility towards India.[4] Pakistan has been closely aligned with the Taliban since its birth in 1980, providing it with financial, political, and logistical support.[5] Pakistan’s support for the Taliban is part of a larger longstanding proxy war with India in Afghanistan. During the Afghan civil war in the 1990s, Pakistan provided military assistance to the Taliban while India supported the Northern Alliance. Similarly, since the 2001 US invasion of Afghanistan, India has supported the Karzai government while Pakistan has continued to support the Taliban.[6] Therefore, Afghanistan’s instability has provided Pakistan with an opportunity to check India’s influence and to install a friendly Afghan government.

These developments have created a unique set of implicit norms, which have rendered the support of proxies the most effective policy choice. Recently, these norms have been pushed out into the open. For example, American forces recently caught Afghan intelligence officials colluding with the Pakistani Taliban. One Afghan official defended the move, explaining, “Everyone has an angle (…) That’s the way we think. Some people said we needed our own.”[7] The official’s defence demonstrates how the enduring rivalry has created an atmosphere of strategic competition that justifies the use of proxies as a security policy. Since Pakistan, Afghanistan, and India have all supported proxy groups at one point, Pakistan’s support for the Taliban is certainly not unprecedented. However, it is undeniable that Pakistan has been the most consistent supporter of proxies in Afghanistan.

The United States invasion of Afghanistan in 2001 further strengthened the rationale for continued Pakistani sponsorship of the Taliban. Pakistan’s renewed support for the Taliban was the product of two tandem dramatic shifts in the Afghan politics after the invasion that seriously worried Pakistan. First, the invasion removed Pakistan’s strongest ally in Afghanistan, the Taliban regime, from power. Unwilling to see one of its only allies in Afghanistan disappear completely, Pakistan continued to support the Taliban as it retreated. Second, the new American-backed government led by Hamid Karzai once again became an ally of India, “thus fulfilling the Pakistanis’ worst fear.”[8] Thus the American invasion increased India’s influence while severely diminishing Pakistan’s. The dramatic shift in the power balance in Afghanistan renewed Pakistan’s sense of insecurity and pushed it to fall back to its policy of supporting the Taliban.

The Pakistani government reacted incoherently to the American invasion, pursing contradictory security policies. Theoretically, Pakistan is a partner in the American counterterrorism mission. In practice, Pakistan has continued to ally itself with the Afghan Taliban. These contradictory policies emerged out of the fragmented Pakistani political system that “allows contradictory policies to coexist in parallel, even on national security issues.”[9] The lack of a unified policymaking apparatus has thus allowed Pakistan’s support of insurgent groups to continue despite its nominal allegiance to the US. Moreover, the Pakistani military “effectively controls Pakistan’s foreign policy (…)”[10], and has been able to pursue its support of the Taliban unchecked by other elements within the Pakistani government.

Links between the Pakistani government and the Taliban have primarily been maintained through the Inter Service Intelligence Agency (ISI). American officials have grown so frustrated with these links, that they have publicly accused ISI for its role in 2009 bombing outside the Indian embassy in Afghanistan.[11] In this way, Pakistani support for the Taliban is a limited policy supported and maintained primarily by a single institution in the larger government. ISI’s leadership and enthusiasm concerning Taliban support helps to explain how such a policy has continued despite the American presence in Afghanistan.

With the American withdrawal looming, Pakistan has hedged it bets concerning the resurgence of the Taliban. Pakistan is preparing for the withdrawal as an opportunity to reestablish its influence in Afghanistan. Afghan officials have frequently accused Pakistan of derailing the peace process between the Karzai government and the Taliban. Afghan Deputy Foreign minister Ershad Ahmadi argued that Pakistan has a “grand design” in which it seeks to establish “little fiefdoms around the country in which the Taliban – its most important strategic asset in Afghanistan – play an influential role”[12] Ahmadi’s accusations are hyperbolic, but point to basic truths about Pakistani objectives. Pakistan views the withdrawal as an opportunity to improve its own security by strengthening its ally, the Taliban.

While Pakistan may not have a “grand design”, considering the disunity between its civilian government and security institutions, it certainly seeks to exert maximum influence over the withdrawal process. Pakistan seeks to use the Taliban as a tool to advance its own interests in Afghanistan. Accordingly, it has pressured Taliban officials, arresting some in order to “control the Taliban’s political agenda.”[13] Hence, Pakistan’s support of the Taliban is not an end itself, and must be considered in terms of a broader agenda of Pakistani influence in Afghanistan.

Much of that agenda concerns Pakistan’s traditional enemy, India. Pakistan’s interests in Afghanistan are in many ways “India-centric”[14], in which “protecting Pakistan against Indian encroachment takes precedence over pursuing Pakistan’s broader geopolitical and economic goals.”[15] On one hand, Pakistan’s India paranoia has driven its questionable support of the Taliban. On the other, both countries have approached Afghanistan as a “zero-sum dynamic in which one side’s gain is a loss for the other.”[16]

Such a dynamic creates an atmosphere of competition in which both sides seek any possible edge over the other. However, this competition is asymmetrical because India is far more economically strong and stable relative to Pakistan. Hence, Pakistan has been forced to adopt a strategy of asymmetrical deterrence in Afghanistan that relies heavily on the support of proxies. While India has sought greater economic and political ties to Afghanistan, Pakistan has sought solely security-based objectives.

Pakistan dreads being “squeezed in and Indian nutcracker”[17], and has done everything in its power to eject India from Afghanistan. Pakistani officials believe that India is using its consulates in Afghanistan as “launching pads for covert attacks on Pakistan.”[18] Security officials view even an Indian diplomatic presence in Afghanistan as an offensive against Pakistan. Anti-Indian paranoia has completely tainted Pakistan’s policies in Afghanistan, leaving no room for an alternative and more nuanced approach. Accordingly, For Pakistan, the ideal situation in Afghanistan is one that is “largely under its influence and has little contact with India.”[19] The Pakistan-Taliban alliance is a key means by which to achieve Pakistan’s idealized vision of Afghanistan.

With so much at stake for Pakistan, and so few means, the Pakistan-Taliban alliance is all the more important. South Asia expert Stephen Cohen explains “Given this strategic compulsion its not surprising that Pakistan tolerates, if it does not directly support, the Taliban: its has no other instrument available to it than this Pashtun tribal hammer.”[20] According to Cohen, Pakistan’s support of the Taliban is not so much a choice as it is a necessity for Pakistan. His characterization of the policy as a “hammer” demonstrates the bluntness of such a policy. In this way, Pakistan’s funding of the Taliban is driven solely by Pakistan’s India fears. Historian William Dalympire explains that this policy is “not to spite the US or Karzai, but entirely and obsessively to avoid being surrounded by India.”[21] Pakistan’s obsession with Indian encirclement supports unconventional and risky policy towards Afghanistan.

Pakistan’s India fears have propelled security-centric foreign policy and overridden more cautious approaches in Afghanistan. Pakistan’s nuclear umbrella has allowed it to pursue such aggressive policy without facing more direct repercussions from India.[22] Accordingly, the use of proxies has become “a key element of Pakistan’s efforts to balance against India.”[23] Pakistan has help to orchestrate attacks Indian presence in Afghanistan, with multiple attacks aimed at the Indian embassy carried out by Pakistani-affiliated insurgent groups.[24] Another attack on Indian guesthouses in Kabul targeted Indian military trainers in 2010.[25] Both attacks clearly followed Pakistan’s anti-Indian agenda.

Pakistan’s support of the Taliban is strongly rooted in historical, regional, and institutional realities. An endemic insecurity dynamic operates on all three of these levels. Pakistan’s sense of insecurity has provided sufficient motivation for its more extreme security policies. This policy preference is so strong, that Pakistan has refused to abandon it despite the American invasion. However, with the American withdrawal looming, it remains to be seen if Pakistan-Taliban alliance will survive yet another dramatic shift in the regional balance.

[13] Hanauer, Larry, and Peter Chalk. India’s and Pakistan’s strategies in Afghanistan implications for the United States and the region. Santa Monica, CA: RAND, 2012. 30

[14] Hanauer, Larry, and Peter Chalk. India’s and Pakistan’s strategies in Afghanistan implications for the United States and the region. Santa Monica, CA: RAND, 2012. 25.

[15] Hanauer, Larry, and Peter Chalk. India’s and Pakistan’s strategies in Afghanistan implications for the United States and the region. Santa Monica, CA: RAND, 2012. 2.