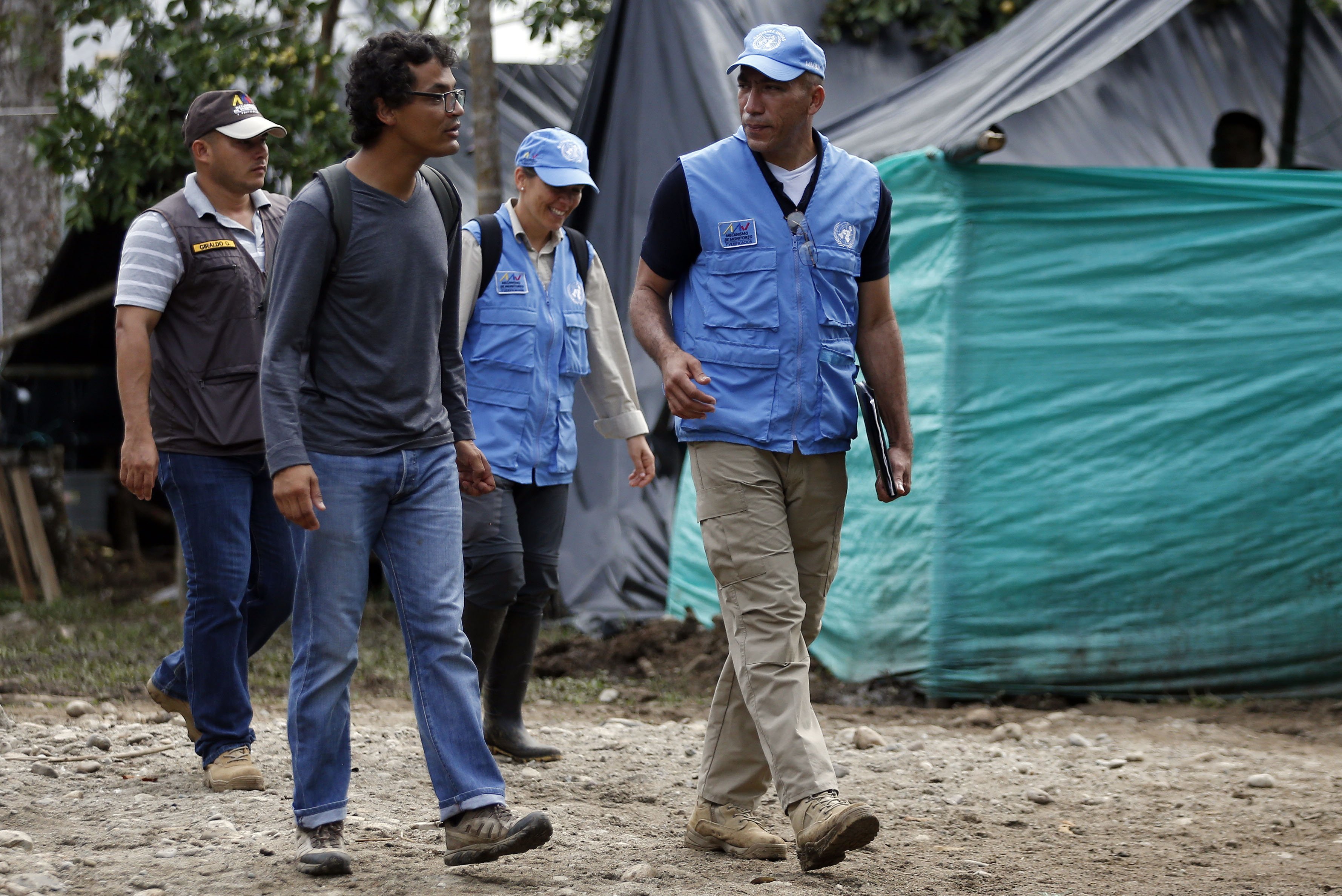 United Nation observers arrive at a rebel camp of the Revolutionary Armed Forces of Colombia, FARC, in La Carmelita near Puerto Asis, in Colombia's southwestern state of Putumayo, Wednesday, March 1, 2017. Thousands of leftist rebels are taking an important step in Colombia’s peace process by providing to UN observers an inventory of the weaponry they will soon surrender. (AP Photo/Fernando Vergara)
Share

Sixty years, 220,000 deaths, seven million displacements and one failed referendum later, the Colombian people finally breathed a sigh of hopeful relief as the gruesome civil war between the government and the Revolutionary Armed Forces of Colombia (FARC) came to a close. While December 2016 saw what Colombian president Juan Manuel Santos deemed the definitive end to atrocities between the two disputing parties, time has proven that there is still a long road ahead.

Seven months after the historic peace deal was signed, its implementation has not proven easy. With deadlines being pushed further and further back, the deal’s delayed enactment can in part be attributed to issues with disarmament, congressional roadblocks, issues with re-integration, and the risk that this fragile peace could, in fact, trigger more bloodshed.

The deal’s first obstacle emerged from the Colombian legal branch. Learning from the failed referendum that pushed both parties back to the negotiating table, President Santos sent the revised deal straight to Congress as opposed to holding another plebiscite, for fear that it would once again be rejected by the Colombian people. On May 17, despite the government’s desire to accelerate the peace process, the constitutional court ruled against fast-tracking, or speeding up the passage of, all legislation related to the peace agreement. More specifically, Congress’s ability to vote on a full bill without amendments or modifications (votar en bloque) has been eliminated by the court, and a pre-existing requirement that the executive branch approve of changes to implementing laws under fast-track was struck down as well. The risk associated with these rulings lies in the uncertainty they bring.

The government’s lead negotiator in the FARC talks, Humberto de la Calle, worries that this ruling “opens the door to a cascade of modifications to what was agreed”, calling into question the government’s commitment to peace. Indeed, without the ability to allow expedited passage of laws to enact the peace accord’s commitments, what was agreed to in Havana risks being altered in Congress, especially if next year’s election results in an anti-deal government to the benefit of Iván Duque, a senator from the opposition party led by former president and No campaign proponent Álvaro Uribe, whose legal suit spurred this decision by the Court.

A crucial step towards the FARC’s transition from an armed group to a legitimate political actor is disarmament. While the FARC began surrendering their weapons under UN supervision in March, delays in the completion of this process have lengthened the deal’s disarmament phase many times. The FARC’s entire stockpile of weapons, ammunition and explosives was supposed to have been turned over to UN supervisors by May 31st, but their precariously located caches, many buried deep in the jungle and surrounded by landmines, caused this deadline to be missed. Earlier this month, President Santos declared June 23 to be “a historic day in Colombia’s definitive transition to peace,” only to announce a few days later that only 60% of the arms had been handed over, while 40% remained in the FARC’s hands. Although Santos’ new deadline, June 27, was achieved, many FARC caches have yet to be located and dismantled, which could take months.

Despite these delays, Santos is certain that the peace deal with the FARC is irrevocable, and that “even its critics would not dare return to the days of guerrilla warfare.” Santos argues that securing long-lasting peace “is like building a cathedral. It [goes] brick by brick.” Moreover, FARC leader Rodrigo “Timochenko” Londono echoed these sentiments, tweeting that “the leftist rebels were laying down their guns with enthusiasm.”

If achieved on June 27, the disarmament “brick” is only the first of many. The re-integration of FARC rebels into society will be the likely next step, and a difficult one at that. Opposition to the impunity-evoking clauses of the deal, spearheaded by ex-president Urribe, fuels much of the public’s distaste for the deal and, consequently, distaste for the absolving of perpetrators’ sentences and not only their re-integration into society, but also into the Colombian government as a legitimate political force. To that end, many civilians are concerned that a pardoned FARC could bring about increased bloodshed by allowing former FARC rebels to join other guerrilla groups, such as the National Liberation Army (ELN), or embedding themselves deeper in cocaine production and distribution.

Robert Karl, a Princeton historian and author of Forgotten Peace: Reform, Violence, and the Making of Contemporary Colombia, shares this fear of bloodshed. In an interview with UAE newspaper The National, Karl emphasized how crucial the integration of demobilized FARC fighters into larger Colombian communities will be, and how concerning recent attacks on FARC members and their families are. With violence already unfolding, the danger of its increasing once re-integration is in full force could dismantle a key facet of the deal.

In the face of much uncertainty and adversity, President Santos has a definitive incentive to pursue the peace deal’s successful implementation. With congressional and presidential elections set for next year, and a current approval rating of 24%, Santos’ legacy rests on “building his cathedral” to completion. Although he cannot run again, President Santos must prove to his electorate that the peace process is working in time for the first election that will include FARC in both the Senate and the lower house. Santos’s opponents, namely those who campaigned against the first referendum, will likely try to “unpick” the deal if elected. Thus, swift action is needed on behalf of the Santos government in order to protect the relationship of trust between the FARC and the Colombian government that has taken decades to build.

Thus far, the strength and resilience of the Colombian people have served as the most important vehicle for peace. As the disarmament phase comes to a close and that of re-integration begins, all eyes will be on government as Colombia holds its breath, yet again, in hopes that this time, peace will last.