Towards an Alternative European Government? 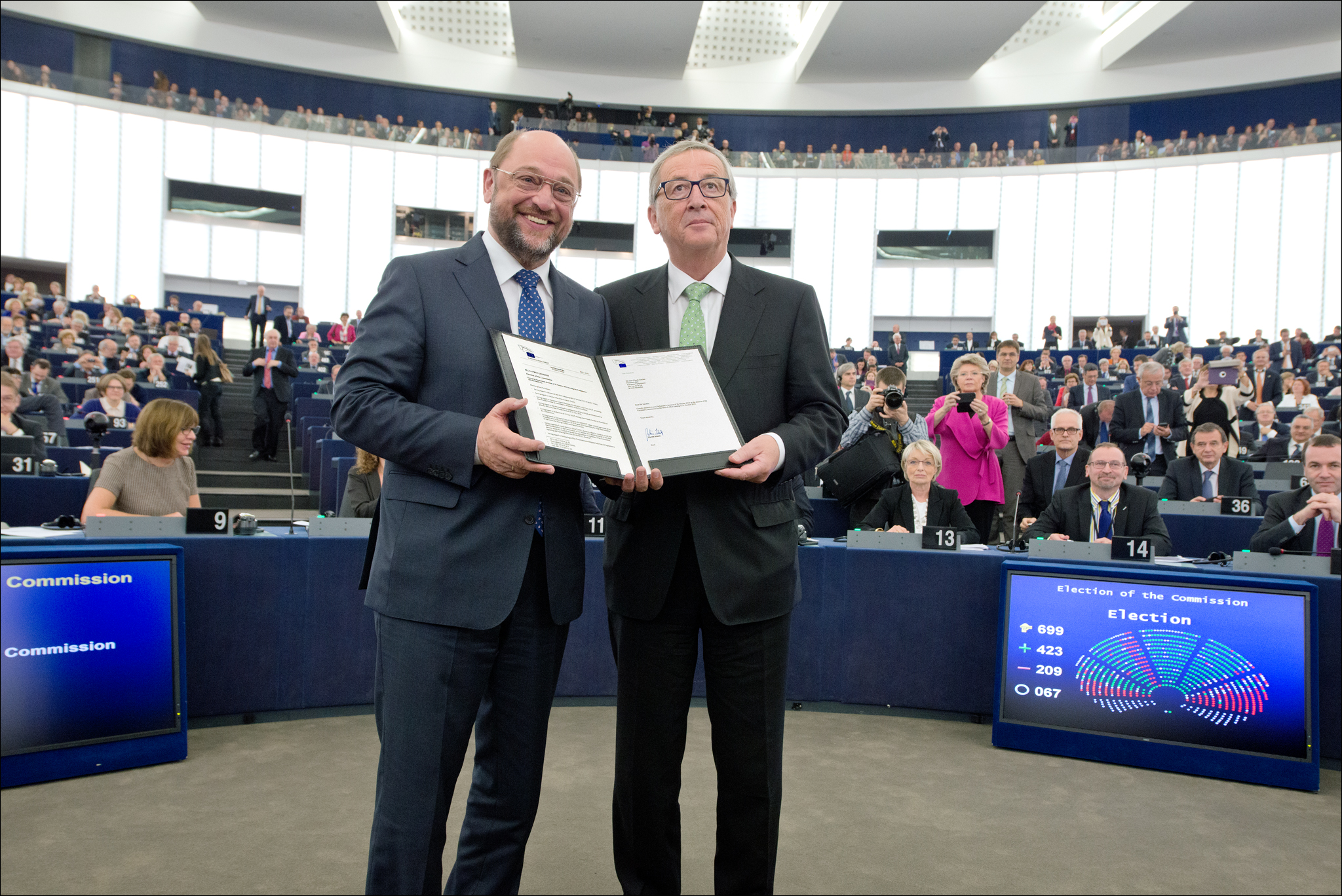 Commission President Jean-Claude Juncker (of the People's Party) and Parliament President Martin Schulz (of the Socialists), being more collaborative than they perhaps need to be. https://flic.kr/p/pu3BJY © European Union 2014 - European Parliament
Share

By any measure, the European Union is currently in something of a crisis, if not an outright mess – many of its economies (including two of its largest, France and Italy) have remained stagnant, members states are fighting with each other to accept as few refugees as possible, and far-right parties have surged in polls in numerous countries, a trend only accelerated following Britain’s decision this summer to leave the bloc.

In fact, the EU has been consistently in a mess – at least economically – since 2008. Which is odd upon further reflection, since eight years is usually the point by which the governing party has been thrown out for mismanaging the economy and replaced by a different government. This is a trend we’ve seen over the past decade in the US and many European countries; even Japanese voters did something they’d never done in fifty years and thrown out an incumbent government. But for some reason, in the EU, it’s a different story.

To be clear, there is a pan-European elected body that has actual power to pass laws (the European Parliament) as well as an executive, responsible to this Parliament, with the power to propose laws (the European Commission) – never mind the Brexiteers’ claims that EU policy is dictated by “unelected bureaucrats”.

However, there’s a reason these claims of unaccountability ring true – though there are European-wide elections every five years, there don’t really change anything; the European Parliament has, through much of its history, been governed by a “grand coalition” of the People’s Party (centre-right) and the Socialists (centre-left). At the beginning of each term, the two parties come to an agreement to divide up the various posts, including the Commission (think “Cabinet”) portfolios, parliamentary committees, and the Parliament President (think “Speaker”), which usually alternates between the two parties.

Therefore, if the Socialists had come in first during the most recent elections instead of the People’s Party, there would have been a few cosmetic changes – a socialist as Commission President (think “Prime Minister”) instead of a conservative – but little change in the overall centrist orientation of policy, with some spending at the European level but no decisive break with austerity, certainly no European-wide welfare state.

This tradition is why Europe has seen the same policies despite a decade of stagnation, why the EU is seen to be bureaucratic and managerial in nature, and also why frustrated voters have been turning increasingly to populist far-right parties – because there is no “loyal opposition” (i.e. an plausible alternative government) to vote for. It also at least partly explains abysmal turnout in European elections – even countries like Germany with strong turnout in national elections see less than half of their electorate vote in European ballots.

This lack of a European leader with a mandate to enact a vision means other actors fill the void. Major attention was given, following the Brexit vote, to a summit of the leaders of France, Italy, and Germany convened to reassure the world – which is a bit odd, since those three countries represent less than half of the EU population (imagine Kathleen Wynne and Philippe Couillard holding a summit to act as the voice of Canada!). The German government led by Angela Merkel has had an over-sized role in shaping European policy (especially policy concerning the euro), even though only 18% of the European population has ever had the chance to even vote on her. And there are other cliques of national leaders (like Eastern European leaders opposed to accepting refugees, or Mediterranean leaders opposed to austerity) trying to get attention, clamoring for regional interests – none of whose plans have ever been put before the European population as a whole.

This is probably around the point where Americans caution me against advocating for more partisanship in politics. This is a fair point; I absolutely accept that a scenario in which the two American parties operated grand-coalition style would probably be better for the country than the status quo, and that forming two opposing blocs could lead to stalemate in Brussels. This would happen if the Council of Ministers (chosen by the national governments), which needs to approve legislation, doesn’t agree with the partisan inclinations of the Parliament. That said, the multi-party nature of European politics means that any government, socialist or conservative, will still need to form bridges with others (with the Greens, the far-left, or the Liberals, perhaps), making American-style gridlock unlikely.

In any case, none of those specifics matter so long as European politics is considered unimportant, inconsequential, just an avenue to vent frustrations. There needs to be, as the Socialist Party chairman proposed in the first post-Brexit Parliament debate, a “true European political space”.

There have been a few moves in this direction since Brexit. One was the creation last month of a “progressive caucus” among members of the socialist, green, and radical-left parties – an example, in other words, of some socialist representatives opting for a more ideologically-oriented, anti-austerity bloc. There have also been proposals to reform the Union crafted purely by social-democratic leaders – perhaps the beginnings of a substantive socialist platform..

For the moment, party leadership are opting with the grand coalition, though even this may not hold for long: a fight over redistributing top EU jobs has exposed a rift between the major parties. There is a distinct possibility that, come next January, all three top EU positions (Commission President, Parliament President, Council President) will be held by conservatives, and the socialists seem to be considering this a step too far.

If the socialists take this chance to show some more backbone, I’d consider that a positive development. They should threaten to bring down the grand coalition if they need to; the socialists shouldn’t be taken for granted as a junior partner. The next elections are two and a half years away, enough time to craft a coherent and convincing alternative to the status quo – it’s time that these elections actually matter.