Towards an “LGBT-Free” Poland? 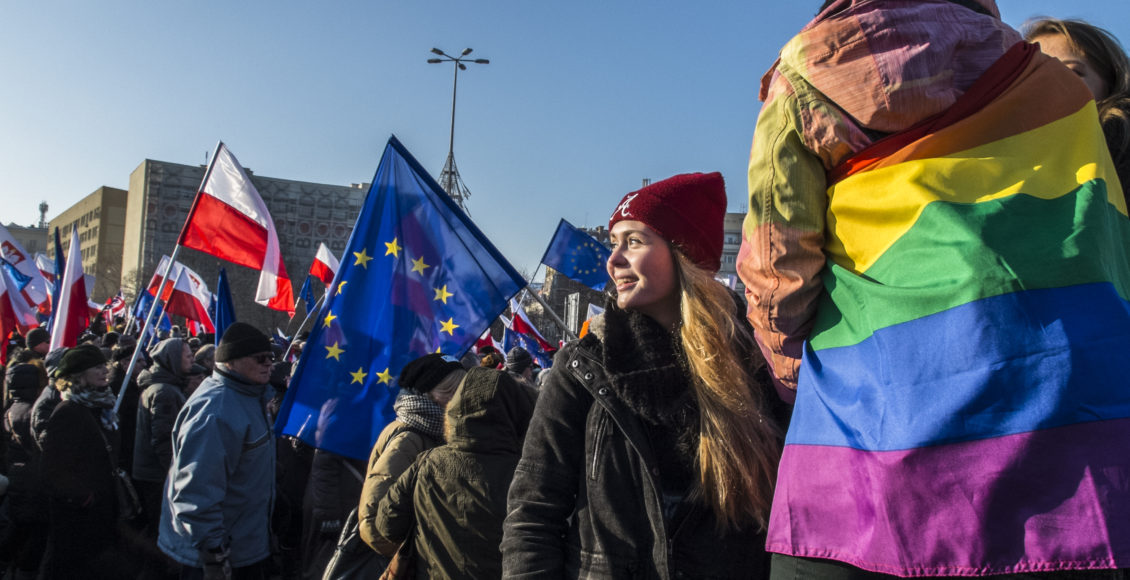 In the years following the collapse of the Union of Soviet Socialist Republics (USSR), the Third Polish Republic quickly rose as one of the most promising democracies and market economies in Eastern Europe. However, Poland’s remarkable economic and political liberalization has not led to commensurate progress for more complex social issues, particularly LGBTQIA+ rights. The illiberal face of democratic Poland is reflected in the presidency of Andrzej Duda, who was elected in the spring of 2015 amid a tide of nationalist right-wing populism. With growing institutionalized homophobia accompanying this political shift, Poland’s LGBTQIA+ community has had to contend with increasingly hostile spaces. Aside from alienating many in this community, Duda’s rise has also contributed to a wider societal aversion towards a diverse and inclusive Polish identity. Held next month, the next Polish presidential election will prove to be fateful for the country’s sexual minorities.

In the years following Poland’s independence from Soviet influence, the Third Polish Republic emerged as a thriving new democracy. Through rapidly implemented neoliberal economic reforms, the country was able to quickly attain some of the highest socio-economic standards among former communist states in Eastern Europe.

However, Poland’s economic miracle did not deliver improvements in the lives of all of its citizens. Although the country’s economy was ahead of other former Soviet Bloc members by the mid 1990s, it was still lagging behind most states in Western Europe. To illustrate the contrast, Poland’s Gross Domestic Product (GDP) amounted to US$142.7 billion in 1995, whereas Germany recorded a GDP of over US$2.585 trillion that same year. The 2008 financial crisis only fueled further precarity among Polish middle and lower-classes. By the end of the crisis, then-President Donald Tusk had still yet to offer any substantial plans to alleviate the enduring hardships facing many Polish people.

It is in this context of mixed economic growth and relative precarity, that the right-wing conservative party Prawo i Sprawiedliwość (Law and Justice, abbreviated PiS) rose to power in the 2015 presidential election under the leadership of Andrzej Duda. PiS promised a departure from the neoliberal policies that marked much of Poland’s economic development after 1989, which many associated with growing insecurities. Duda’s platform also prominently featured the idea of a ‘national community’ centered around the traditional idea of white, Catholic ethnic Poles to galvanize support among conservatives. In a country that has long suffered under Soviet-Russian, German, and to a lesser extent, French domination, Duda’s ‘national community’ had a broad appeal in its promotion of a distinct Polish identity.

However, this conception of a Polish national community has also proven to be hostile to sexual minorities. As a fervent Catholic, Duda explicitly built his 2015 presidential campaign on a commitment to the Catholic Church and its conservative values, specifically the Church’s views of the family: a nuclear unit emphasizing the importance of heterosexual marriage and having children. In this sense, Duda’s political platform clashes with more progressive notions of non-traditional marriage as well as gender identity and sexual expression more broadly. The national promotion of a white Catholic family has not only directly antagonized sexual minorities in Poland, but it has also served as the basis for alienating LGBTQIA+ citizens politically and socially.

Since Duda’s election, PiS has shifted its platform to a strictly hardline homophobic position, galvanizing waves of hate crimes against sexual minorities throughout the country. This represents a major backsliding in Polish politics, which had only welcomed its first LGBTQIA+ politicians in the aftermath of the 2010 parliamentary elections.

This new wave of homophobia notably manifested itself last July during the very first LGBTQIA+ pride parade held in Białystok. In this event, around 1,000 people marching to promote equal rights for LGBTQIA+ citizens were met with about 4,000 counter-protestors. During heated confrontations with marchers, members of the opposition used slurs directly targeting sexual minorities, including derogatory words such as “pervert”. The city of Białystok is located in the Podlasie Voivodeship (“province”), which happens to be the PiS’ historic stronghold. The fact that Polish people in that specific region violently took to the streets to oppose equality for the LGBTQIA+ community shows how reactionary attitudes have been emboldened under Duda’s presidency.

This pattern has also emerged in Poland’s more liberal enclaves. While the Warsaw’s Pride Parade, held annually since 2015, has been free from the violent confrontations seen in Bialystok, it has recently been met with more critical reception. In the spring of 2019, for instance, Warsaw Mayor Rafał Trzaskowski, of the opposition party Platforma Obywatelska (Civic Platform, abbreviated PO), faced a backlash from PiS party members and some officials of his own party for his decision to march in the parade.

Around the same time, institutionalized homophobia in the country reached a climax with the creation of “LGBT-free zones” across Poland. As of February 2020, over 100 Polish municipal or local governments have proclaimed themselves to be “free from LGBTQ ideology” (it is unclear what exactly ‘ideology’  refers to in this context). PiS party members have used this distinction to clarify that they are not opposed to LGBTQIA+ individuals themselves, but rather their “ideology.” Considering party members’ strong conservative stances regarding sexual minorities, this nuance seems to be little more than rhetorical veneer for their homophobia. In fact, many of these zones are led by PiS elected officials, who have stated that “forcing LGBT on children” was a direct attack on Polish families, echoing the Catholic nuclear family that is at the heart of Duda’s national community.

The establishment of LGBT-free zones has also greatly influenced a right-ward shift in popular sentiment. For example, last summer, a local news magazine, Gazeta Polska, announced that they would distribute “LGBT-free zone” stickers to their readers. Bordering on hate speech, this initiative demonstrates the considerable influence that PiS’ unapologetic homophobia exerts on non-state actors. Although Gazeta Polska is so far the only newspaper that has explicitly endorsed LGBT-free zones, its editorial decision reflects a broader pattern of anti-LGBTQIA+ rhetoric throughout Polish society. Just two years after PiS entered government, a report by the Centre for Research on Prejudice of the University of Warsaw found that exposure to hate speech against LGBTQIA+ people had increased by 25%, ranging from homophobic statements to explicit allegations of “curing” homosexuality.

By explicitly endorsing homophobic rhetoric, the government has essentially granted both media and ordinary citizens an opportunity to promote offensive propaganda without consequence. In supporting the creation of LGBT-free zones, Gazeta Polska has actively encouraged its readers and the general public to also embrace anti-LGBTQIA+ views, thus perpetuating a vicious cycle of homophobia. As these events unfold just a few months before the upcoming presidential election, LGBTQIA+ people in Poland face poor prospects for their rights and safety.

The next presidential election in Poland is scheduled on Sunday, May 10, 2020. At the time of writing, ten candidates have announced their intention of running in the election. Among them is incumbent President Duda, who is eligible to run for a second term. Duda’s current popularity may be a source of worry for LGBTQIA+ citizens. According to one recent survey conducted by the Centre for Public Opinion Research, Duda’s approval ratings are among the highest of any president in the country’s history, standing at 72% in February 2018.

Moreover, in a recent online voter poll conducted by the Statista Research Department, Duda is shown to have the best chances of winning the election: 43.7% of respondents pledged their support for him this May. The second most popular candidate, Małgorzata Kidawa-Błońska, who is running for PO, only garnered 29.2% of voter support in the same poll. Nonetheless, she still represents the most credible opposition to Duda. In contrast to Duda’s conservative and exclusionary platform, Kidawa-Błońska has built her campaign on national unity amidst the cultural, religious, and socio-economic differences of Polish citizens.

Although Kidawa-Błońska poses the greatest threat to Duda’s presidency, her campaign is undermined by two significant shortcomings. First and foremost, she is a woman running for the presidency in a country where men have long dominated politics. Despite her claims that “Poland is ready for a female president,” her gender is undoubtedly going to play against her as Duda can count on massive support from Polish conservatives. Second, Duda’s first term has been successful in terms of overall economic growth. Despite earlier pessimistic projections, the Polish economy has proved to be surprisingly strong in the past few years: GDP grew 4.3 percent from 2016 to 2018. Therefore, Duda’s bid for a second term is likely to attract a strong turn-out in his favour this May.

Duda’s administration has produced a hostile environment for LGBTQIA+ citizens of Poland, echoing many of the country’s deeply-rooted culturally conservative traditions. Given his present popularity, it is hard to imagine that any opposition party can credibly challenge PiS’ hold on the Polish presidency. With less than three months until the election, and given voter polls that seem to strongly favour Duda and the PiS, the future of the LGBTQIA+ community in Poland seems bleak. As the country’s populist wave continues to swell, prospects of equality and safe spaces for sexual minorities recede into an ever distant reality.