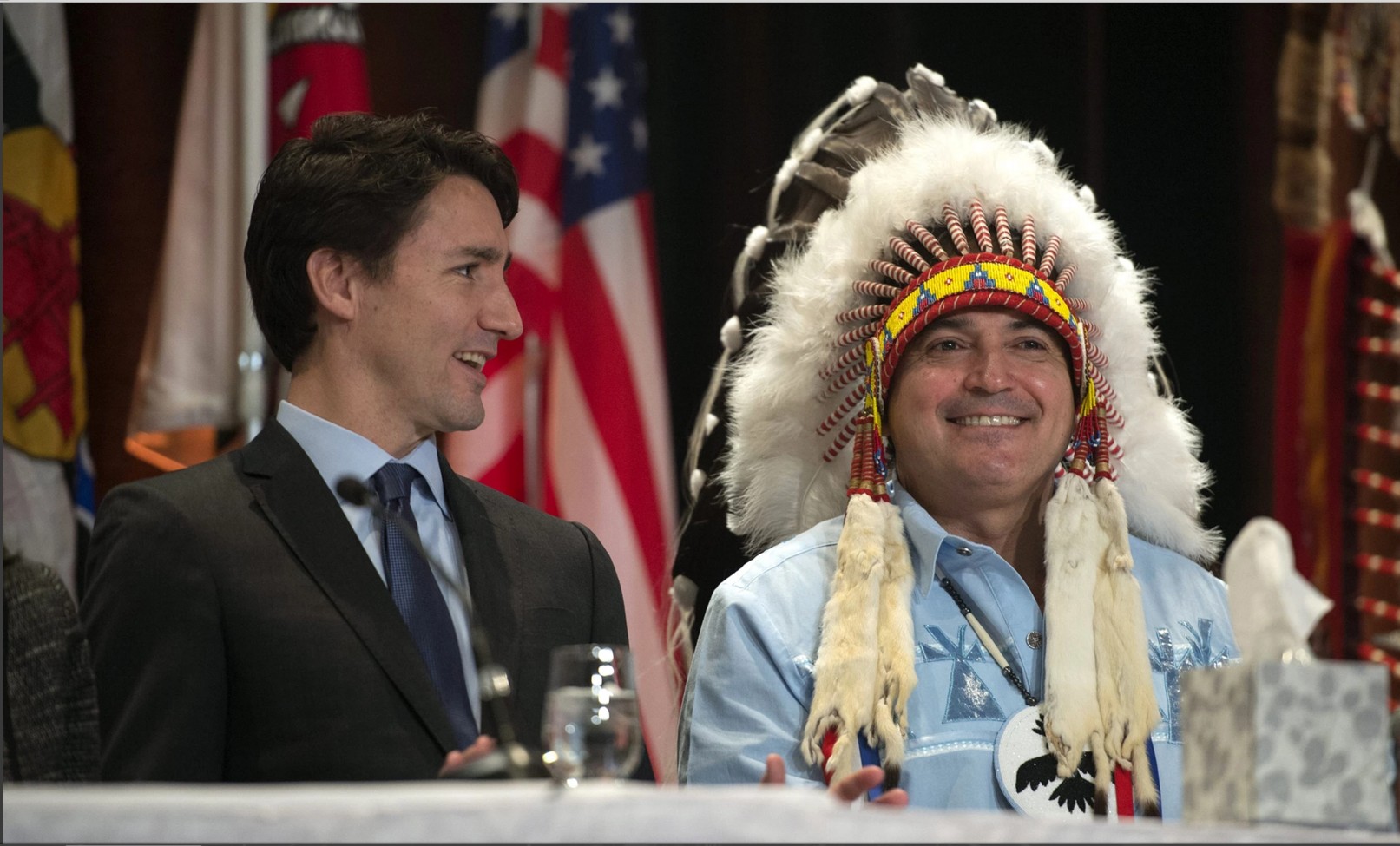 In September, I published an article looking at the abominable treatment of Canada’s Aboriginal community by its government, particularly addressing its indifference toward the missing and murdered Aboriginal women and girls. For decades there has been no national inquiry launched to look into this crisis, despite pleas coming from both in and outside the Aboriginal community. It was only when Justin Trudeau was elected as Prime Minister that on December 8, 2015, that he announced on his Twitter account “the launch of a national inquiry into missing and murdered Indigenous women and girls.” This is a victory for the Aboriginal community – a moment in time when it seems that an administration is willing to listen to and prioritize the needs of the Aboriginal peoples. In this article I will first look at the positive re-mediations so far since the 2015 elections, then examine the remaining problems to address.

In early December 2015, Trudeau addressed representatives of Canadian indigenous communities, announcing five campaign commitments that are aimed at reforming the relationships between the government and Aboriginal groups. One of these commitments includes investigating the missing and murdered women that aims to “address root causes, societal factors, government failings, and general circumstances” that affect the said cases of violence. For the next few months the government plans to make consultations with various indigenous people and organizations before launching the inquiry, which will take approximately two years. Trudeau also said the Liberal government will invest $2.6 billion in First Nations education and $500 million in infrastructure for First Nations schools. Another significant commitment was the pledge to remove the cap that restricts the band councils’ annual budget increase at 2%. All of these promises Trudeau has agreed to are a part of “nothing less than a total renewal of the relationship between Canada and First Nations Peoples.”

Along with the commitments Trudeau has made, he has officially apologized to Indigenous communities for the unjust treatment they suffered from for more than a century. Trudeau will also “call upon the Pope to issue an apology to survivors, their families, and communities for the Roman Catholic Church’s role in the spiritual, cultural, emotional, physical, and sexual abuse of First Nations, Inuit, and Métis children in Catholic-run residential schools” between the 1840s and 1990s.

A report by the Truth and Reconciliation Commission revealed horrifying details of the abuses that Aboriginal families faced, which includes physical abuse, rape, and malnutrition. Over the course of a century, 150,000 Aboriginal children were stolen by the state and put into residential schools, and over 6,000 children died from their suffering. Cases of sexual abuse, poor living conditions, and emotional abuse were not uncommon, and indigenous students experienced “severe punishment” for speaking their native languages. Most students only went home two months of the year, while some didn’t go home at all. The goal of these schools was to completely assimilate the Aboriginal population; according to the Truth & Reconciliation Commission of Canada, these children were forced into these schools because the government “wished to divest itself of its legal and financial obligations to Aboriginal people and gain control over their lands and resources.” In the words of Justice Murray Sinclair from the Truth & Reconciliation Commission, “What took place in residential schools amounts to nothing short of cultural genocide.” When students returned to their reserves, they often didn’t have the skills to help their parents and were ashamed of their native heritage. The after effects of residential schools were long-lasting; a recent study by Statistics Canada has shown that more than one in five indigenous adults report having suicidal thoughts, and these are heavily linked to residential schools.

One point of contention is that his government will not immediately abolish The Indian Act, a legislation seen by many as “a racist document.” The Indian Act, first passed in 1876, governs many aspects of Indian life including Indian status, bands and reserves. Since its conception it has been known to be “highly invasive and paternalistic,” as it allows the federal government to control the day-to-day lives of registered Indians and their reserve communities. Although there will not be immediate action, Carolyn Bennett, Minister of Indigenous Affairs, is responsible for reporting to Parliament on the progress to fully eliminate the Act by early 2016.

Shawn Atleo, a member of the Assembly of First Nations, is one of many to heavily criticize The Indian Act: “[it] controls us from cradle to grave. When we are born, the act lets the government decide who is and is not an Indian. When we die, the act gives the government control over our wills and estates. In fact, it gives the government power over pretty much everything in between. It allowed the government to apprehend our children and place them in residential schools. It holds our political and economic development hostage to an ever-growing and burdensome bureaucracy at Indian Affairs.”

On top of all that has been done so far, a “total renewal” of the government’s relationship with its First Nations would require radical changes to the education system. Students are still not taught the realities of colonialism and its impact on the Aboriginal communities in Canadian history classes. Misinformation still widely thrives amongst Canada’s population in regard to the First Nations peoples, which contributes to social stigma surrounding indigenous peoples. Most of the population is ignorant to their immense ethnic and cultural diversity and the complex relationships amongst the indigenous peoples. Therefore, it is integral to alter education systems to honour the truth of Canada’s past and move on to a more fair and respectable future.

Nothing will repair the damage inflicted upon the Canadian First Nations community, but what Trudeau is doing so far surpasses decades of past government administration. As long as Trudeau’s government performs as promised, the long-time efforts of indigenous movements such as Idle No More will prove to have been worth multiple generations’ struggle.