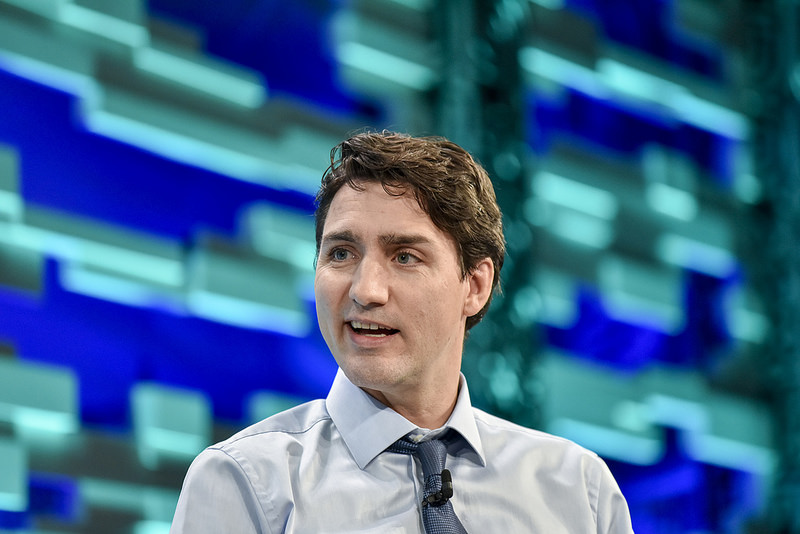 On May 14, thousands of Palestinians participating in the Great March of Return in the Gaza Strip were met by Israeli armed forces at the two regions’ buffer zone. By the end of the day, at least 60 demonstrators were killed and 2700 more wounded after the Israeli army fired live ammunition, tear gas, and firebombs. Two days later, Canadian Prime Minister Justin Trudeau released a much-needed statement condemning the excessive violence and calling for an independent investigation into the events. As diplomatic and humanitarian as it seems, there’s a hypocrisy hidden in the PM’s statement that continues to reveal itself through Canada’s decisions.

Trudeau’s response came in the context of a Canadian physician being shot in both legs while treating injured Palestinians in the Gaza strip. “Canada deplores and is gravely concerned by the violence in the Gaza Strip… We are appalled that Dr. Tarek Loubani, a Canadian citizen, is among the wounded – along with so many unarmed people, including civilians, members of the media, first responders, and children” he said, assuring correspondence with Israeli officials to “get to the bottom of these events.”

While it was some of the strongest criticism toward Israel that Canada has ever issued, Trudeau’s statement does not once mention Israel’s military as an offender. Regardless of whether Canada is pro-Israel or pro-Palestine, there is a humanitarian standard to uphold which has been ignored. The protesters in Gaza were initially nonviolent. They have suffered the deleterious effects of the Israeli blockade for more than a decade, giving them good reason for their protest. As an occupying power, Israel is obliged to ensure the welfare of those in occupied territories. Canada formally recognizes this and yet stayed quiet during Israel’s unlawful opening of fire.

At the time of the statement’s release, the death toll had risen to 111 Palestinian civilians, with more than 12,700 injured. Still, Trudeau received considerable backlash from actors in both Israel and Canada. Israeli Prime Minister Netanyahu blamed the terrorist group Hamas for inciting the violence, justifying the response as a security measure. The statement not mentioning Hamas is what Netanyahu’s supporters, including the United States, disapproved of, claiming that the terrorist organization was wholly responsible for provoking the bloodshed. Although Hamas themselves later stated that their members constituted a large amount of the protestors, the disproportionate and illegal action of the Israeli army makes this number irrelevant.

The young Palestinians, armed with nothing except perhaps slingshots and Molotov cocktails, were absolutely no threat to the hundreds of Israeli snipers, airstrikes, and explosive devices. Neither were the children and infants caught in the tear gas, the journalists, the innocent bystanders, or the people exercising the basic democratic right to protest. Yes, Israel has the right to defend itself, but there was no need or justification to target non-hostile demonstrators. Civilians’ suffering from conditions of unsafe drinking water, no electricity, unemployment, and psychological pressure in the Gaza Strip only worsened, while not a single Israeli was harmed.

Putting the blame on Hamas only further degrades Palestinians by necessarily conflating exercise of basic civil liberties with terrorist activity. Regardless of the purpose of their movement, the act of peacefully protesting injustice is not an act of terrorism. Hamas was not the root cause of the protests either, and pretending that it demeaned the power of grassroots political and civil society forces that drove tens of thousands of Palestinians to action. If Canada is truly “gravely concerned” by the violence against Palestinian citizens, Trudeau and his government need to recognize and openly assert that “Gaza is not Hamas“.

Although an “independent investigation to thoroughly examine the facts on the ground” is a commendable start, the Prime Minister also failed to outline who exactly would be carrying out this investigation, and leaves Canada’s role vaguely as “ready to assist in such an endeavour”, “[working] closely with our international partners and through international institutions”.

If Trudeau’s resolve is genuine, then why is it that at the UN Human Rights Council session that same week, Canada expressed opposition to a resolution put forth by Pakistan and other Muslim countries, calling for an “independent, international commission of inquiry?”.” Although it was not one of the 47 countries with a vote, Rosemary McCarney, Canada’s representative to the UN in Geneva, explained the bias inherent in the resolution as it “singles out Israel”. By not supporting a resolution that finally works to end Israel’s global impunity for ongoing crimes, the Canadian government pushes international humanitarian law under the rug. In terms of legal violations, this idea of carrying out “balanced” research seems unsuitable following a clearly asymmetric conflict. We should all be apprehensive, considering Trudeau’s emblematic nature in leading a democratic country that stands for justice and human rights. The resolution ended up being passed anyway, 29-2, with the United States and Australia against.

In any case, scholars of Canadian politics have begun to note how “Canada’s voting record at the UN under the Trudeau government thus far is among the most pro-Israel in the world and is markedly different than Canada’s voting record under [Jean] Chrétien and [Paul] Martin”. For instance, Canada voted against a World Health Organization fact-finding mission to assess the health conditions in Gaza and the West Bank. And while the state exemplified its supposed concern for unbiased probing on the international stage, this didn’t seem to be a problem for the smaller inquiry into the Canadian doctor’s shooting, which is being carried out by the IDF, and which the Canadian government declined Israel’s invitation to participate in. Dr. Loubani himself doubts the impartiality of the Israeli military investigating his case, pointing out that “there is no greater conflict of interest than a party investigating itself for an accusation that is being made”.

The reasons for Trudeau’s almost censored response to the crisis in Gaza, often compared to those of former PM Stephen Harper, could be viewed as prioritization of personal convictions over Canada’s national interest. Many claim his silent support for Israel was an attempt to win the Jewish Canadian vote, one of the demographics that lashed out against the recent statement. Interestingly, a recent survey by Canadians for Justice and Peace in the Middle East found that even though Canadians were more likely to have a negative opinion of the Israeli government, they also believed their own government to be biased in favour of Israel. The Chair of JSpace Canada, a progressive and pro-peace Jewish organization, said in her statement that Israel “must never use lethal force against unarmed protesters”. How much more indication is needed for a reassessment of Canada’s unrepresentative action on the violence in the Gaza strip?

Trudeau’s statement was certainly not something minor given the context of his quiet loyalty to Israel. However, it can only retain its meaning if the Canadian government performs accordingly. As an ally and fellow liberal democracy, Israel can count on Canada for support when its security is threatened. May 14 was not such an instance. Canada must take a stronger stance in denouncing Israel’s unwarranted, undemocratic, and militant reaction.