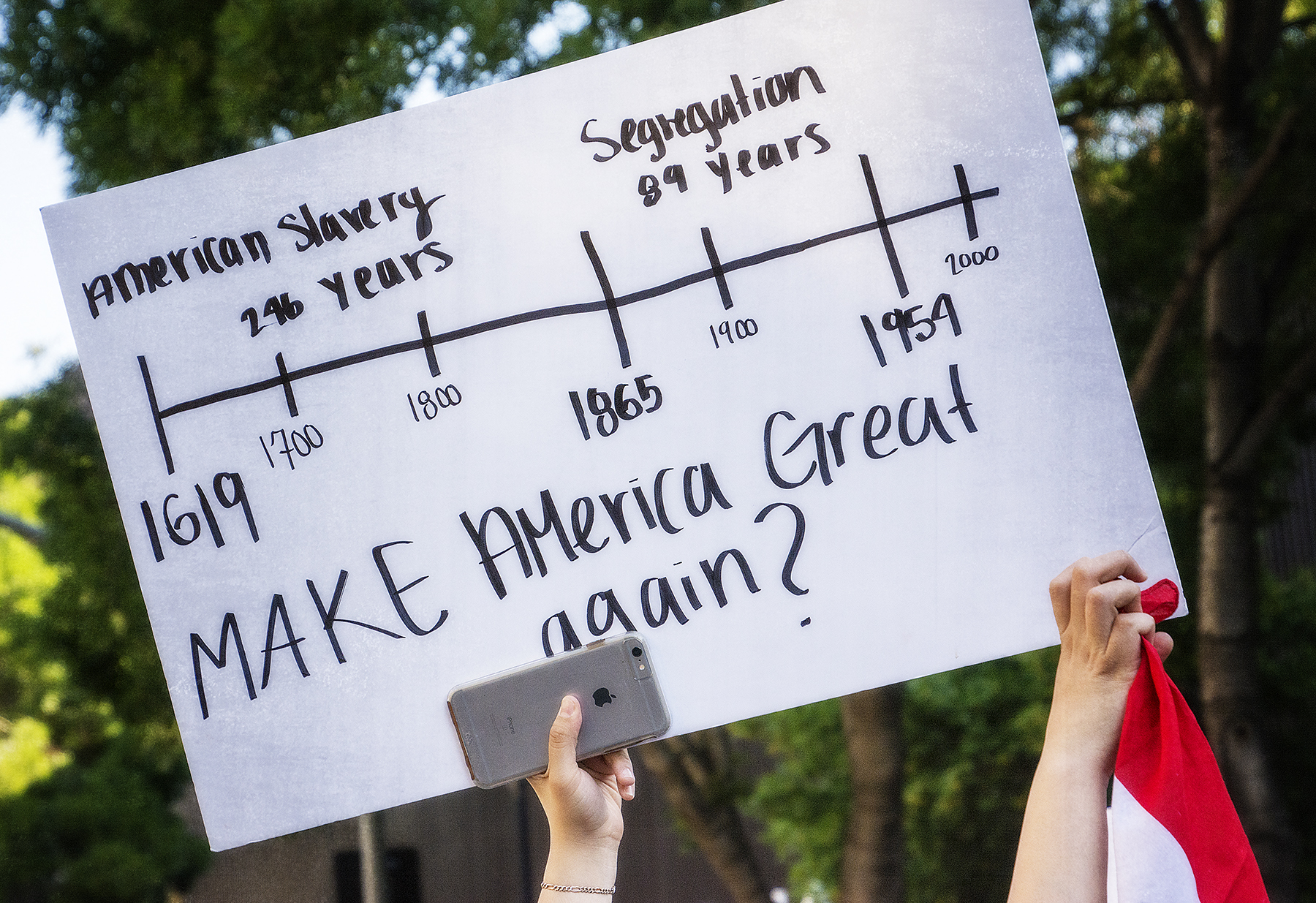 Leonard J. Moore is a professor at McGill University in the Department of History and Classical Studies, specializing in the study of 19th and 20th century American social and political history. He agreed to sit down with the McGill International Review to discuss parallels of the current American administration and social climate to American civil rights history.

Challenges that arise in civil and citizenship rights from the recent Trump administration are not a new American uprising; rather, “Trump[‘s] long record of racist and ethnocentric words and deeds” reinforce ideas of white nationalism that have long resounded throughout American civil rights history. His anti-immigration policies and claims regarding voter fraud are darkly tainted by a vision of a white republic. I sat down with Professor Moore to discuss the re-surfacing of white supremacy and how the Trump administration will affect the progress of American civil rights.

Do you think we have regressed as a society on maintaining the rights we once fought for in the American civil rights era?

I think that the United States today is facing a fundamental challenge to not just the achievements of the civil rights era from the 1950s and 60s, but through all of the events since then. I think it’s facing a challenge even to some of the accomplishments of the New Deal itself; things like rights of citizenship associated with economic security, social security, and under Lyndon Johnson, Medicare. The political constituency that elected Trump and the Republican party ever since the civil rights movement has been courting a kind of white resentment to a pluralistic vision of the nation that has been becoming a bigger and bigger reality demographically every year, and which was in fact a major force in the election of Obama. I think that Trump’s rise to power represents a racial backlash against the Obama presidency and I think that there is no greater evidence for that than the fact that so many of the people that voted for Trump, maybe some of those in the past that had voted for Obama, had switched their vote – voting profoundly against their own economic interest and expressed their anger and frustration with a kind of racial hatred and totally irrationally blaming of Obama. This notion of wanting to “Make America Great Again” or to “get our country back” – there’s a huge element of white nationalism and Americanness behind all of that.

The biggest and clearest example is the state of Kentucky that had about the worst public health statistics in the United States before Obamacare: approximately 20% of all people in the state had no health insurance. As a result of Obamacare, the rate of uninsured people in Kentucky dropped significantly to 9%. They were one of the states that embraced Obamacare and they called it “Kinect”, though I think a lot of people who were able to take advantage of it were not even aware that it was Obamacare. Kentucky then voted for Trump by a margin of about 30% and under Trump’s administration, the new Republican governor has promised to dismantle Kinect. I think that is a result of some white nationalism, and racial blindness, and prejudice. A reaction to Obama [expressing that] “we don’t even care or know what he did. He is a black man and we are expressing our fury by voting for Trump”.

Despite previous progress in the United States, white supremacy has always existed on some level. Why do you think this ideology has risen up once again throughout the Trump campaign and now in his administration?

The biggest force that explains this is the changing demographics in the United States. Obama’s election represented the fact that the United States is changing – it is becoming more ethnically diverse. The immigration laws of the 1960s opened up the doors to generations of immigrants from around the world that had been denied the opportunity to immigrate to the United States in the past, and at the same time there has been a broader acceptance of pluralistic or cosmopolitan values of movements into the cities. White rural areas are becoming more isolated and becoming more impoverished. There is less opportunity, they’re becoming more abandoned, and there is a kind of fury within the parts of white America that they’re being eclipsed and that their vision of what America is historically is ending. It’s not new for those feelings to exist. The immigration laws of the 1920s were based on racism and on the idea that people from all over the world outside of Northern and Western Europe were racially unfit to be American. So there is nothing new about this idea that the United States has always been and should always be a white republic, and so thus we see [ideas of] “building a wall with Mexico”, and anti-immigrant sentiments. A tremendous focus on Muslim-Americans expressed most powerfully in this recent Muslim ban has caused so much controversy. It is nothing new but it has caused a lot of tension and Trump is feeding the flames with all the oxygen he can provide.

Do you think some of Trump’s legislation and proposed constitutional change can undo civil rights progress, whether through law or social influence?

Domestically, one of my biggest concerns is that the Republicans know that they won this election as a minority party. They were not supported by the majority of the American people. Hillary won the [popular] vote by about 2% or 3 million votes. [The Republicans] have been aware of their declining power for a long time. That is why over the last 2 decades in particular, there have been attempts of voter suppression at the state level. My biggest concern is that they are going to nationalize those efforts, especially [due to] Trump’s argument that he lost the popular vote because there were 3-5 million illegal voters. There have been attempts in Kansas and in Arizona to require that voters come to the poll with proof of citizenship –whether a passport or birth certificate – though the courts stopped that. One of the architects of that plan in Kansas has been brought into the Trump administration and my big concern is that they are going to nationalize these voter identification laws of requiring people’s proof of citizenship if they are going to vote. This could shrink the voting day electorate dramatically. In the last election, the turnout rate was around 52%. If everyone who voted was required to show an original copy with their birth certificate or their passport, the turnout may be 30% or less. All of these are efforts to eliminate people from voting, including those who may be more inclined to vote for the Democratic party – people who are poor, people who come from minority groups, and people who are elderly. That is one of my greatest fears of civil rights violation that we face and that there is going to be a continuing, pardon the phrase, “trumped up charge of voter fraud and illegal voting” that will result in attempts to eviscerate voting rights for millions of American.

We have seen all of this and worse, but we are still living in the post-civil rights age. The civil rights movement of the 1960s transformed everything – not only for African Americans, but also set in movement rights for women, rights for other groups such as LGBT rights, and a whole new awareness of rights of citizenship and equality in society. Ever since that moment, there has been an ongoing backlash and the Republican party consciously has decided to cultivate that resentment, and has not stopped. One possible way we can see Trump’s election is that it was an electoral fluke. He won by a relative handful of votes spread over three states. He won the electoral college even though he lost the popular vote by a significant margin. This could be seen as the last gasp for people who believe in the white republic. The politics that brought Obama into office, twice, are a reflection of an emerging pluralistic vision of a nation. I’m hoping that this will regain traction. I’m hoping that this will be the age of Obama, with this election being an angry short term outburst against it. The forces that got Obama into office will continue to prevail in the long run. I’m hoping that we have entered into an “age of Obama” that [goes towards] the direction of equality and that this white nationalist movement that has come to power will be rejected. So far, the millions of Americans turning up in the streets have expressed their dissatisfaction, with millions of other people around the world doing the same – hopefully it will continue and result in opposition that is strong enough to overcome what has happened.