Trump’s Election: An Opportunity for the European Union? 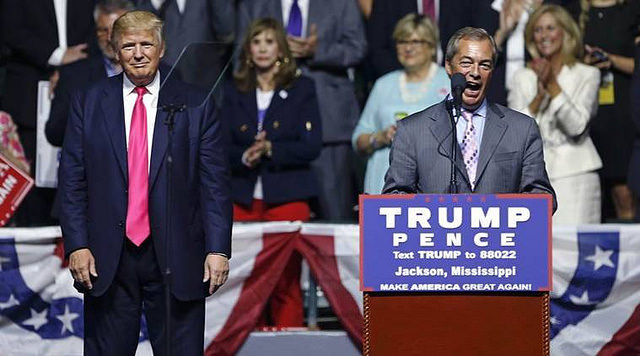 In response to the recent election of Donald Trump as the next president of the United States, the attitude adopted in Eurocratic circles seems to be “wait and see.” European Union (EU) leaders acknowledge Trump’s rash statements regarding foreign affairs, but what seems to take precedent is Trump’s erratic character, which renders which actions he will actually undertake uncertain. Cautiousness is of the essence then – and as the EU has been playing a game of patience in regards to the United Kingdom’s Brexit decision, it already has a bit of practice.

“Uncertainty” is the term that still best describes Trump’s future presidency, according to the European External Action Service (EEAS), which acts as the EU’s foreign affairs ministry and maintains a network of delegations and embassies throughout the world. This uncertainty is twofold: it pertains both to Trump’s style of governance and the actual actions that he will attempt to undertake. Nonetheless, there are some indications that can help the heavy guesswork that is going on in Brussels.

Firstly, there are strong doubts as to whether or not Trump will actually follow up on the many radical statements that he made while campaigning. Based on the amount of backtracking that Trump has already done (on Obamacare and gay marriage, for example), the consensus is that President Trump will be significantly different from candidate Trump. Yet, rumours surrounding the appointment of his secretary of defense – possibly former New York Mayor Rudy Giuliani – and other key positions within his cabinet nourish anxiety as to the nature of a Trump administration.

A report in the New York Times alleges that foreign authorities have experienced difficulty reaching out to the President-elect’s office. Additionally, the replacement of New Jersey Governor Chris Christie by Vice President-elect Mike Pence as the head of Trump’s transition team justifies the fear of a relatively unprofessional and unprepared Trump team coming into the White House next January.

Trump’s decades in the spotlight do provide some insights into his temperament, and EU officials expect his foreign relation practices to be an abrupt break from Obama’s approach. The general expectation is that Trump will be less well versed in working through multilateral institutions, and will instead prefer bilateral talks and ad hoc arrangements. This does not align with EU interests, and may push European interests into the background as President Trump is more likely to circumvent European institutions.

Secondly, beyond Trump’s style of leadership, few concrete details regarding Trump’s future policies and legislative plans have been released to the public. In addition, as vague as Trump’s policies are, his ability to implement them with the sole power of the presidential office remains an important question. Regarding free trade deals, which seemed to be in jeopardy given Trump’s explicit protectionist rhetoric while campaigning, it is still uncertain that Trump will have the legal means to cancel them, in NAFTA’s case, or block their ratification, in the TPP’s case, without the support of Congress.

Trump has also not mentioned how he intends to handle the currently stalled TTIP negotiations, but EU officials are not optimistic about the treaty’s future, which already looked grim prior to the election. Similarly, important negotiations persist regarding the future of the 2015 Paris Agreement on climate change and of NATO. Concerning NATO, Trump’s relations with Russia and Putin will be intensely scrutinized by European leaders. Despite extensive press coverage about Trump’s links to Russia and his public praise of Putin, it is not yet possible to know how this new Russo-American relationship will play out.

The US’ relations with Russia do not only pertain to NATO and European military security, but are also of paramount importance to the EU’s energy security. In 2014, Russia accounted for 29.4% of the EU’s total crude oil imports and 37.5% of its total natural gas imports. The EU has been continuously importing over half of its energy in recent years, and that share is on the rise. Significant amounts of energy are or have been imported from the Middle East, from Libya, Iraq, Qatar and Saudi Arabia in particular, a region in turmoil where Russia is a key player. President Trump may bring further instability to by pulling out the American presence in the region, which would be in line with his isolationist discourse.

Even though Trump’s election leaves EU officials worried, it could open up opportunities for the EU to assert itself on the international scene and push its interests forward.If we suppose that Canada’s relations with the US will be more complex and tense under a Trump Presidency, we could assume that Canada would seek to re-balance its foreign relations and tighten its relationship with the EU. This would bode well for the future of the Strategic Partnership Agreement (SPA) and the Comprehensive Economic and Trade Agreement (CETA). Both agreements were signed on October 30th, but still require parliamentary approval before being implemented. Still, both agreements could be used as building blocks for a closer Canadian-EU relationship.

If the US steps back from its role as the global leader in climate change talks, counter-terrorism, and generally within the world order, a void may be created that the EU could step in to. Given the EU’s recent struggles to handle the refugee crisis, which highlighted the inability of the 28 member states to act together in a coordinated and decisive manner, it would be surprising to see the EU taking initiative in the Middle East or other international matters. The apathy and apparent disinterest shown by the majority of EU member states in response to international events does not indicate that the EU would seek to increase its international “hard power.” For example, France saw a lack of support from its European allies during its interventions in Mali and Central Africa, with only a limited amount of financial funding and logistical support provided by Germany and Italy.

However, if EU member states do come together within the EU and EEAS, they may be able to establish the EU as a key player in the Middle East alongside Russia, and begin to assert themselves as the inheritors of the US’ long-held title as “leader of the free world.” Such a move would put likely put the EU at odds with other nations seeking to wrest some degree of power and influence from the US, notably Russia and China.

President Trump is a fearful figure for the EU, as his protectionism, isolationism and general rhetoric are contrary to the EU’s core values and may endanger some of its most important international initiatives. However, a Trump presidency could also offer the EU the opportunity to establish its leadership in some areas of expertise on the international stage, such as climate change or trade negotiations, or to even expand its role into areas like the Middle East. If this is the case, the EU and the EEAS could benefit on the international stage from a Trump presidency.