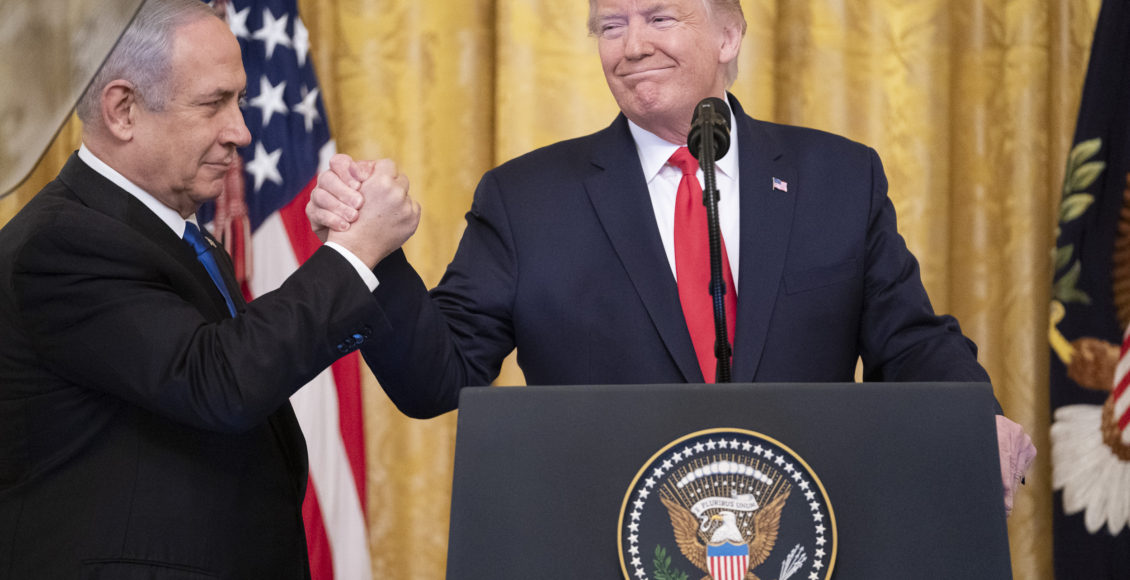 On January 28, 2020, Donald Trump released his long-awaited vision for peace between Israel and Palestine. Overall, it appears to favour Israel’s demands, denying Palestinians most of what they fought for in the past: the removal of Jewish settlements on the West Bank, recognition of East Jerusalem as the Palestinian capital, and control over their territory as any sovereign state would enjoy. Instead, the plan calls for the creation of a demilitarized Palestinian state, excluding Jewish settlements in occupied territories of the West Bank that will remain under Israeli security control. While the plan was quickly and enthusiastically endorsed by Israel’s Prime Minister, Benjamin Netanyahu, it was simultaneously rejected by both the Palestinian Authority and Hamas along with the Arab League. While some have suggested that the deal could provide Palestinians with better conditions and modify the contours of the conflict by giving them more bargaining power, ultimately, the deal’s one-sidedness precludes it from offering any hope for lasting peace, equality, or justice.

A flawed and unachievable peace vision?

For over a century, Western powers—formerly led by Britain and now by the United States—have attempted to shape policies and political outcomes in the Middle East. Undeniably, external intervention plays a major role in the perpetuation of conflict throughout the region. However, when we consider the history of Western involvement in MENA, suggesting more foreign involvement and western advice as an antidote becomes even more imperialistic and dangerous. Ultimately, the Trump administration’s unilateral development of the plan illustrates the failure of American foreign policy professionals to understand how their involvement in this conflict is problematic at best and threatening at worst.

Perhaps the biggest flaw of this deal is its purported intention to pacify Israeli-Palestinian relations without fully involving Palestine in its implementation or meeting their minimum conditions. Undoubtedly, both Palestinians and Israelis must be central and equal partners in the regional peace process rather than bystanders, as decisions affecting their lives and identities are made on their behalf. Ultimately, it would be a beginner’s mistake to think that any monumental deal can be reached when one side isn’t part of the negotiations. Thus, it is reasonable to argue that a peace deal created solely by President Trump’s administration or Prime Minister Benjamin Netanyahu is bound to fail, especially if considered the “Ultimate Deal” for Israeli-Palestinian peace. In the end, any path for peace must be based on principles of justice and equality for all, and not explicit favouritism demonstrated by leaders’ personal views and peace negotiations.

A possible intermediate step towards peace?

Beyond these flaws, however, some have highlighted how the plan could paradoxically re-shape the conflict or even re-open the dialogue between the different stakeholders if framed as an intermediate step towards peace rather than a final and “ultimate” deal. Today, Palestinians have only a limited ability to stand up to an American-Israeli partnership. However, if implemented, the plan could enable the creation of a Palestinian state with more control over internal security than before. This could significantly change the conversation surrounding the conflict, potentially offering prospect for advancement. For Micah Goodman, research fellow at the Shalom Hartman Institute in Jerusalem, this makes the deal worth considering if “we can stop pretending that the United States’ plan will end the conflict, and admit that it might be better at transforming its character.” By looking at the deal through this lens—as a temporary rather than “ultimate” deal—it undoubtedly has a greater chance of success, and both sides might have an incentive to consider it.

According to this argument, through its potential to reconfigure the conflict, this plan could reduce Israel’s control over Palestinian territories without compromising Israeli security. Similarly, Palestinians could consider this plan as an intermediate step without necessarily abandoning their long-term aspirations. Arguably, only by reconfiguring the issue (which has remained in a deadlock for years), can new opportunities to shrink and ultimately resolve the conflict arise.

Whether or not such a rearrangement is achievable is questionable. Palestinians have consistently refused to renounce core aspects of their beliefs and national identity in exchange for more independence. In this case specifically, the promise for more Palestinian independence and sovereignty could easily be seen as untrustworthy. Under the plan’s conditions, Palestine would remain under Israeli control and Gaza would be expected to fully demilitarize, taking away any real hope for meaningful Palestinian sovereignty. While Palestinians would be given the power to govern themselves, they would not be given the capacity to threaten Israel which, according to the plan, “necessarily entails the limitations of certain sovereign powers in the Palestinian areas.” On the other hand, the plan sets a double standard, as it claims that “it is unrealistic to ask the State of Israel to make security compromises that could endanger the lives of its citizens,” illustrating once again how skewed this proposal truly is.

Initial responses following the plan’s release prove this is the case. The Palestinian Authority, led by President Mahmoud Abbas, immediately rejected the proposal and, in a rare show of unity, Hamas followed suit. On the other side, Israel’s President Netanyahu not only endorsed the proposal, but also informed reporters that Israel will claim sovereignty over parts of the West Bank through a unilateral annexation within the framework of the US proposal. Thus, to date, the only major outcome of the plan has been to legitimize Israel’s annexation of West Bank territory.

Overall, not only has the plan failed to open up cooperative negotiations between Israeli and Palestinian leaders, but it has also dangerously escalated violence in the West Bank, prompting the Israel Defence Forces to send additional troops to the area. Ultimately, the idea that the plan would give Palestinians more sovereignty and bargaining power appears to be even more misguided in light of recent developments that show the extent to which Trump’s vision has only served Netanyahu’s immediate interests. Thus, Trump’s promise to bring fresh thinking to the decades-old conflict has failed remarkably and his Middle East peace plan has not delivered any real hope.

Featured Image “President Trump Unveils a Plan for a Comprehensive Peace Agreement Between Israel and the Palestinians” Official White House Photo by Shealah Craighead is licensed under Public Domain Mark 1.0.