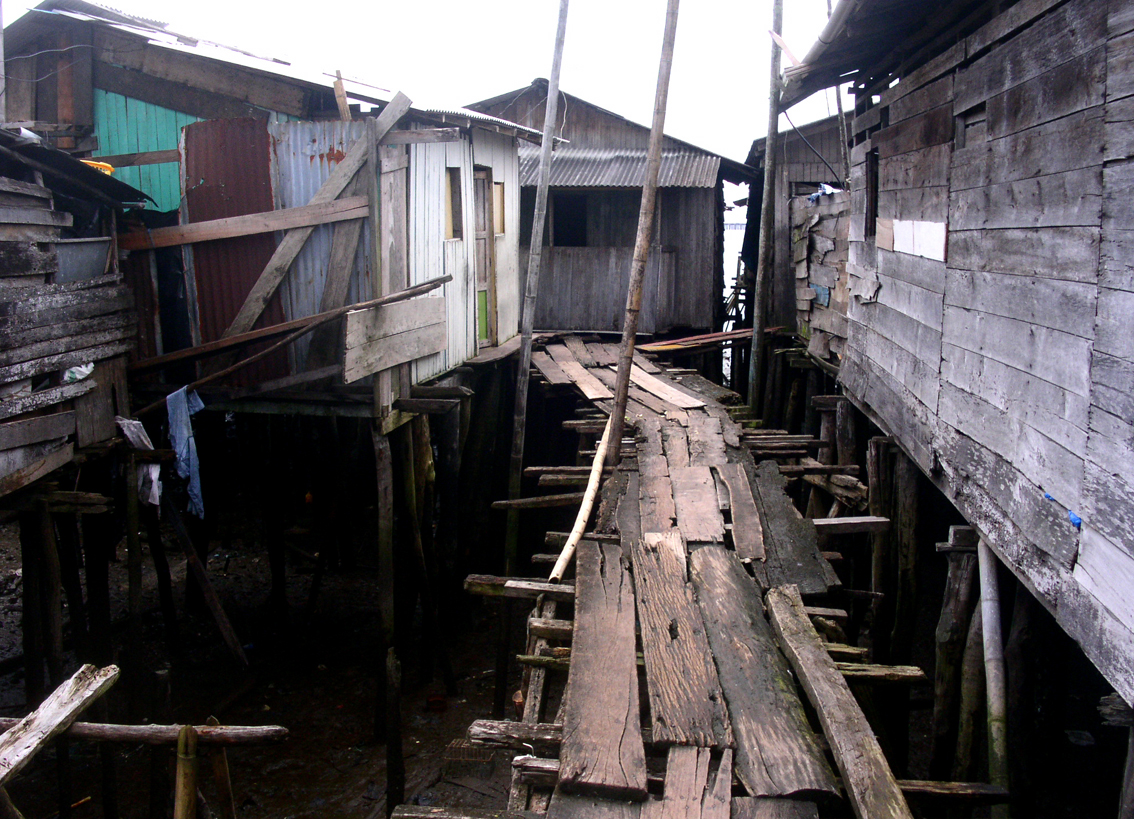 On October 5, 2017, police allegedly assassinated at least 8 people and left at least 20 wounded in a massacre in the forest of El Tandil in Tumaco, a port city next to the Pacific Ocean in Colombia. Victims, many of whom were coca planters, were protesting because they were not getting any subsidies or guarantees from the government to have their basic needs ensured. The government must take responsibility for allowing the massacre to happen, consolidate a strategy to have more control over police forces, guarantee effective subsidies for peasants, and prevent more deaths from taking place.

According to the government and its public forces, the massacre happened because of 5 cylinder bombs thrown by the FARC dissidents, who were purportedly pressuring coca planters to protest. After throwing the explosives, the FARC dissidents then supposedly attacked civilians and the Public Force with rifles and machine guns. This outrageous version turned out to be false according to witness testimonies from both coca planters and soldiers as well as video footage of the attacks that suggests that police officers, not FARC dissidents, were the ones shooting. Some planters did claim that they were pressured by illegal armed groups in the region to protest, claiming that “they would kill 2 members of their family if they didn’t confront the forced eradication,” according to a report by the Communitarian Council of Alto Mira and Florera, a zone within Tumaco. Yet, even if the allegations that  illegal armed groups pressured peasants to protest turn out to be true, it would make no sense for the massacre itself to have been caused by FARC explosives. No police officials or army soldiers were wounded and no traces of explosives have been found. Indeed, coke planters claim that there were attempts being made to mediate with the police officers when the shooting began. Some soldiers belonging to the Colombian army did take care of the wounded, however. 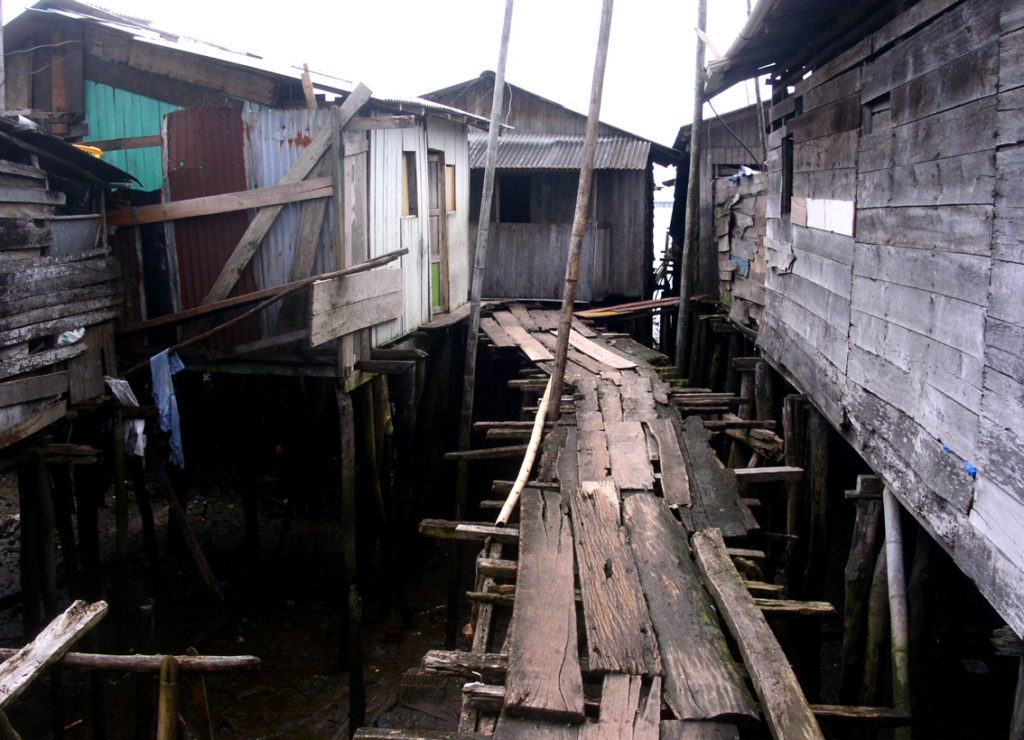 Historically, coke planters in Tumaco have relied on illicit plantations for survival. After all, they claim that they have not been offered alternatives to plant other types of products by the Government. In Nariño, the department where Tumaco is, there are 40 000 families that have small coke producers within them, many of them being indigenous, Afro-descendants, and peasants, who rely on coke production to sustain themselves. Tumaco is the city that has the most coke plantation hectares in Colombia, with around 20 000  hectares of coke as of 2017, four times more than the nearly 5 100 hectares of coke it had in 2012. Nationally, there are 150 000 hectares of coke plantations as of 2017. It is important to note that coca itself is not damaging to health. Cocaine is the drug that has devastatingly harmful effects on many consumers, but this drug gets created further down the road once coke is mixed with other chemicals in laboratories. That being said, many of the coke plants extracted from plantations are directed to laboratories, some of which are in Tumaco.

The conflict in Tumaco is taking place in the context of what is supposed to be a Colombia in a “post-conflict” phase. On November 24, 2016, the government and the FARC-EP signed an agreement meant to put an end to the country’s 52-year old armed conflict. One of the sections of the agreement was entitled “Solution to the Problem of Illicit Drugs”. On page 107 of the Agreement, it is explicitly stated that “the Government must generate and guarantee dignified conditions of life and of work for well-being and good living” and that “the Government must execute a plan of immediate attention and the implementation of the process of conjunctive, participative and concerted construction of municipal and communitarian integral plans  of substitution and alternative development.” Given what was agreed upon in the Agreement, the Government developed two parallel programs. The first is ‘Programs of Development with a Territorial Focus’, led by Rafael Pardo, the high advisor for the Post-Conflict, Human Rights and Security. This program was meant to allow the communities themselves to imagine and renew their territories.

The second program, however, was a program of forced eradication of illicit cultivations, which was to be orchestrated by the Public Forces, comprised of the army and police officers. It is as if the government was saying to the coke planters: “if you do not comply with the voluntary substitution program, we will be forced to eradicate your illicit cultivations.” However, since the signing of the Agreement, the number of coke plantations has not decreased, and a fervent opposition led by ex-President and current senator Álvaro Uribe Vélez is doing everything it can to ensure that the implementation of the Peace Agreement that the government signed with the FARC fails. Furthermore, the Peace Agreement has had a controversial reception in the country – as was made visible when the original Agreement was rejected by a narrow majority in a Plebiscite on October 2, 2017. While a new Agreement was released that modified various points of the original Agreement, many sectors in the country are still not satisfied with the new Agreement. All these recent facts likely give the government more pressure when it comes to removing illicit cultivations. The problem however is that the voluntary substitution program is not generating trust in coke planters, who are not being offered any alternatives that can allow them to survive and maintain their families – which they had with coke plantations.

Coke planters started mistrusting the government because of the delay in the schedule of implementation of the Integral Program of Substitution of Cultivations (PNIS). To make matters worse, the office of the substitution of cultivations of the High Advisory for the Post-Conflict (led by Rafael Pardo), which is meant to listen to the communities, only has 4 functionaries in the Nariño department, and while the Nariño governance has provided 15 officials, the personnel and budget offered by the government has been insufficient. Yet the PNIS managed to sign 23 collective agreements with communities that want to substitute illicit cultivations. Meanwhile, the government sent 3000 army members to eradicate illicit cultivations. Indeed, the Minister of Defence did not respect the collective agreements signed between the communities and the PNIS officials and just went on with the implementation of forced removal of illicit cultivations. This move further gives the impression that the government is more concerned with the removal of the coke plantations itself than with providing decent living alternatives to its own citizens, despite what they agreed to in the Peace Agreement. 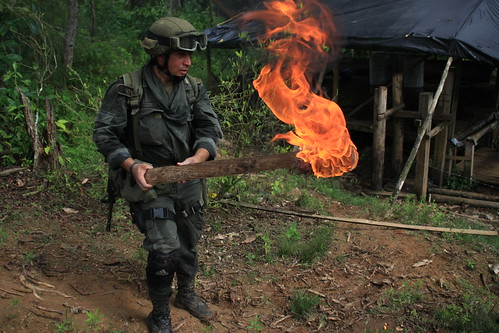 A guard after burning a coca laboratory near Tumaco, Colombia, in the southwest state of Nariño – June 8, 2008. (AP Photo/William Fernando Martinez)

Tensions between police officers and locals escalated on April 12, 2017, when peasants held 11 police officers, who were forcefully cutting their plantations, hostage for 26 hours. The peasants took the weapons of the officers, which up to this day, have not appeared. 6 months later, the government failed to find a solution to the crisis in Tumaco. Indeed, the problems intensified on October 5, when the police supposedly massacred civilians in the municipality. For a country that is purportedly in a “Post-Conflict” phase, it is inexcusable to have police officers, who are public government officials, allegedly assassinating civilians, particularly when the Peace Agreement already explicitly highlighted the importance of working with the communities, not against. To make matters worse, police officers shot a humanitarian mission that included a commission of international organizations, NGOs and journalists three days after the Tumaco massacre. Peasants told the humanitarians that the police officers were responsible for the massacre. When the humanitarians went to see the officers, the latter shot them.

The government needs to stop falsely accusing the FARC dissidents for the massacre, and assume responsibility for the Tumaco fiasco. Furthermore, they have to merge the two programs that were developed to remove illicit cultivations. It makes no sense to have a poorly funded program with only 4 functionaries that is meant to listen to the communities running parallel to and not communicating with a well-funded program to forcefully remove coke plantations. Finally, more resources need to be directed towards subsidies for peasants. Protesting is a legitimate action for the peasants to take given that their sole means of survival is being destroyed, with no alternative offered. This kind of governmental negligence and inability to respect the dignity of human lives is precisely what led to the beginning of the Armed Conflict and to its perpetuation for more than 50 years. After all, the many guerrillas that emerged in the ’60s – many of which then went on to commit crimes against humanity in later years given the dehumanizing effects of war – were precisely a response against the government’s disastrous negligence towards, and violence against, marginalized communities.

After four police officers were suspended, being held accountable for the shootings in Tumaco, President Juan Manuel Santos announced on October 19, 2017 the creation of a Force of Joint Task, led by a General, and a plan of integral intervention for the Nariño department. This Joint Task will have 4000 members of the Military Forces and 2500 of police officers, for a total of 6500.  President Santos, who ironically won the Nobel Peace Prize last year, either does not seem to or does not want to understand that the main problem in Tumaco lies in the government’s failure to build rapport with the communities. Sending more police officers is probably the worst decision he can make right now when police officers were the alleged perpetrators of the Tumaco massacre. Furthermore, he still claims that “they have not been able to reach a conclusion” when it comes to clarifying what exactly happened in Tumaco despite witness testimonies and video footage.

It is up to the government to take the necessary precautions to prevent what could turn into another civil war from erupting. A very thorough Peace Agreement has already been written and signed. It must now be implemented with the utmost care so that marginalized communities can finally have new alternatives in a country in which, hopefully, peace can prevail.