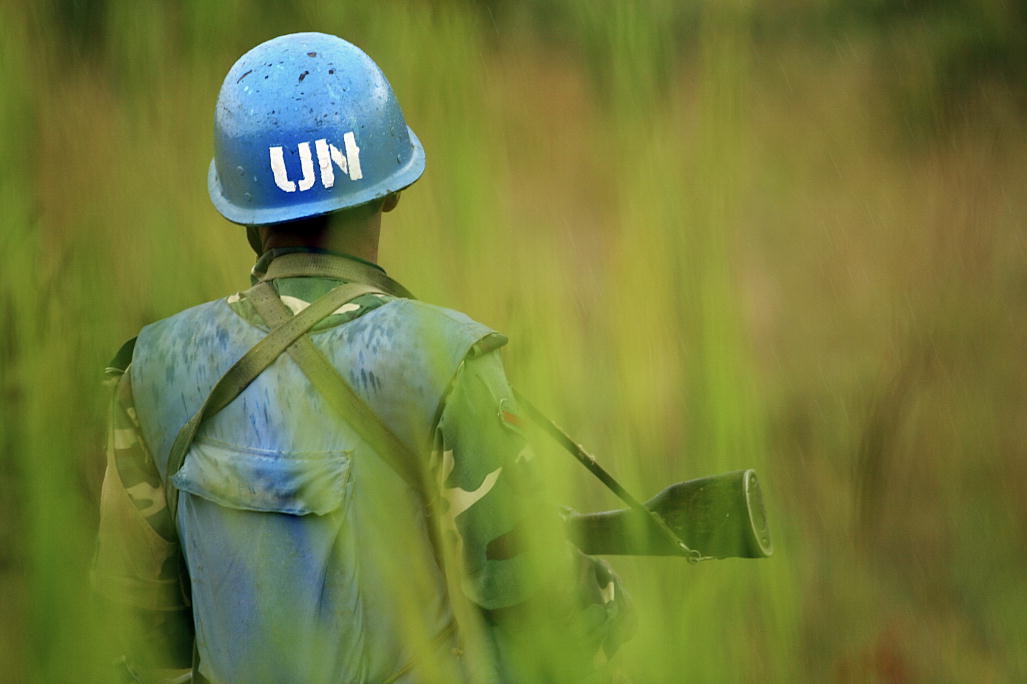 A United Nations Organization Mission in the Democratic Republic of the Congo (MONUC) peacekeeper is taking part in a training exercise, near Bunia in Ituri. 19/Oct/2006. UN Photo/Martine Perret. www.unmultimedia.org/photo/
Share

The International Commission on Intervention and State Sovereignty first coined the doctrine of Responsibility to Protect (R2P) in 2001, following the failures to intervene in the atrocities of the Rwandan genocide and the Srebrenica massacre. Such galling failures laid bare the need for the international community to shift the conception of sovereignty from an absolute right of states to their responsibility to protect their nationals. Under R2P, peacekeeping operations have been deployed in order to assist in stabilizing conflicts in war-ravaged countries and help them transition to peace.

In the original report published by the ICISS on R2P, rape is stipulated as a cause of intervention if employed as a form of ethnic cleansing. Given the intervention of the International Courts in conflicts where sexual violence was considered a crime against humanity, such as Rwanda and former Yugoslavia, the applicability of sexual violence to the principles of R2P has been affirmed.

However, peacekeeping forces have committed acts of sexual violence in virtually every country they have operated in. Lieutenant-General Roméo Dallaire, former Senator, commander of the U.N. peacekeeping force in Rwanda during the 1994 genocide, has “said there is a “culture of silence” and near-impunity for UN peacekeepers in their missions abroad, contributing to the growing scandal over sexual abuse and exploitation by the blue-beret troops.” In 2000, the Security Council issued its first resolution on women, peace and security: resolution 1325. It centered three principles: women participation in decision-making processes, gender mainstreaming, and protection of women from conflict-related sexual and gender-based violence. Thus, within the UNSC and R2P framework, prevention and protection of women from sexual violence is intrinsic to its law. As the R2P agenda emphasizes protection from sexual violence, the lack of investment in preventing it by the UNSC is troubling, particularly where U.N. peacekeeping forces are concerned.

As sexual exploitation and abuse violates the core tenets of the international doctrine of Responsibility to Protect (R2P), which peacekeeping operations espouse, how can the United Nations in general, and U.N. peacekeepers in particular, maintain moral authority and command international support when egregious acts of sexual violence are perpetrated against populations they are sent to protect?

Both MONUSCO and MINUSCA are operating within the backdrop of instability and a weak state. As a result of war, mismanagement, neglect and poor governance, the law enforcement and judicial systems in Congo and the CAR have been incredibly weakened. Moreover, even when crimes are prosecuted, few national perpetrators of SEA are ever disciplined, with members of the military often being shielded from punishment. The structural inadequacies of weak judicial systems and assumptions that crimes will go unpunished, create an environment of impunity which may seep into the psyche of peacekeepers. Furthermore, insufficient enforcement mechanisms within the U.N. also strengthens the impunity peacekeepers operate under. The culture from which peacekeepers come from also determine the likelihood of perpetuating SEA. For instance, the domestic laws regarding sexual violence, rape, domestic violence, and abuse in troop-contributing countries (TCCs) can reveal the norms peacekeepers are externalizing while operating in the DRC and the CAR. Four of the highest contributors for MONUSCO and MINUSCA are Pakistan, India, Bangladesh, and Egypt. In assessing what these countries have in common, all four aforementioned TCCs scored poorly on the Gender Inequality Index (2014), with Pakistan scoring the worst. Thus, militarized masculinities, a local context of impunity, TCC home cultures that normalize SEA, and the institutional failures of the U.N. can account for the high rates of SEA by MONUSCO and MINUSCA.

Since the early 1990s, the prevalence of peacekeeping sexual misconduct has been known both to the U.N. and other international organizations. In responses to the allegations of peacekeeping sexual abuse, the U.N. initially developed ad hoc strategies at the individual mission level, subsequently followed by more coordinated responses by the Department of Peacekeeping Operations (DPKO) and the Secretary-General; which were supplemented by the policies of individual missions. From 1997 onwards, the U.N. produced numerous codes of conduct, general guidelines and training manuals to prevent the alleged SEA. These efforts, however, aimed to provide a ‘quick fix’ for the alleged problems, offering no concrete disciplinary action for the peacekeepers abusing.

Through greater media documentation in the early to mid-2000s, the UN has faced increasing pressure from civil society and the international community to respond to peacekeeping sexual exploitation and abuse. After the 2002 UNHCHR/SC-UK report, UN Secretary General Kofi Annan released the “Bulletin on Special Measures for Protection from Sexual Exploitation and Abuse”, otherwise known as the “Zero Tolerance Policy.” The policy explicitly ‘strongly discourages’ sexual relationships between peacekeepers and local women, bans prostitution—the solicitation of prostitutes, withholding of goods or services until demands for sex are met, and the exchange of money or other items for sex or sexual favours—and prohibits engaging in sex with minors under the age of eighteen.

Despite the policy efforts of the U.N., survivors of sexual violence continue to face increasing barriers to reporting in peacekeeping situations. A lack of faith in the system, fear of stigma or retaliation, and indefinite investigation procedures deter survivors from pursuing justice. The structural and institutional issues often constrain the U.N.’s effectiveness in addressing peacekeeping SEA.

As the last thousands of peacekeepers leave Haiti under what was known as the UN Stabilization Mission in Haiti (MINUSTAH), the consequences of peacekeeping SEA and effectiveness of the responses by the U.N. can be observed. While the 13-year mission has been credited for bolstering Haiti’s democratic institutions, it has also been mired in controversy. MINUSTAH is responsible for causing a cholera epidemic, resulting in the deaths of over 10,000 Haitians since 2010, and at least 134 cases of sexual abuse scandals have been reported. It took the U.N. six years to acknowledge its role in the cholera outbreak, and despite former Secretary-General, Ban Ki-moon’s commitment to a “new set of U.N. actions” to respond to the crisis, the U.N. continues to reject victim’s legal claims by citing immunity. The lack of accountability paired with the U.N.’s impunity created the same sets of conditions for survivors coming forward about being raped by MINUSTAH peacekeepers: confronting the same type of repudiation faced by the cholera victims and treated as though they do not exist. Their rapists were rarely prosecuted; simply sent home instead.

As the Zero Tolerance Policy is only legally binding on U.N. staff, contingent members are not bound by the same standards. Even if allegations are substantiated following a lengthy investigation, the perpetrator cannot be punished directly by the U.N. The most the U.N. can do is repatriate the peacekeeper and apply diplomatic pressure for the prosecution of the peacekeeper. Thus, enforcement is ultimately up to the domestic jurisdiction of the troop-contributing country. Many of the largest TCCs also do a poor job on enforcing domestic penal of SEA crimes. Although, no longer in the jurisdiction of the U.N., the U.N. does an equally poor job in following up on whether prosecution of the individual has been pursued, or pardoned the violator. Because of the top-down approach of the Zero-Tolerance policy, the established norms may not have been internalized by TCCs or peacekeepers on the ground.

Without concerted policies, official investigations with transparent reporting and legal remedies, the R2P doctrine runs the grave risk of losing credibility as a protection implement. More meaningful legal protections are necessary to safeguard vulnerable populations from exploitation by the very soldiers meant to protect them.