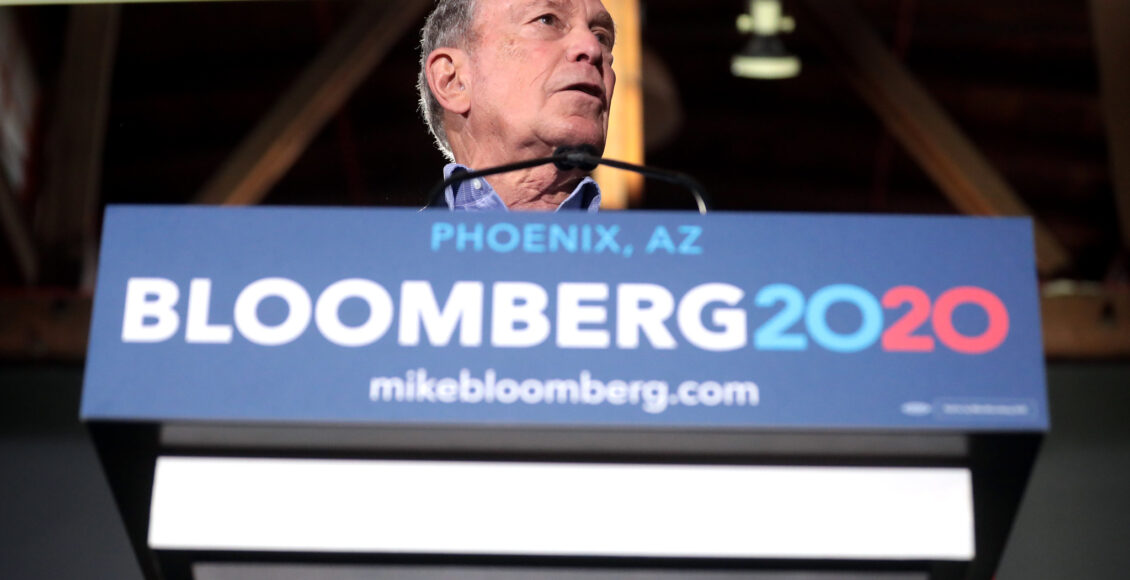 Michael Bloomberg suspended his campaign on March 4, 2020 following a disappointing result on Super Tuesday. He spent 500 million USD on a social media-oriented, 14-week campaign—more than what Hillary Clinton and Donald Trump combined spent in the entirety of the 2016 campaign. The nature and structure of Bloomberg’s expensive campaign represent many of the important changes to the political process, particularly those pertaining to the role of the internet and social media. Though his campaign proved unsuccessful, the precedent established by the Bloomberg campaign and its possible future impacts are worth discussing.

The natural reaction to Michael Bloomberg’s bizarre Instagram direct message (“DM”) messages plastered en masse across your feed was one likely filled with confusion and humour. To have the former mayor of New York and a frontrunner Democratic candidate purchase advertisements from meme page giants such as Grape Juice Boys and Sonny Side Up was an unprecedented move, though representative of the political culture of the era. Social media has been a major factor in the 2020 American elections as well as an increasingly prevalent and driving force across political movements, perhaps even surpassing its role in the 2016 elections.

Even media consumers who are less concerned with politics are effectively, and more so than before, forced to view and oftentimes interact with political content. Political memes are not necessarily new phenomena—much like any other aspect of our social lives beyond social media, our political opinions can be embedded in our everyday activities. Political memes were once exclusively created by the general populace — take for example, in today’s terms, the Bernie Sanders meme that originated from a screen capture of a typical campaign video designed to be created into a meme — “I am once again asking you to [insert caption here].” Sanders did not pay meme pages to circulate this and the meme itself was a result of his notoriety in the Democratic campaign. For Michael Bloomberg, who entered the Democratic race quite late in comparison to his competitors, memes became a way for him to popularise himself among young voters, a generation who may not relate to his mayoral reign in New York from 2002 to 2013, for which he is often celebrated.

To achieve this, the Bloomberg campaign cooperated with a new company called Meme 2020, a directive founded by Mike Purzycki, the lead director of influencer powerhouse Jerry Media. Bloomberg’s team of social media directors were focused on capitalising on the current, popularised trends of ironic humour on the internet in an effort to connect Bloomberg to younger audiences. Many of Bloomberg’s Instagram “DM” memes are categorised as self-mockery and seem to play into the “OK boomer” narrative, wherein he makes fun of himself for being old and out of touch, and asks the meme page owners to make him seem “cool and funny”. The Bloomberg 2020 verified Twitter account has tweeted bizarre messages and photos that confuse and entertain its followers in an effort to encourage individuals to retweet and share them.

Test your political knowledge:
SPOT THE MEATBALL THAT LOOKS LIKE MIKE. pic.twitter.com/CkzdgwpzdI

Bloomberg’s team was dedicated to monitoring and understanding what was considered trendy among young voters. One of the foremost differences between the 2020 election and the 2016 election is the extent to which campaigns have catered to the younger generations, particularly Generation Z, which is composed of people born from 1997 to 2012. Tufts University’s biennial Democracy Counts report revealed that campus voting rates have more than doubled in four years, from 19.3% turnout in the 2014 midterms to 40.3% in the 2019 midterms. 2020 marks the first presidential election in which this age group will be able to vote, granting them the potential to drive the largest turnout of young voters ever. Gen Z and Millennials are projected to make up 37% of voters in the 2020 general election according to Pew Research Centre and they are largely split along party lines. Although the differences between Gen Z and Millennial voters are difficult to accurately qualify, in order to attract voters from both generations, campaign executives have had to alter the methods through which they conduct outreach, such as by embarking on a “meme campaign”. Sabrina Singh, a senior national spokesperson for the Bloomberg campaign stated that “while a meme strategy may be new to presidential politics, we’re betting it will be an effective component to reach people where they are and compete with President Trump’s powerful digital operation.”

Business Insider has dubbed Bloomberg’s campaign a “strategy of oversaturation”; it is similar to that of Trump’s reelection antics in 2019 when the current president spent $20 million on filling Facebook user’s timelines with misleading advertisements, or “fake news” as it is infamously known. Being the 7th richest person in the U.S., Bloomberg’s immense wealth is undoubtedly contributing to this apparent “oversaturation” since it allows him to spend enormous amounts of money to capitalise on what content succeeds best on which social media platforms. Bloomberg’s net worth is ten times greater than Donald Trump’s during the 2016 election, as Bloomberg is reportedly worth $62 billion while Trump was worth between $5 and $6 billion. This wealth allowed Bloomberg to spend half a billion USD on social media campaigns, the most expensive self-funded campaign in U.S. history.

Bloomberg’s unprecedented use of meme culture to popularise his campaign was aided by the various social media platforms he had at his disposal. While Instagram was widely used to distribute and respond to memes, Twitter also played an important role. Twitter has become the medium for political conversation. In fact, the results from three Democratic caucuses (Iowa, New Hampshire, and Nevada) were first announced by the candidates on Twitter. Voters overwhelmingly engage in online discussion as “replies” to the tweets from candidates, journalists, campaign staffers, and even celebrities. Through Twitter, verified news accounts are able to deliver succinct headlines about current events to millions of people every day, reaching both Americans as well as people all over the world. The use of Twitter by political candidates has been largely popularised by the incumbent president, Donald Trump who has resorted to Twitter as his primary form of communicating with the public.

Despite the suspension of Bloomberg’s campaign, the rise in the importance of social media signals that “meme culture” will continue to consolidate itself in our political systems. The era of politicised social media is fundamentally altering our society and government. “The Bloomberg campaign is destroying norms that we will never get back,” said Emerson Brooking at the Atlantic Council’s Digital Forensic Research Lab, which studies disinformation online. “[The campaign] has revealed the vulnerabilities that still exist in our social media platforms even after major reforms.” The political salience of social media is undoubtedly influencing the ways in which we digest and interpret critical information. In a federal election that will determine the course of the next 4 years, not only within America but in the greater global context, it is worth considering the consequences of social media and “humorous” content, such as memes, have on the democratic process.

The featured image, “Michael Bloomberg” by Gage Skidmore, is licensed under CC BY-SA 2.0. No changes made.