Union Dues – Breach of Rights or a Necessity? 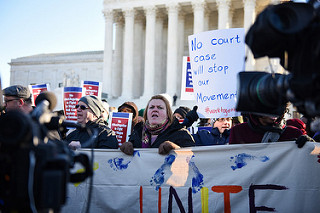 States (SCOTUS), a case where the outcome could have detrimental effects for the future of the already waning union movement in the United States. The case I’m referring to is Friedrichs v. California Teachers Association.

The case was agreed to be heard in front of the Court back in June, brought forward by leading plaintiff Orange County teacher Rebecca Friedrichs along with nine other Califronia teachers and the Christian Educators Association. The case essentially brings up the question if “fair share fees” or “agency fees” for unions breech First Amendment Rights under the US constitution.

Currently in California, teachers cannot be forced to join the California Teachers Association (CTA) as that would violate First Amendment rights as previously ruled by SCOTUS. However, teachers who decline union membership must still pay a fee (agency or fair share fee) to cover the cost of “collective bargaining, contract administration, and grievance adjustment purposes.” This was the ruling in 1977 made unanimously by SCOTUS in Abood v. Detroit Board of Education. The plaintiffs wish to overturn this ruling arguing that they do not want to be paying into causes they may not support. They are being represented by lawyer Michael Carvin, a lawyer for the Conservative Center for Individual Rights and the lawyer who previously brought a challenge to Obamacre to the Supreme Court.

According to Carvin in his oral arguments to the Supreme Court on Monday a public-employee union is purely political and it “advocates an ideological viewpoint” that his clients “do not approve of.” Everything a union does, he argues, is a matter of public concern. Th 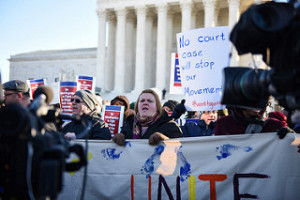 e arguably most conservative justice on the Supreme Court, Antonin Scalia seemed to agree with him, not surprisingly. His words almost echoed exactly those of Carvin saying: “The problem is that everything that is collectively bargained with the government is within the political sphere, almost by definition.”

In counter to this “everything is political argument” it is extremely important to note that not everything that a union deals with is political and can actually at times be quite mundane. This includes things like: breaks, mileage reimbursement, and professional development. Carvin and conservative justices Scalia, Kennedy and Samuel Alito conveniently leave this detail out even though this had been previously cemented in previous cases concerning collective bargaining saying that it was not a constitutional issue. Carvin went as far as even framing fire drills as sneaky union politics! “They do safety training. Can you think of something that’s more a matter of public concern, that’s more of an ideological point, that’s more important?”

The idea behind the opposing side is simple. The union is mandated to represent all employees whether they are members or not. Not paying into the union and free-riding would be detrimental and would severely lessen a union’s ability to represent their membership. It seems pretty common sense to me. If this case is won by the plaintiff, the union in question and possibly other public sector unions will lose a great deal of leverage and could potentially wither away among conservative attackers into nothing, especially since many current union members may decide to stop paying dues. The cost difference between a full membership and a fair-share fee may be minor but the difference of cost between a full membership and zero cost from a free ride isn’t.

If the CTA loses this case then California could become a right-to-work state and similar consequences could be coming to it like in Wisconsin. In 2011, Gov. Scott Walker rammed through anti-union right-to-work legislation denying bargaining rights to workers. That same year membership in the largest public union in the state, the American Federation of State, County and Municipal Employees declined from 62,818 to 28,745.

To be blunt, this case seems like a vehicle to destroy teacher unions and potentially public sector unions. The plaintiff side is being backed by powerful and rich people and they will likely be hard to defeat. The decision will only be rendered months from now in June. This means that American unions still have time to organize and to stand up and to protect their hard-fought rights and livelihoods. This is a battle of extreme importance, one of seemingly David vs. Goliath proportions masked as a simple breech of individual rights on Friedrichs’ side. We know that this is not the case and hopefully the judges will see through these arguments as well.