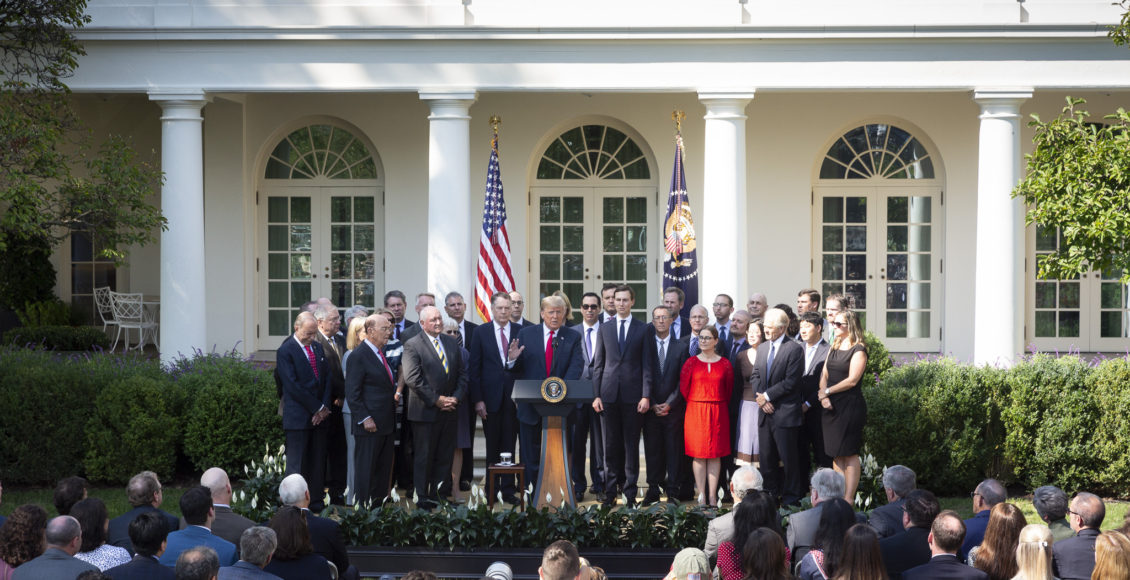 Canada, the United States of America and Mexico have reached an agreement after months of negotiation on a new trade agreement called the United States-Mexico-Canada Agreement (USMCA). When President Donald Trump began his tenure in the White House in 2017, he set about renegotiating the original North American Free Trade Agreement (NAFTA) which had been in place for more than twenty years. Over the past two decades, it has been highly debated; being blamed for job losses and hindering economic growth. The Canadian government maintains that this agreement will “support well-paying middle-class jobs for Canadians.” This trade agreement looks very similar to the previous trade agreement, NAFTA, with a few notable differences. There have been some major policy changes regarding intellectual property protections, labour and environmental standards, the Canadian dairy market and an increase in the country of origin rules for automobiles. It also represents a possible shift from free trade towards something more managed.

Key Changes in the US-Mexico-Canada Agreement

USMCA has some notable departures from the previous agreement. For automobiles, the per cent of components manufactured in the US, Canada, or Mexico to qualify for zero tariffs has been bumped up to 75 per cent. Previously, this country-of-origin rule only allowed 62.5 per cent to qualify under NAFTA.  The new agreement was spearheaded by the Trump administration in order to bring back American auto industry jobs, as Trump promised in his campaign. The auto industry also has new labour provisions that by 2023 require between 40 and 45 per cent of automobile parts to be made by workers who earn a minimum wage of $16 an hour. This makes American and Canadian auto industries more competitive as worker salaries will converge across North America. But, the provision doesn’t give concrete incentives for Canadian and American job creation in automobile manufacturing. Mexico has agreed to further labour provisions. It will pass laws to extend labour protections to migrant workers, give workers the right to form unions and create protections from discrimination for women. In addition, labour violations are cause for any of the three countries to sanction one another.

In the dairy sector, Canadian farmers will encounter a loss of 3.59 per cent of their market to US producers because the new deal opens access to supply-managed sectors like dairy. The deal eliminates Class 7 milk pricing, a class of dairy products which Canada created to decrease US dairy farmers’ ability to export to Canada. This made US dairy exports uncompetitive in the Canadian market because they were sold at a higher price. The Canadian dairy market was previously highly protected under NAFTA, so this is an impactful and important difference of UMSCA. In Quebec, this is a particularly important issue. There are 5, 163 dairy farms in Quebec spread across 47 ridings. Prime Minister Justin Trudeau has announced that there will compensation for the affected dairy farmers.

Intellectual property and digital trade have an extension of copyright terms and new provisions for the digital economy. Copyrights now extend to 70 years beyond the life of the author, whereas it was previously 50 years. There are also new prohibitive duties on digital content like music, e-books and protections for internet companies from user content liability issues. Pharmaceutical drugs are also going to be protected from generic competition for 10 years rather than 8 years. The US was pushing for 12 years of protection to please the American congressional voices vying for big pharma money for election backing, so this a compromise with which the US is relatively happy. For those of us who aren’t billionaires, the long-term effects will be problematic because Canada’s ageing population will have to pay more for biological drugs.

Impacts on the International Stage

Diplomatically, there are a number of concerns with the agreement. During the NAFTA re-negotiation process, the USA placed aggressive tariffs on Canadian and Mexican steel and aluminium imports to influence the outcome of the agreement and increase the pressure on either country to renegotiate NAFTA for something that better favours the United States. These tariffs were placed using the trade loophole from Section 232 in the Trade Expansion Act of 1962 which allows the US to block the import of materials critical to national security for the protection of the country’s supplies in the event of war. After Mexico and the US reached an agreement in August, the pressure increased for Canada to sign on as well. The loophole is still in place despite Canada and Mexico’s efforts to secure an exception from it. The US conceded to a side agreement to protect them from future auto tariffs but there is nothing to stop other tariffs on different industries. This is concerning because the American safeguard which allowed the US to implement these tariffs on Canada and Mexico will remain in place. This keeps the door open for future American leaders to force negotiations and place pressures on their neighbours.

Other diplomatic concerns include the Sunset Clause and Clause 32.10. The Sunset clause states that the USMCA will expire after 16 years, with a review every six years regarding an extension of the agreement.  Clause 32.10 requires that the US be notified if Canada or Mexico begin trade discussion with “non-market” countries. This is a major issue in international trade. The two countries most impacted by currently are China and Canada. The two have been negotiating a trade deal for months and this provision is widely seen as the US’s attempt to deter deals with China and for some, an imposition on Canadian sovereignty. Sectoral trade with China would circumvent Clause 32.10 but it still keeps Canada and Mexico’s hands held tightly by the United States.

Now that an agreement is in place, the next step is for Trump, Trudeau, and Nieto to sign the agreement and for all three governments to ratify it. For Canada and Mexico, this should be swift, but with midterm elections looming in the States, ratification might be easier said than done. Once UMSCA is ratified by all three governments, Canadians can expect supermarket dairy prices to lower while Canadian dairy farmers suffer, pharmaceutical prices to slowly rise and a potential decline in auto jobs. Time will tell if Canada gave up too much.  Either way, this new trade deal will undoubtedly affect North America and the world in this attempt to fortify American hegemony.

Rachel Nixon is a U3 student currently pursuing a degree in Honours International Development and Political Science with a double minor in Environment and Gender, Sexuality, Feminist and Social Justice Studies. Hailing from beautiful British Columbia, she has a keen interest in Canadian foreign policy, environmental issues and feminist analysis. In her spare time, Rachel is either writing her first novel or in the library enthusiastically observing the squirrels prancing all over McGill's campus.