Vaccine Hesitancy to Hypocrisy: How the EU Shot itself in Both Feet, then Blamed the UK 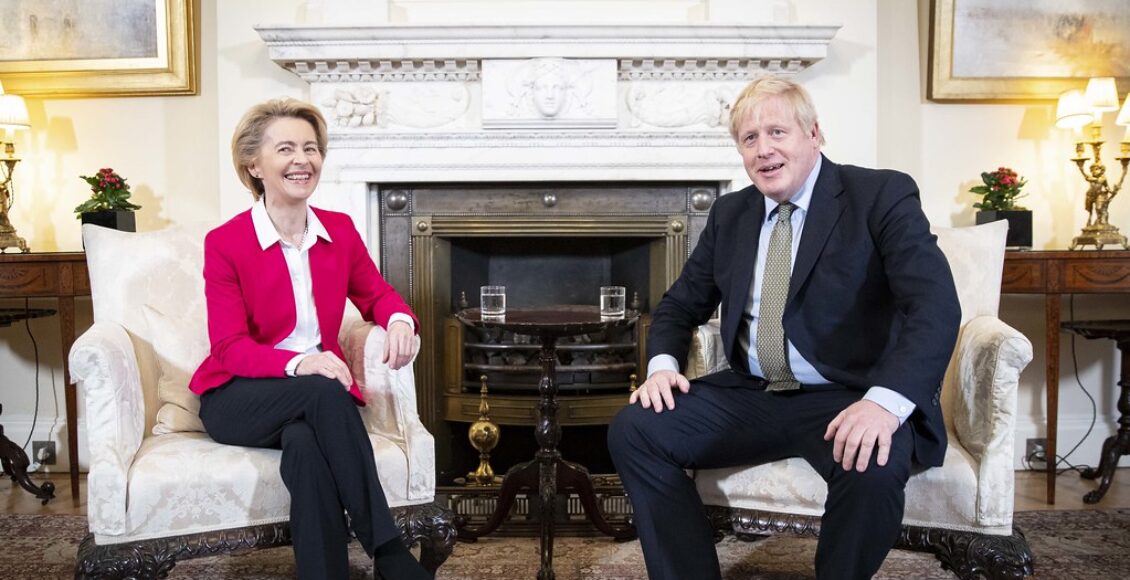 The proliferation of more infectious and transmissible Coronavirus strains sparked an upswing in COVID-19 cases in continental Europe, squandering hopes that its vaccine programme would prevent a third wave. Over 20 countries reported an increase in positivity rates, and 15 reported increased hospital care, according to the European Centre for Disease Prevention and Control. In response, countries like France, Germany, and Poland re-entered lockdowns — before exiting previous ones — all while watching the EU’s vaccine programme come to a grinding halt.

These same countries recently suspended use of the Oxford-AstraZeneca vaccine due to an insignificant and so-far unproven link to blood clots, going against the WHO’s and its own European Medicines Agency’s advice. Yet, as these AstraZeneca doses sit un-administered, European Commission President Ursula von der Leyen seized the opportunity to threaten an export ban on the UK. So, in this game of finger-wagging and blame allocation, why has The European Union designated the UK as its scapegoat?

A first dose of AstraZeneca hesitancy, in a climate of existing skepticism

This is not the first time the European Union has sown doubt over the AstraZeneca vaccine. Initially, the EU was late to the party; it took until January 29th for the EMA to approve the vaccine, almost a month after the UK began administering its first doses. It also suffered the fate of following Pfizer and Moderna, both of which had over 90 per cent efficacy. That being said, its efficacy of 76 per cent after two shots and 70 per cent after only one shot far exceeds the WHO’s target of at least 50 per cent efficacy. Likewise, its efficacy in preventing severe disease and hospitalization is similar to that of Pfizer and Moderna.

These misrepresented claims about the AstraZeneca vaccine circulated as the WHO, UK, India, Mexico, and Argentina approved its use for all age groups — and in February, the UK already reported decreasing hospital admissions among over-80s who received the vaccine. It is important to note that clinical trials had shown over 65s developed an immune response when administered the AstraZeneca vaccine. However, the EU still halted the rollout in one of the most at-risk groups to COVID-19 after deciding that too few over 65s in stage-three clinical trials were infected in the treatment group.

Still, given that vaccine research and development can take decades, it is normal that the EMA take extra precautions in the approval process of COVID-19 vaccines developed in under a year — such as AstraZeneca’s. But in an already skeptical population, the line between exercising precaution and feeding hesitancy among its population is thin. France is already one of the most vaccine-skeptic nations globally. An Ipsos survey conducted in December 2020 found that only 40 per cent of French adults intended to get any COVID-19 Vaccine, let alone the much-scrutinized AstraZeneca, compared to 77 per cent of adults asked in the UK. Knowing this pre-existing skepticism, and after shooting itself in the foot with its initial recommendations, why has Europe decided to shoot itself in the other foot by suspending one of only two available vaccines — during a third wave?

A second dose for good measure

Almost immediately after finally allowing the AstraZeneca vaccine for over-65s, the recent, total suspension of the vaccine across Europe traces to instances of blood clots that occurred in the week after being vaccinated. About 30 reports of blood clots in 5 million doses administered in continental Europe led over a dozen countries to suspend usage of the vaccine. Top scientists noted that this rate of blood clots was actually lower than average for that population, and that commonly prescribed birth control pills pose a much higher risk of causing blood clots, or even that COVID-19 itself has a much higher risk of causing blood clots.

The EU is concerned that in an investigation of  13 cases, 12 were women under the age of 55 who reported blood clots within the same timeframe after receiving the vaccine. The rarity and similarity of these cases demand further investigation — but the suspension of a vaccine that can potentially save countless lives is entirely disproportionate to an unproven and substantively insignificant link to blood clots. Even if a proper link was made between AstraZeneca and blood clots, which the EMA says “is not proven,” the group of scientists behind the above study assured that such an adverse reaction could be managed and treated, which was the case for most of the blood clot cases.

Given the EMA’s own judgement, WHO judgement, investigating scientist’s assurances, statistics coming from the UK, where over 11 million individuals in these age groups received AstraZeneca jabs — what fresh reason has France concocted for limiting the vaccine to those over 55? Does this mean only 55-65-year-olds should receive the vaccine? In this abundance of caution, why doesn’t France go even further and limit the AstraZeneca jab exclusively to men, given the blood clotting was more prevalent in women? Becasuse of this flip-flopping on a life-saving vaccine, France’s confidence in AstraZeneca in France fell to 20 per cent in all populations, painfully illustrating how excess precaution can do more harm than good.

From hesitancy to hypocrisy

Against the background of these limits and suspensions concerning the AstraZeneca vaccine, Europe is unhappy that it will receive significantly fewer doses than predicted in the coming months. Europe is even more unhappy that the UK’s supply chain has remained relatively unaffected — and that over 10 million vaccines produced at some point in Europe had gone to the UK. In contrast, the UK has exported none from its territory.

Ultimately, finger-wagging will only get Europe so far, because these differences boil down to the contracts negotiated months before any vaccines even being approved and not an explicit ban on export. UK Health Secretary Matt Hancock announced that the UK signed a contract early-on assuring the first 100 million doses of AstraZeneca, similar to the US’ exclusive Moderna and Pfizer deals. Be that as it may, Europe’s reluctance to single-out the US raises questions about its motives for targeting the UK’s vaccine rollout specifically.

Though vaccine nationalism should be avoided no matter what, anger concerning Europe’s vaccine deficit should be directed towards the less-than-satisfactory contracts it negotiated with individual pharmaceutical companies instead of individual countries. One could imagine that if the tables were turned, the EU would not be complaining, nor would it share any doses it procured from exclusive contract deals. Meanwhile, The EU itself has blocked the export of 250 000 AstraZeneca doses to Australia — and has now ‘found’ 29 million doses destined for Belgium sitting idly in a warehouse in Italy. The European Commission continues to deny that ongoing plans to further tighten its vaccine exports, against pharmaceutical companies’ contractual obligations to non-EU countries, amounts to an “export ban.”

Above all else, as AstraZeneca vaccines go un-administered — and expire because of EU orders — the threat of refusing to export shots destined for the UK signals a definitive shift from vaccine hesitancy to vaccine hypocrisy.

These 41 doses of AstraZeneca had to be destroyed after Germany suspended their use on Monday, a doctor at a vaccination center in Duisburg told the local paper, WAZ. She said she took the picture, then she cried. pic.twitter.com/NS8rCflkAB

Image of AstraZeneca vaccines ordered to be destroyed by the German government. Via Twitter.