The Value of Cosmetic Change 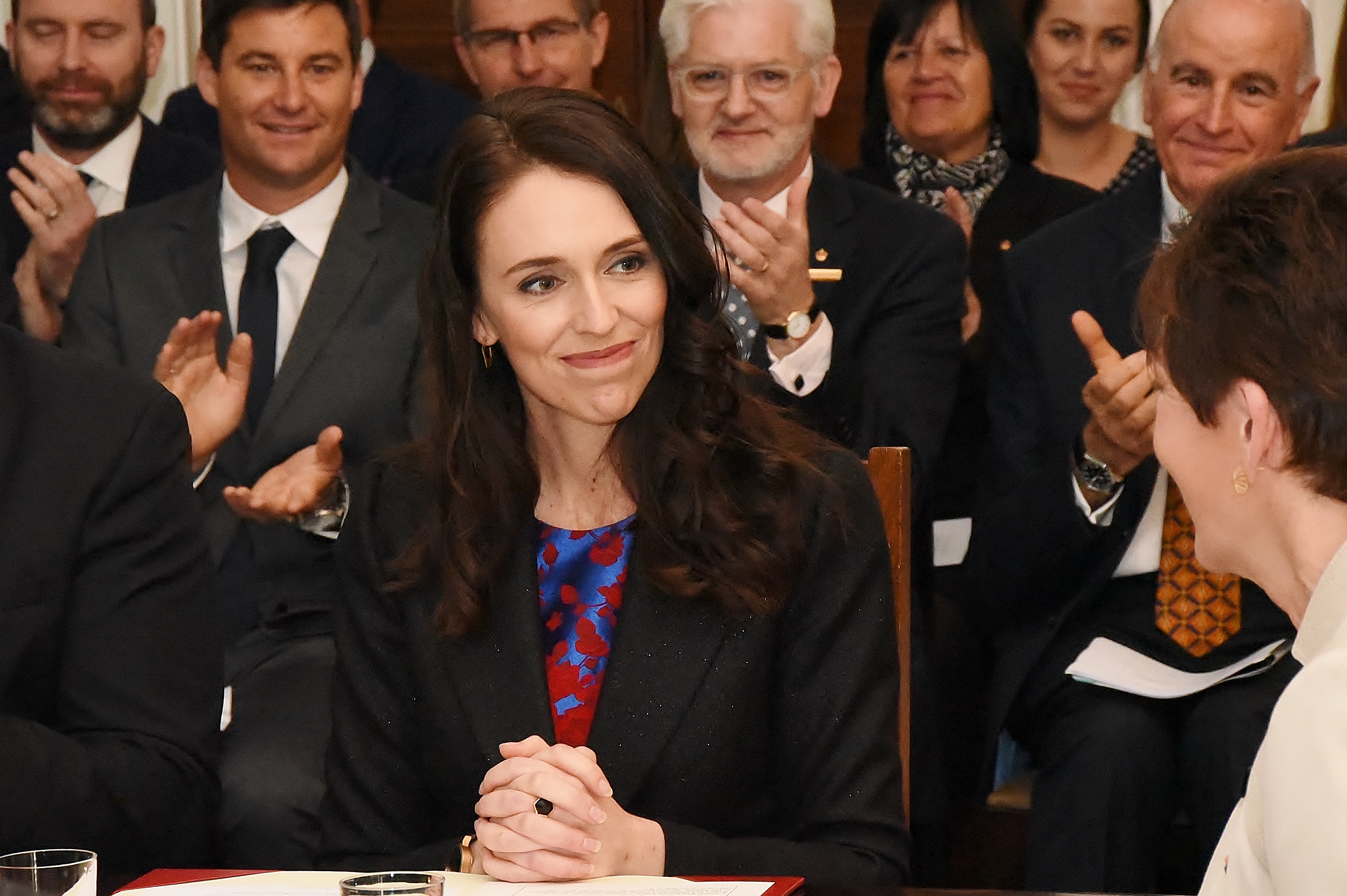 Jacinda Ardern, surprise leader of the Labour Party, is sworn in as Prime Minister of New Zealand. https://commons.wikimedia.org/wiki/File:GGNZ_Swearing_of_new_Cabinet_-_Jacinda_Ardern_2.jpg
Share

Canadians might have a sense of déjà vu – after all, before being elected Prime Minister, Justin Trudeau had only ever sat in opposition but was nonetheless elected due to his campaigning skills.

Even Canadians, however, might be astonished at the time frame over which “Jacindamania” unfolded. It was only seven weeks before the election that Labour’s previous leader suddenly resigned, with polls showing him a full 22 points behind the incumbent National Party. On August 1st, the party caucus hastily assembled and acclaimed Ardern as leader. By the 31st, the first poll was released showing her in the lead. Ardern (“ah-DERN”) only had time to give one speech as Opposition Leader; now she returns to Parliament as Prime Minister.

The following month, the Austrian People’s Party – which had spent much of the previous parliament as an unhappy junior coalition partner, languishing in third place in the polls – decisively won the country’s legislative elections under leader Sebastian Kurz. Since Kurz’s leadership victory five months before, the party rebranded as the “New People’s Party – the Sebastian Kurz List” and abandoned its traditional clerical black for a modern turquoise. In essence, the century-old party placed its entire survival as an institution in Kurz’s hands.

Sebastian Kurz is 31. He left university six years ago.

These are the latest in a string of contests shaped by young, charismatic individuals. Canadians recall that the Liberal Party, fresh off their worst defeat in Canadian history and relegated to third place, climbed to first in polls once the then-42-year-old Trudeau was elected party leader. Emmanuel Macron, the 39-year-old victor of May’s French election, defected from the Socialists, started from scratch a party entirely based upon his persona, and took first place, significantly outpolling the candidate from his old party. This fledgling party then won a large majority in parliamentary elections.

“Popular people are popular” seems like a very uninteresting observation to make; of course personalities matter. Rather, what is remarkable is how little everything else did. Macron had no established party brand throwing its weight behind him, while the pre-Trudeau Liberal brand had the support of only one in five voters. Ardern and Trudeau had zero days of ministerial experience between them. Furthermore, the polling bounces that awaited Trudeau, Ardern, and Kurz were so instantaneous that they could not have been policy-based. (Ardern’s policies, in any case, were largely identical to those of her more forgettable predecessors.) Rather, their success was due to their ability to clearly articulate a story of their country and how it could concretely be improved. Their youth and lack of government experience, if anything, were an asset; it meant they barely had voting records to criticize and were set apart from the much-maligned “establishment”.

This is not to deride these people as merely pretty faces lacking in substance. All three developed comprehensive, costed programmes and defended them throughout their campaigns. The point, rather, is that policy was secondary – important in establishing credibility, yes, but meaningless without the personas communicating them.

How We Got Here

Over the past three decades, consolidated democracies saw their party systems “dealign”. Through the 1980s, established parties could count on a specific sector of the population supporting them election after election, even through successive generations; examples include the working class voting for social-democrats, devout Christians for Christian parties, and the professional class for liberal parties. Yet changes like mass education and globalization meant these voters no longer voted demographically, so that each party must now make a pitch toward a vast swath of undecided voters each time. Vote swings are more violent, and landslides are more common; the campaigning ability of party leaders has taken on a new level of significance, a process aided by the dominance of television in communications.

Meanwhile, the slow, unequal recovery from the Financial Crisis, the relentless force of globalization, and recent waves of terrorism have discredited the existing class of political leaders, creating a much-noted surge in support for “anti-establishment” figures. In particular, many have written obituaries for social democracy – hopelessly torn between a working class, victimized by globalization and with traditional values, and a better-off cosmopolitan class with a firmly liberal outlook. The fact that only five of the EU’s 28 states currently have left-of-centre governments (even including the centrist Macron) lends credence to this narrative.

The victories of Trudeau, Macron, and Ardern throw these eulogies into question. To be perfectly clear, these three benefitted from the very particular circumstances they found themselves in – the Canadian and New Zealand electorates were ready for a new direction after nine years of prosperous if unambitious conservative government, while the scandals surrounding Macron’s conservative competitor certainly helped him. (Conversely, Austria’s social-democratic incumbent, Christian Kern, similarly was a political outsider, was a well-liked communicator, and was parachuted in by a struggling party – but was ultimately powerless against Kurz, though he did significantly better than his party previously hoped for.)

At the very least, what this suggests is that progressivism is hardly on its deathbed. Even long-established parties can embrace the anti-establishment sentiment with the right message and communicator. The volatile nature of dealigned politics explains why the centre-left’s nadir has been worse than ever before, but it is a temporary one – there remains a market for a progressive discourse based on equality that can, at some point in the future, take and keep an outright majority.

What the Future Holds

European parties are slowly realizing this. As noted, both major Austrian parties recently threw out their leaders and brought in “outsiders”. Of the four major Spanish parties, three are led by men younger than 45, without ministerial experience, and running on sticking to their principles; last year they took 70% of the vote between them. The next Italian election will pit Matteo Renzi, 42-year-old reformist crusader of the centre-left Democrats, against Luigi Di Maio, the 31-year-old figurehead of the anti-establishment Five Star Movement.

South of the border, this is a phenomenon the Democratic Party should be well aware of, considering its last two successful candidates were Bill Clinton and Barack Obama, both adored for their personalities and oratorical skills. However, neither its latest presidential candidate nor its current congressional leaders (for all their other qualities) could be described as “magnetic” or an “outsider”.

If the Democrats are to learn from successful progressives overseas, they must look to someone like Jason Kander, a 36-year-old army veteran, Missouri’s former Secretary of State (in charge of overseeing the state’s elections) and the nominee for the state’s 2016 Senate race. He ran an unabashedly progressive campaign in Missouri – he earned nationwide attention for a pro-gun control ad – and lost that race by less than three points, in a state Hillary lost by nineteen.

Kander’s personal and geographical background, and his lack of any ties to the Washington “establishment” (or to either of the party’s feuding wings), make him a perfect fit for today’s political climate. It’s clear he knows how to run a disciplined campaign and connect with a wide variety of voters. By 2020 he’ll be 39, the same age Macron is now, and older than both Kurz and Ardern.

When Kander spoke at a Democratic National Committee convention earlier this year, he emphasized how, in his first run for local office, even those citizens who disagreed with him supported him anyway because he stuck to his convictions. Perfectly calibrating a position to comply with the Median Voter Theorem is less important than clearly and passionately speaking about the problems facing the country and how they can be solved. The elections of recent years, across the planet, have shown just how right he is.