Veganism and Political Activism: A Contentious and Misunderstood Relationship 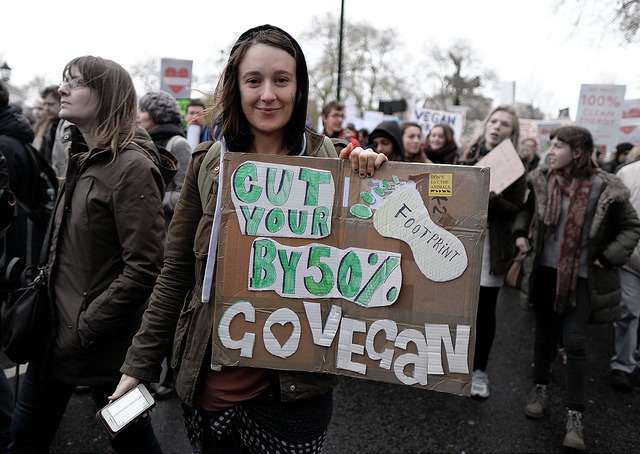 It’s officially 2019, and online personalities such as Piers Morgan are still decrying the introduction of vegan options in fast food chains, even painting himself as a “vegan victim”. But why? Has he never eaten vegan food, like a salad, or a banana, for example? The Cambridge Dictionary defines veganism as “the practice of not eating or using any animal products, such as meat, fish, eggs, cheese, or leather” and as a “lifestyle choice rather than a diet.” The number of vegans in the US increased from 1% in 2014 to 6% in 2017. In 2018, 2.3% of Canadians considered themselves vegans. The draft of the new Canadian Food Guide released in 2017 by the federal government put a new emphasis on plant-based foods, shifting away from the importance traditionally placed unto meats, cheeses and eggs. Yet, despite these concrete developments and the increased popularity of adopting a vegan lifestyle, veganism is still portrayed and (mis)understood as a “fad” or simply as excessively violent or ridiculous political activism. However, these arguments miss the larger ideological base of veganism: it is an ethical lifestyle, one that will not only to protect animals from abuse, but that is beneficial to one’s own health and to the wellbeing of our planet. In October 2018, the UN Intergovernmental Panel on Climate Change (IPCC) warned that the major climate change catastrophe was only 12 (twelve!) years away. Furthermore, the production of meat and dairy is directly correlated to high levels of greenhouse gas emissions and the extinction of a variety of species, and its reduction could help delay the dramatic consequences of climate change.

However, whenever I tell people I’m vegan, none of this comes to mind. Instead, the questions I get asked usually sound like: “How do you do it? Don’t you miss cheese?” “Do you like PETA?” “Why are you vegan?.” And thus begins the vicious loop of explaining your veganism, only to be criticised for always talking about it. However, veganism is not one fixed, static identity; its benefits are often overshadowed by over-generalised misunderstandings of veganism as a fad or just as activism. Nevertheless, its activism cannot be ignored. Veganism suggests a massive shift from the status quo of the past 2000 years: it means reducing as much as possible the production and intake of animal products, it implies the end of several professions and sectors, such as the work of butchers and the dairy industry. Activism, whether we support it or not, is just one way of shining light on this up and coming lifestyle. However, activism does not need to be violent: whether in the form of civilian protests and increased sensibilisation and education campaigns led by groups such as PETA, vegan activism, as well as veganism, are in full bloom.

Civilian protests are just one of the forms of veganism activism practiced in the past few years. 2018 was a particularly lively year for protests, especially in France and in the United Kingdom. Several butcher shops in France faced vandalism or destruction by the hands of vegan activists. In June 2018, French butchers sent an official letter to the former Minister of the Interior, Gérard Collomb, demanding police protection from violent, “terrorist” vegan militant groups. The activists threw fake blood on the façades of different shops and spray painted “stop speciesism” on their windows.

Vegetarianism and veganism are becoming increasingly popular in France, one of the world’s largest meat consumers in the world, with 5% of French people identifying as vegetarian or vegan in 2017, and 30% as flexitarians – those who try to favour plant-based foods and reduce their consumption of meat, without completely eliminating it. Dubbed “the land of meat,” France, compared to its neighbour the UK or other Western countries such as Canada or Australia, has been slacking in the move towards plant-based diets. In a country with an incredibly meat-based gastronomy, vegans are using extreme activism to bring attention to their cause. A report by the national statistical agency, INSEE, in 2017, points out an increase in the volume of vegetal production and a decrease in the price of plant-based products, as well as a decrease in the production of animal products and its subsequent rise in prices. Vegan activism in France has adopted a more “violent” approach in order to bring light to a (marginal) lifestyle, in a country that relies heavily on meat and animal products for jobs, their economy, and fine dining. While violence is not necessarily the best way to effect a switch to veganism, activists in France are focusing on grabbing people’s attention.

Vegans in the UK have been similarly criticised for the use of violent civilian activism. Farmers have claimed they live in “fear,” receiving death threats from vegans and being labelled “murderers.” The development of vegan activism in the UK is not without provocation. Earlier in the year, emails from the editor of Waitrose Food magazine were leaked, in which he called out the “hypocrisy” of vegans and suggested vegans be force-fed meat, or even killed. Following the controversy, an activist group proceeded to protest in the meat aisle of a Waitrose supermarket in the city of Brighton. A segment entitled “Do people hate vegans?” also aired on Good Morning Britain, during which the panelists discussed their feelings on vegans and veganism. The panelists, as well as certain online users, argued that vegans were “irritating” (insinuating that they are needy when it comes to hosting dinners or eating in restaurants), and that veganism was a “cult” in which vegans impose their diet onto those around them. Veganism was compared to gluten-free diets, and both were described as “fads.” This statement is simply not factual. Gluten-free diets are necessary for those diagnosed with celiac disease – which is completely unrelated to veganism. Veganism, as well, is not a fad diet, but a lifestyle decision to, for example, reduce the harm inflicted onto animals. Other viewers expressed outrage at the segment, making the point that anti-vegan rhetoric stems from subconscious guilt surrounding one’s lifestyle choices.

A survey in Scotland highlighted the extent to which vegans are discriminated against in the country. Vegans noted a lack of understanding of the “moral convictions that vegans live by,” and detailed experiences of discrimination when they were force-fed meat in hospitals, or when children were forced to participate in experiments they deemed unethical, such as dissections or zoo trips, and missed out on school lunches because of the lack of vegan options. Even Anthony Bourdain, one of the most revered food specialists and cooks, compared vegetarianism to a “Hezbollah-like splinter-faction.”

In a world where veganism as a lifestyle is disrespected and vegans are discriminated against, civilian, and sometimes violent, activism has become more popular. Vegans are split on the effectiveness of extreme activism, with certain, including myself, not necessarily seeing the benefits as it can reinforce pre-existing, negative prejudices concerning veganism and vegans. However, in moments of frustration, especially after the comments made by the Waitrose magazine editor and Good Morning Britain, it can be extremely powerful.

Whether we like them or not, PETA (People for the Ethical Treatment of Animals) is an essential actor and institution in veganism. PETA is dedicated to the defense of the rights of animals and is a reliable source for education about veganism: whether it be personal reasons to go vegan, environmental and ethical benefits of veganism, or tips on how to go vegan in all aspects of life, including personal care and fashion. PETA, however, is most infamously known for its controversial marketing campaigns. In fact, their campaigns are bold, using shocking statements in order to get people to question society’s reliance on animal products. Some of their most criticised campaigns include “got autism?”, a campaign which linked the consumption of cow’s milk with autism. This connection is shocking; yet, studies have shown negative effects of casein (milk protein) on children with autism, such as reducing their desire for social interaction. Nobody is saying dairy is the cause of autism. Here, through a disturbing statement, PETA is asking consumers to learn about the possible effects of dairy on the mind and on the body. Another campaign, “Meat interrupts your sex life!” illustrates different couples in bed, looking frustrated, separated by a cow, a chicken, or a pig, and is accompanied by a video that compares sex of a meat-eating couple and a vegan couple. Sure, this statement seems ridiculous. Yet, in reality, consuming meat and dairy products can clog arteries, therefore affecting your sex life. It is an overly general statement, but it is provocative, and it works, since now people might research why vegans would have a better sex life than meat-eaters.

Finally, in December 2018, PETA released an ad against speciesism, which offered animal-friendly alternatives to colloquial terms such as “bring home the bacon.” The latter received a lot of backlash online, and was criticised for comparing speciesism to racism or homophobia. However, this critique is completely unfair. As a vegan, I’m often frustrated by the campaigns run by PETA, which tend to be a bit excessive for my taste. However, this specific ad by PETA is asking us to reflect on the way we normalise animal abuse in society. PETA spokesperson Ashley Byrne, in an interview with the Washington Post, explained how, maybe now when people say the phrase “bring home the bacon,” they will begin to think about the torture endured by pigs before they were killed.  Anybody at PETA could predict the response this ad would generate, and that’s exactly why they used it anyway. This ad was quickly ridiculed on Twitter, and transformed into a meme; celebrities and online personalities, including vegan influencers, felt frustrated at PETA’s new move.

Personally, I’m growing fonder of PETA. Sometimes, I feel a lot like this meme, in which my “friend” PETA throws away, as easily as a plate, my credibility as a vegan. Other times, I applaud them for their bravery in being the only ones who aren’t afraid to speak up about the ugly truth of the animal-products industry. In a time where popular environmental activism ignores the effects of the animal-products industry and veganism on climate change – such as Greenpeace or meat-eating celebrities who campaign online for environmental activism – PETA remains a strong and reliable voice for veganism.

Veganism is severely misunderstood. In adopting this lifestyle, vegans face constant questioning and are unjustly labeled as “irritating” or “demanding.” With veganism becoming more and more popular around the world, even in heavily meat-based countries such as France, it remains crucial to be heard and understood. Civilian protests and PETA are actively fighting for animal rights and protection, not only for ethical reasons, but also to protect our planet. Movies such as Okja or Carnage, both released in 2017, offer a new medium for activism: entertainment. By submerging oneself in the story of Okja (a genetically-modified pig), or in Carnage’s mock-umentary format, we are indirectly being educated about the reality of meat and dairy production. In Okja and Carnage, vegans are portrayed as over-the-top and ridiculous, but in the end, the message of the films is on their side, with brutal slaughterhouse and factory farming scenes making us question the overwhelming presence of meat in our society. During the production of the movie, the director of Okja even became vegan after visiting a slaughterhouse. Several viewers, after finishing the movie, admitted to making a more conscious effort to reduce their meat consumption or adopt a vegetarian or vegan lifestyle. These different forms of activism have one thing in common: they are provocative, in order to create not only a reaction, but self-reflection – and that, in my opinion, is the key.