Venezuela and the Road Ahead 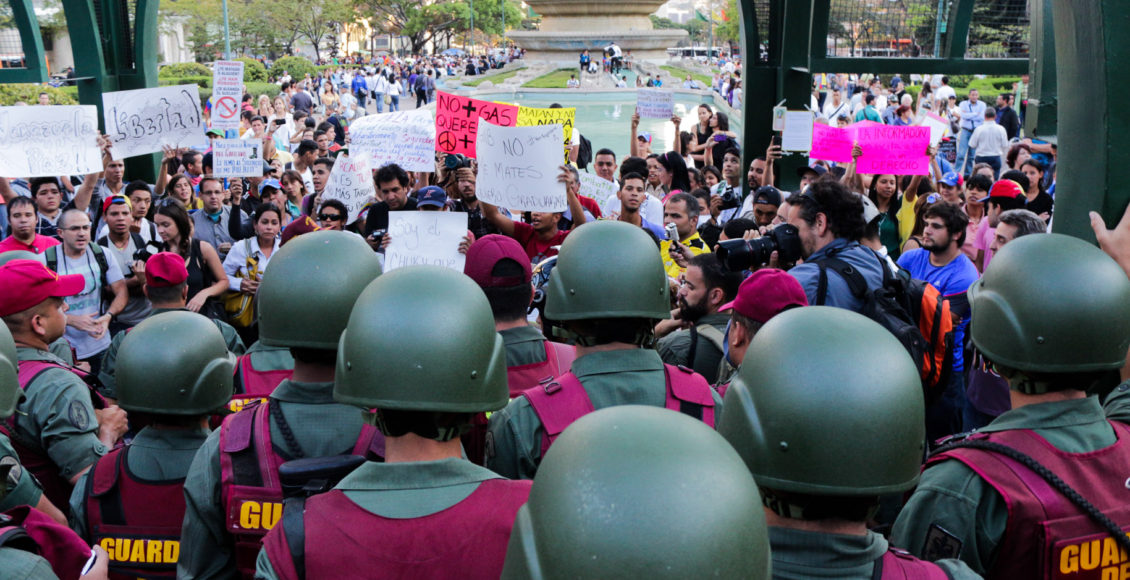 In the last few weeks, President Nicolás Maduro has surprisingly agreed to give a number of interviews. In a recent conversation with BBC journalist Orla Guerin, Maduro makes many a polemic assertion (you can read the complete transcript here). He says there is no humanitarian crisis in Venezuela, and that it is all a pack of lies fabricated by Western nations and far-right governments in order to get control of the country. He blames present-day American imperialism for the economic collapse, which, he argues, has nothing to do with him being in power. He rejects the humanitarian aid the opposition is trying to transport into the country to feed the starving population on the grounds that it poses a threat to the “dignity” of his people. He claims that Venezuela is a peaceful nation and that members of the opposition have every right to express their opinions publicly, without fearing political persecution from the State. Then, when asked about his much-disputed victory in the last elections (from which the opposition was excluded), he is adamant that there is no possible contention against its constitutional legitimacy. In fact, he goes as far as to question the objectivity and mental sanity of Guerin, urging her to refrain from formulating such “dogmatic”, “uncritical” and prejudiced questions.

Could a fair-minded person with some minimal knowledge about the situation in Venezuela believe a word of this? Surely not. And yet, if one peruses the contents of publications that openly defend Maduro or listens to his remaining die-hard followers in the country, it transpires that demagogic rhetoric can indeed have very lasting and damaging effects. For instance, last year a 44-year-old single mother who could not even feed her children because of the crisis surprised the world when she expressed her unconditional support of the regime to the press: “I am loyal to my revolution. Even if they call us ignorant, even if they call us stupid, it doesn’t matter”. We can attribute such level of loyalty to the vast array of populist concessions Hugo Chávez made to the poorest during his socialist presidency from 1999 to 2013, at the expense of Venezuela’s financial security.

What Maduro so blithely ignores is that, in making these sorts of declarations in recent interviews, he actually does a great favour to his millions of detractors, both inside and outside Venezuela. Not only does he provide ample evidence of his inability to deal with reality, but he also unintentionally cautions the international community against the manifold perils of leaving power in the hands of a dictator.

Behind the absurdity of Maduro’s comments, lies a bellicose and sinister character, who – even at this critical time – is willing to defy the ultimatums of his dissidents from all around the world. In light of the multiple warnings from organisms such as the Organization of American States (OAS), the Lima Group, the United Nations and the European Union, it is quite impressive that the Venezuela of Maduro has lasted this long. Beyond any doubt, a determinant factor has been Maduro’s absolute control of the National Bolivarian Armed Forces as Commander-in-Chief. According to Professor Ronal Rodriguez from the University of Rosario’s Venezuelan Observatory in Colombia, understanding the military “has always been fundamental in understanding [Venezuela’s] political system.” Without the protection of the armed forces, Maduro would not dare to challenge his rivals so carelessly. Despite the numerous requests from many political leaders in the world to stop supporting him, the armed forces of Venezuela still pledge allegiance to their dictator. Why? Mainly because they are afraid of losing the positions of privilege which they have accumulated in the State throughout the years. This “politicisation” of the military is the reason why General Vladimir Padrino is also the defence minister, and General Remigio Ceballos often meddles in state affairs. It is also important to note that after the government of George Bush banned the sale of military arms and technology in 2006, Venezuela found generous suppliers in the fellow dictatorships of Russia and China.

From the very beginning, it has been clear that the only victim of this tragedy is the Venezuelan people. The hardships inflicted on the population are surreal, to say the least. As of January 2019, there is a 2,688,670% hyperinflation, almost 90% of the population is below the poverty line, and the estimated debt of the country is equivalent to 36 billion dollars. According to the UN, around three million citizens have left Venezuela since 2015 (many of whom have actually fled on foot).  It should come as no surprise that the vast majority of economists and political analysts agree that the escalation of the economic crisis is a result of the socialist and populist policies established during the Chávez administration.

In an exhaustive study, the Brookings Institution captures the essence of the crisis: “Venezuela has really become the poster child for how the combination of corruption, economic mismanagement, and undemocratic governance can lead to widespread suffering.” Clearly, the earthly paradise promised by Chávez gradually turned into the massive disaster to which many socialist regimes were condemned to in the past.

In addition to these predicaments, Maduro’s forces have also perpetrated thousands of human rights violations with impunity. The United Nations Human Rights Office has documented and denounced many of these crimes, describing them as the result of “widespread and systematic use of excessive force”. In a similar vein, the Inter-American Commission of Human Rights (IACHR) has repeatedly urged the government “to cease punitive measures against protesters and to effectively fulfill its international human rights obligations”. Furthermore, some paramilitary groups known as colectivos have also been openly hostile towards dissidents since the times of Chávez. If there were any doubts about his totalitarian control of the country, Maduro himself has put them to rest with his fierce blockade to the humanitarian aid delivered by the opposition from Colombia in the past few days. A conflict that already counts three burned aid trucks, four casualties and hundreds of injured civilians. It is also worth remembering how Maduro threatened the population with the removal of government handouts (which are vital to get food supplies) in order to secure votes, and in turn a victory in the last fraudulent elections.

Before Chavism, specifically between 1959 and 1999, Venezuela was a model of progress and prosperity for the other countries in Latin America. In those days, Venezuelan society welcomed immigrants from all around the world. Apart from having benefited from its abundant oil reserves (to this day, the largest in the world), the nation took pride in having established a solid democracy. In fact, many of its leaders — in particular, President Rómulo Betancourt, who ruled the country between 1959 and 1964 — did not hesitate to denounce autocratic regimes in the region. This is not to say that everything was perfect. Nevertheless, there were democratic institutions that impinged upon the actions of political leaders and gave a voice to the people in state affairs. Today, Maduro’s government, following the steps of Chávez, not only has finished dismantling such an admirable legacy, but it also aspires to perpetuate its own power at all costs.

And yet, despite having endured so much throughout these years, the Venezuelan women and men from the opposition have been persistent in their efforts to reclaim democracy for their country. Juan Guaidó, María Corina Machado, Julio Borges, Leopoldo López, Freddy Guevara, Henrique Capriles, Antonio Ledezma, and all of the Venezuelans who have taken to the streets to demonstrate or been exiled, are defenders of freedom. All of them know that as long as the tyrant remains in power, it will be virtually impossible for Venezuela to re-emerge from the ashes. Thanks to them, there are many reasons to be optimistic. For one thing, both the victimization of Maduro and the #handsoffvenezuela campaign that his supporters have tried to reinvigorate on a whim are indicative of the desperate hour the regime now faces. Following the endorsement of Guaidó – president of the National Assembly and member of the Voluntad Popular (transl.: Popular Will) party – as the interim president by more than 50 governments, there is finally hope that the protracted suffering of the Venezuelan people will come to its end.

Coupled with the governments of Nicaragua, Bolivia and Cuba, Maduro’s regime is a vestige of the long autocratic legacy that saw figures such as Somoza, Trujillo, Pinochet, Videla, and Fujimori rise to power in the region. While the remaining dictators can indeed continue doing a lot of harm, it is clear that Latin America is no longer a continent of dictatorships. Unlike what happened in the last few decades, these days there is an unprecedented consensus in favour of democracy and liberal principles such as freedom of speech, freedom of the press, freedom of religion, gender equality, and civil rights. Venezuela must not be an exception.

In one of his latest articles on El País, Peruvian Nobel Prize in Literature Winner Mario Vargas Llosa says that one day, in a not too distant future, a Venezuelan will write a great Tolstoyan novel about what happened — and is still happening — in their country. I believe that novel is already in the making and that, sooner rather than later, Venezuela will be free again.