Venezuela through the Eyes of the Global North 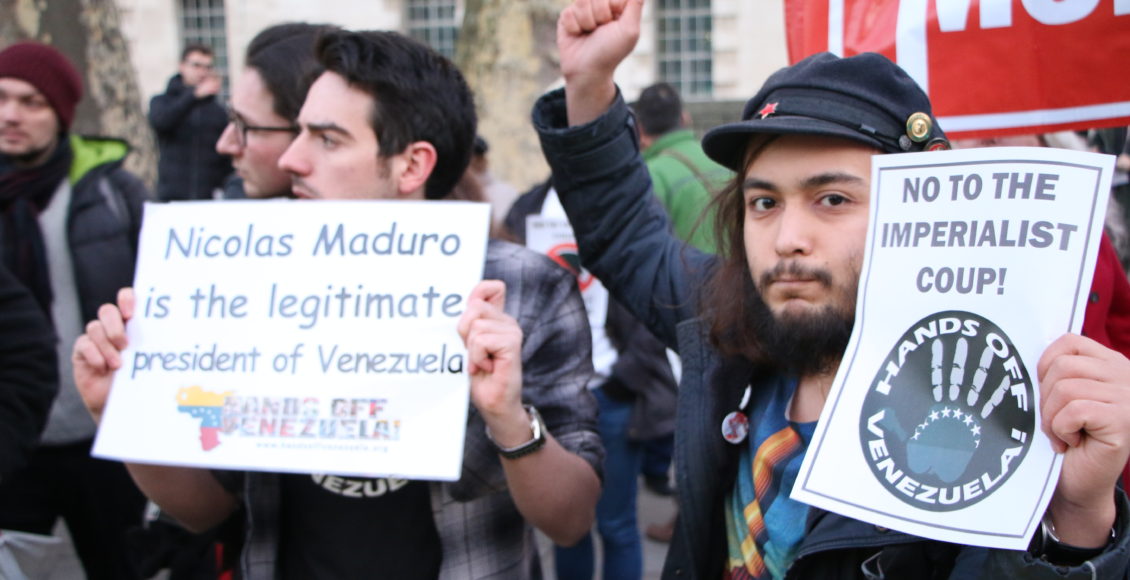 Many in the West have become obsessed with Venezuela, whose complicated politics, history, economic and social dynamics are often reduced to simplistic narratives that attempt to explain the current crisis in ways that fits their ideological agenda. Conservatives commonly use the situation in Venezuela to push their free-market ideology by blaming the crisis on the adoption of socialist policies. For some leftists, the most recent developments in Venezuela are a Western imperialist ploy to out a democratically-elected socialist leader.

Both sides, however, fail to successfully account for the nuances of the current Venezuelan crisis. Instead the country is used as an object to promote the political ideology of each side. The narrowness of this dichotomy between left and right fails to account for the complexities of Venezuela, and the Latin American region on the whole including the historical contexts, economic variability, and political conditions that are inherently unique to the region.

The right-wing obsession over Venezuela is clear in conservative media headlines: “Venezuela is the socialist-wasteland that Ocasio-Cortez and fellow Democrats are leading the US towards”, “How socialism turned Venezuela from the wealthiest country in South America into an economic basket case”, “Venezuelan who escaped socialist nightmare slams Green New Deal”, among a myriad of others. Conservatives argue that socialism is what has plummeted Venezuela into a devastating humanitarian, economic and political crisis. The reality, however, is that the collapse of Venezuela is more nuanced than simply the adoption of socialist policies. The narrative of a complex geopolitical system, however, does not benefit the political agenda of those on the right that seek to denounce the dangers of socialism which is why the narrative remains consistent among conservative circles. I have unpacked and debunked the Global Right’s mythology on Venezuela previously, which is why the focus of this piece highlights the narratives perpetuated by the Global Left.

Despite the many accounts of human rights abuses, deteriorating quality of life, and wide-spread suppression of opposition voices, there are still a number of people in the Global Left that condone the authoritarianism of the Maduro regime. This tolerance comes largely from a desire to denounce American imperialism in the region, particularly in light of the US sponsored interventionist rampage of the 20th century that spread across Latin America.

This worldview, though, is grounded in reality. Looking back to years of U.S. interventions in the region and their support for many brutal right-wing military dictatorships, as well as the history the United States has of sponsoring coups to overthrow democratically elected leftist leaders such as Jacobo Arbenz in 1954 Guatemala and Salvador Allende in 1973 Chile. In the context of the Cold War, the U.S. viewed these leftist social movements that emerged in the region as a threat to their global hegemony and the balance of power, particularly since the communist USSR was the challenger, which is why they used a number of interventionist methods. Thus, when left-leaning Maduro says that the U.S. is trying to govern Venezuela from Washington by pushing for Guaidó to take over, he is invoking a very real historical past.

Nevertheless, there seems to be some fundamental differences in this case. First, Guaidó does not plan to become Venezuela’s permanent president. As the Venezuelan constitution dictates, when the National Assembly leader assumes power in a situation like this, he must call elections within 30 days. Secondly, the dire humanitarian crisis in Venezuela and Maduro’s shades of authoritarianism have allowed for Guaidó to have the backing of a significant part of the population with tens of thousands of people turning out for protests that he has called. Despite the grassroot nature of Venezuelan support for Guaidó, many in the Global Left have reduced this situation to a narrative of socialism versus imperialism rather than looking at the nuances of the situation.

The “Venezuelan Solidarity Campaign”, a pro-Maduro group based in London, for example, has decried the international coverage of Maduro’s repression and the humanitarian crisis in Venezuela as narratives pushed forwards by the “fake news media”.  Many of the supporters of this movement deem the 2018 Venezuelan elections, where Maduro won with over 68 per cent of the votes, as “free, fair, and fully transparent.”  It is important to note that these elections had a record-low voter turnout with only 46% of the population voting which is not only an indication of a democracy in decline, but with the disillusionment people have with the democratic system in the country.  These assertions ignore the multiple accounts from third-party international observers of election tampering. This includes the European Union, the Organization of American States, and the Lima Group, who have all rejected the legitimacy of the electoral process in Venezuela.

For starters, the electoral committee of Venezuela, the Consejo Nacional Electoral, is mostly comprised of Maduro loyalists who have ignored vote tampering in past elections to favour Maduro’s regime. Moreover, as most T.V. and radio stations are controlled by the government, it is the norm for it to constantly spout pro-Maduro propaganda.

Allegations that the elections were indeed not “free, fair, and fully transparent” get more specific by having Maduro essentially implying that anyone that does not vote for him, will lose their food subsidies. “Everyone who has this card must vote,” Maduro said at campaign rallies, referring to the IDs Venezuelans use to receive their subsidies. “I give and you give.”

In a country where nine out of ten people live in poverty and where  currently Venezuelans on average have lost 24 pound in body weight, food translates into political power. Maduro knows this. His food subsidy program, called CLAP for its name in Spanish, offers a lifeline in the unprecedented economic crisis the country is suffering. As reported by Reuters, “Mariana, a single mother who lives in the poor hillside neighborhood of Petare in the capital Caracas, says the handouts will decide her vote.” As minimum wage fails to cover the exorbitant prices of basic needs brought about by inflation, the CLAP is the only thing a lot of people have.

The weaponization of access to food distorts the democratic process as many people who live in the margins had no choice but to cast their vote for Maduro or else fail to meet their basic needs for survival. As established by the Center for Strategic and International Studies: “the Maduro regime is weaponizing its safety net program during a time of crisis in order to prioritize, amplify, and concentrate political power.” The recent developments in the crisis further illustrate this point with the Maduro regime establishing a self-imposed blockade to prevent humanitarian aid, much of it being food, coming from the Colombian and Brazilian border. As Maduro knows the power that comes with controlling food access, by taking these measures, Maduro is not only depriving his own constituents of food, but also blocking the opposition from reaching to those people that live on the margins.

Another Global North-based campaign that has garnered recent media attention is the “Hands Off Venezuela” movement. This campaign is focused on denouncing imperialist foreign intervention that rejects the validity of the Maduro regime which stems from the aforementioned long history of U.S. meddling in the region. Notably, foreign intervention for the “Hands Off Venezuela” movement  includes not only military force, but any form of aid.

The movement started in response to the 2002 coup on Chávez, when the U.S. publicly recognised interim president Pedro Carmona. Despite accusations that the U.S., in fact, staged the coup, CIA documents revealed that while the U.S. was aware of the intention of a coup, they were not behind it, establishing rather that American officials issued “repeated warnings that the United States will not support any extraconstitutional moves to oust Chávez.” Considering that the current administration has virtually no foreign policy in Latin America, it is unlikely that the coup was backed by the United States.

The movement also fails to recognize that Maduro is not Allende and that he is certainly not Chavez. Maduro had to tamper with the democratic process in order to cling to power. Not only did he engage in vote-buying and ensuring that his loyalist controlled the electoral office, but he also banned and imprisoned opposition leaders that were most popular with the citizens of Venezuela. He is cracking down on street protests with lethal force, and he held a rigged election in 2017 to instate a legislative body that supplanted the country’s parliament, the only branch that was controlled by the opposition.

Unlike Maduro, his predecessor, Chávez, was always careful “to maintain electoral legitimacy”, as Francisco Toro, editor of Caracas Chronicles, an opposition-friendly news and analysis site, told Vox News. Indeed Chávez had autocratic tendencies such as using state money to fund his campaigns, but he did not steal or cancel elections blatantly unlike Maduro. So even though Chávez arguably laid the foundations that established the current political, social and economic crisis in Venezuela, he remained widely loved by many of the country’s poor even in the face the opposition against him because he maintained a level of legitimacy and relative efficacy in his policies.

Many in the “Hands Off Venezuela” movement take an apologist rhetoric that fails to condemn an autocrat that has left over 3 million people displaced and over 80 percent of households living in poverty. The movement seems unable to acknowledge Maduro’s shortcomings as a leader and a politician, even though his disdain for opposition voices is “systematically blocking the ability of the Venezuelan people to express themselves through electoral means”, as political sociologist Gabriel Hetland points out.

Toshiko Sakurai, a progressive Venezuelan exile, expresses this frustration with the rhetoric of the Global Left in her blog on the Caracas Chronicles: “You know the worst of it all?” she wrote. “We agree on most things. We both believe in public universal education and healthcare financed with taxes. We agree that every government should ensure that its citizens have a safety net and that wealth redistribution should be a major driver against inequality.”

“Here’s a secret though: supporting socialist policies doesn’t keep me from denouncing the brutal monstrosity being inflicted upon my country.”

Unfortunately, both the right and the left are blinded by their own ideological agenda when making assertions and arguments about Venezuela. When we discuss Venezuela, and perhaps any country and region that is not our own, it needs to be done in a manner based on facts that leaves behind political interests and personal political ideology. Reductive conservative and leftist narratives strip Venezuelans from their agency as writers of their own history and fails to account for the multiple and complex dynamics that shape the country and the current crisis at hand.