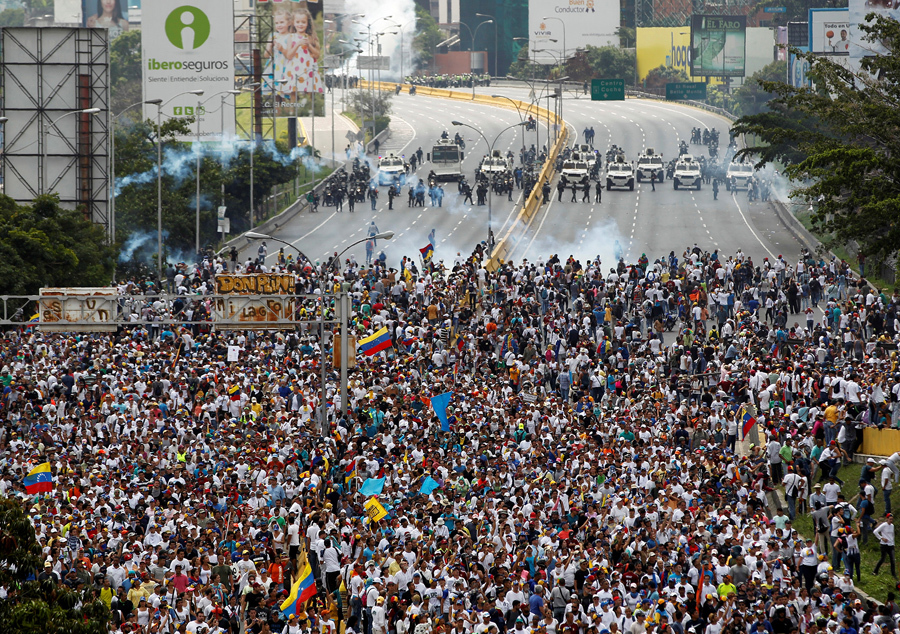 Venezuela recently reached a breaking point in its crisis, with the fall in influence of Nicolás Maduro’s government and the collapse of Chavismo. The country has experienced since 2013 with the continuation of Chavez’s leftist populist ideology, called Chavismo, under the presidency of Maduro a drastic erosion of the Venezuelan society. As most of the socialist reforms created under Chavez and continued under Maduro were based on a charismatic leader and an oil-based economy, the death of the former and the decline in value of the latter led to the collapse of the economy and the rise of authoritarianism to preserve state’s power.

The turning point in the crisis is visible in the increasing frequency and intensity of popular mobilization against the regime since April. In fact, a recent survey by Datánalisis reports that 88% of the population disapproves of Maduro’s government, including rising disillusionment from the poorest segments of the population. The mobilization of the poor is significant, showing the erosion of long-time Chavista support, which constituted the social base of the current regime. This overall mobilization also demonstrates collaboration between historically opposed social classes, transforming the crisis into a national problem that affects every Venezuelan.

Venezuelans feel the rising acuteness of this crisis through the severe shortage of basic goods, like food and medicine, increasing the population’s struggle to meet basic needs. A recent report by the Human Rights Watch reveals that most hospitals in Venezuela lack access to basic medicines, which carries dire consequences for the population. In fact, internal reports by the Ministry of Health found that 65% of mothers die during childbirth, which is 45% higher than in 2013. Infant mortality also rose significantly this year due to medicine shortages. The severe food shortage directly affects the livelihood of Venezuelans. In fact, the National Survey on the Living Conditions in Venezuela by ENCOVI found that the average Venezuelan lost 9 kilograms between 2015 and 2016 because of rising food prices, diminishing nutritional access. This phenomenon, known as the ‘Maduro diet’, falls the hardest on the poor as they rely on government’s distribution of foods, which is decreasing with the capacity of the state.

In fact, the severe shortage of basic goods relates directly to the collapse of the national economy. The recent fall in oil prices, which constituted over 90% of the national economy, led to hyperinflation, which lessened the ability of the state and the population to purchase basic goods. According to the Central Bank of Venezuela, the government’s financial reserve is running out as national debt increases and the real value of the Bolivarian dollar decreases. This leaves the domestic market in chaos, as the government cannot respond to the shutdown of local industries that no longer produce at government set prices. The rising inability of the population to purchase basic goods is another factor in the current crisis as CENDAS’ findings show. In 2017, one family of five would need 1.06 million bolivars to pay for a basket of goods each month. Therefore, the population faces a conundrum that is becoming increasingly unbearable due to the people’s and government’s lacking access to resources.

The constitutional crisis is also another factor behind the rise in popular grievance. Interviews with anti-government protesters reveal that, besides their complaints about basic goods, many Venezuelans are also concerned with the removal of their democratic rights and freedoms. The Supreme Court’s March coup attempt to remove power from the opposition-led National Assembly resulted in one of the largest protests in Venezuelan history on April 19. In the following days, the government’s threat to withdraw from the Organization of American States (OAS), combined with its violation of human rights and the introduction of a plan to re-write the constitution and entrench current powers led to further mobilization in May. The violation of popular civil rights and the population’s increasing inability to access basic goods are crucial to understand the current situation in Venezuela. The increase in anti-regime popular mobilization across class lines represents a breaking point in this crisis as it indicates the collapse of Chavismo, an important characteristic of Venezuelan government since 1999.