Victory at the Asia Cup: How Qatar Demonstrates Resilience Against the Saudi Blockade 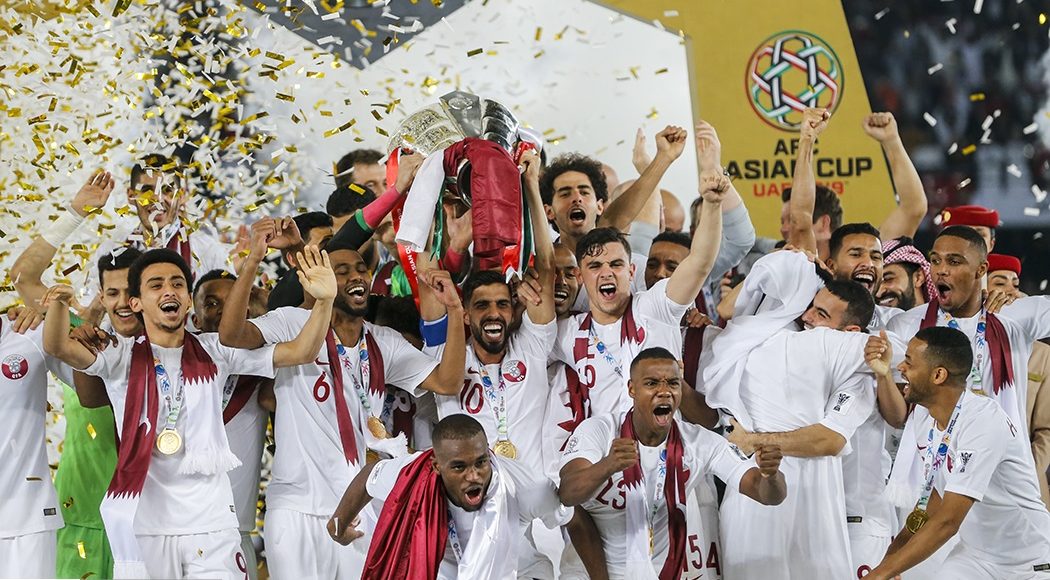 As the Asia Cup kicked off on January 5th, two teams from Group E had more on their minds than just football.  Not only were Qatar and Saudi Arabia keen to redeem themselves after early losses in the 2015 Asia Cup group stage, but they were also ready to demonstrate national pride in the course of a diplomatic crisis that has seriously damaged relations in the Arabian Gulf between Qatar and its neighbors for nearly two years.  To add another layer of tension, the Asia Cup was held in the United Arab Emirates, a strong ally of Saudi Arabia in their soft power war against Qatar.

The Qataris went undefeated in the group stage, beating Lebanon, North Korea, and Saudi Arabia without allowing a single goal from any of the three teams.  The UAE later faced off against Qatar in the semi-finals but would fall to Qatar 0-4 in humiliating fashion.  This paved the way for Qatar to beat Japan in the final match 3-1, where Qatar conceded their only goal of the tournament.  Star player Almoez Ali broke an Asia Cup record for total goals scored, netting nine of Qatar’s 17 tournament goals.

Although Qatar secured the best sports achievement in its country’s history with their victory, no Qatari fans could witness the spectacle firsthand, even those who had bought tickets prior to the event.  Per the terms of the blockade, Qataris were banned from entering the UAE, and while Qataris can now enter the UAE in some cases, direct flights from Doha to the UAE have stopped altogether.  Throughout the Cup, Qatari athletes experienced constant harassment; Emirati fans hurled sneakers at Qatar’s players and yelled insults during the Qatari national anthem to send the message that their Qatari neighbors were not welcome.

Recent turmoil in the Gulf region explains Emirati hostilities towards Qatar and draws parallels between the Asia Cup and current events.  On June 5th, 2017, Saudi Arabia, UAE, and Bahrain blockaded the Qatari economy, cut off their own airspace to Qatari planes, and severed diplomatic ties, allowing Qataris currently living within their borders two weeks to return home and calling for their own citizens to leave Qatar immediately.  The Saudi government issued a list of 13 demands on June 22nd, stating that Qatar’s refusal to comply would beget the continuation of the blockade.  Among other demands, the list instructed Qatar to shut down Al-Jazeera, abolish its intelligence ties with Iran, and stop funding and harboring international terrorists from groups such as Al Qaeda and the Muslim Brotherhood.  Saudi Arabia is joined in their boycott by the UAE, Bahrain, and Egypt, as well as smaller countries such as the Maldives, Mauritius, and Mauritania.

The Saudi coalition caused severe damage to Qatar’s economy in the immediate aftermath of the boycott.  Previously, Qatar had directed 80 percent of its foreign trade toward states in the Gulf Cooperation Council (GCC), a six-state union including Qatar, Saudi Arabia, UAE, Bahrain, Oman, and Kuwait.  Saudi Arabia blocked off Qatar’s only land border, through which food trucks had regularly earned quick passage.

Yet, as Gulf pressure continues unabated, Qatar is slowly returning to its former strength.  Their victory at the Asia Cup follows a string of other economic and political wins for the peninsula nation.  For one, Qatar’s trade has pivoted nicely in the absence of inter-Gulf trade, opening up to new investment deals largely in Europe and North America.  The Emir has also established new trade routes for Qatar in East Asia, most notably with China, whose One-Belt-One-Road trade initiative has started to permeate the Middle East.  The Qatar Investment Agency, which hired a new CEO in September 2018, has been active since the blockade in securing large investment deals; meanwhile, Qatar Petroleum secured a $10 billion Exxon Mobil contract as recently as February 5th.

Qatar’s vast oil and liquefied natural gas resources have been crucial to its accumulation of the world’s tenth-largest sovereign wealth fund, which stands at $320 billion and allows Qatar to effectively spend their way out of crisis mode.  One example is Qatar’s new unconventional dairy industry, which it kick-started in response to dire dairy shortages resulting from the blockade.  The project began after Qatar airlifted the first of a reported 4,000 cattle from Germany in July 2017.

Politically, Qatar’s leadership has not shown any visible signs of weakness, and the Emir’s popularity has only grown.  In Doha, the “Tamim the Glorious” mural has become a consistent reminder of the support the Qatari people enthusiastically grant to their leader.  Drawn by local artist Ahmed bin Majed Almaadheed, “Tamim the Glorious” has been draped over skyscrapers throughout Doha’s West Bay area and is ubiquitous on bumper stickers and billboards across the country.

US foreign policy is also heavily affected by Qatar’s new position in the Gulf.  The blockade has placed American diplomats in Qatar in a strange position; on one hand, the American Al-Udeid air base—the largest American military base in the Middle East—is built on Qatari soil, where the US hopes to deter Iran from regional aggression.  On the other hand, however, a unified GCC is more strategic to US interests than one on the verge of implosion, and being the natural head of the GCC, Saudi Arabia has important leverage.  While US Secretary of State Mike Pompeo and his predecessor, Rex Tillerson, unsuccessfully lobbied Saudi diplomats to make peace with Qatar, these relations appear unlikely to change so long as short-term Gulf security remains largely without compromise.

Qatar entered the Asia Cup ranked 93 in the FIFA world rankings and its players left as champions.  Yet, despite the Asia Cup’s brand line, “Bringing Asia Together,” the results of the Cup refreshed tensions between Gulf nations and brought months of bitterness back to international news.  Upon losing to Qatar in the semi-finals, the UAE promptly accused Qatar’s naturalized players of being ineligible for international play.  Despite silence from Qatari coaches in the aftermath of the accusation, it is not a coincidence that the targeted players included Almoez Ali, the star striker, and Bassam al-Rawi, a defender whose goal against Iraq sent Qatar to the quarter-finals.  The Asian Football Confederation, which is tasked with resolving such complaints, dismissed the charge, considering that no complaint was raised prior to Qatar’s semi-final win, even as both Ali and al-Rawi competed in previous international tournaments.  To Qatari football fans, the UAE’s complaint is a sour attempt to neutralize their semi-final loss, and at a deeper level, to continue their political battle against Qatari leadership.  The UAE’s flagship publications The National and Khaleej Times all but omitted Qatar’s name from Asia Cup news, instead congratulating Japan on their second-place standing and praising the Emirati hosts for their graciousness.

For all the questions raised by the boycott, Qatar accepts its ostracism.  It walked away from the Saudi-led OPEC organization in 2018 and launched legal complaints against the UAE at the World Trade Organization.  While the Emiratis made headlines for relaxing shipping bans on Qatari goods in February, the boycott shows no signs of ending in the near future.

As for the role of football in future GCC relations, Qatar’s investments in European club football and football media coverage continue to spark tensions.  Qatar owns Paris Saint-Germain, the premier French League club, while UAE owns Manchester City, the most recent English Premier League champions.  Meanwhile, Qatar is currently involved in a lawsuit against Saudi Arabia over its alleged hacking of Qatar’s beIN Sports Network, retitled beoutQ for broadcast in Riyadh, the Saudi capital.  These conflicts, in addition to Qatar’s upcoming role as hosts of the 2022 FIFA World Cup, mean that football is likely to remain a political issue in the coming years, especially in light of the corruption which Qatar allegedly employed to secure the hosting duty.

Qatar’s victory is emblematic of their continued resistance to Saudi-led regional policy, and if the blockade is to continue with no concessions from either side, it could threaten the strength of the GCC, as well as the Gulf’s relationship with the United States.  Time will tell whether Saudi leaders come to the negotiating table during what has been an impressive economic and political pivot by Qatar in the blockade era of GCC politics.

The featured image by Far News Agency is licensed under CC BY 4.0.