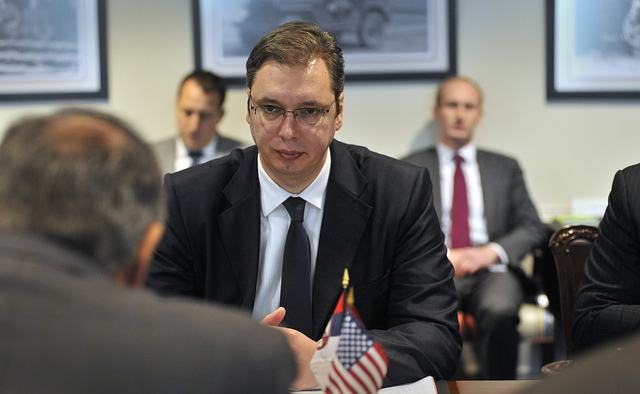 On March 16th, Parliamentary elections were held in Serbia to allocate the 250 seats of the National Assembly. For the first time since the 2000 elections (which immediately followed the overthrow of Slobodan Milosevic), the parliamentary election has produced an outright majority, this time for Aleksandar Vucic and the Serbian Progressive Party.

The Serbian Progressive Party (SNS) was founded in 2008 -by the current President of Serbia, Tomislav Nikolic- as a breakaway faction of the ultranationalist Radical Party, whose leader, Vojislav Seselj, has been in ICTY custody since 2003. Vucic’s SNS led coalition now controls 158 parliamentary seats (an increase of over 80) while the second-place Serbian Socialist Party -led by former Slobodan Milosevic “mini-me” (it was funnier in Austin Powers) Ivica Dacic– retained the 44 seats it held prior to the election. The remainder of parliamentary seats were primarily won by various new iterations of the centrist Serbian Democratic Party. These included the Democratic Party itself (led by former Belgrade mayor Dragan Djilas), which won 19 seats (a major loss of 48 seats), and  former President Boris Tadic’s recently formed New Democratic Coalition, which won 18 parliamentary seats.

The election leaves Vucic’s SNS in firm control of parliament, with the combination of a clear majority and an ally as President leaving the SNS in an unprecedented position of power. Much of the Progressive Part’s success in the recent election can be attributed to the runaway popularity of its leader, Aleksandar Vucic. Vucic, who held the post of Deputy Prime Minister (to Ivica Dacic) prior to the election, campaigned on the basis of a strong anti-corruption record and thirst for greater European integration. While promoting ambitious proposals to strengthen local industry through foreign investment and financial restructuring, Vucic deftly avoided nationalist rhetoric throughout his campaign and tenure in government, drawing support from a populace that has grown exhausted by post-war appeals to national pride. Even on the issue of Kosovo, Vucic had been deferential, arguing that the constant political rhetoric of “Kosovo is Serbia” has drained both political energy and international goodwill. In this respect, Vucic has been seen as a breath of fresh air by many voters, appealing especially to a generation that has seen no tangible results from decades of nationalist rhetoric.

While Vucic ran a campaign focusing on political optimism and greater inclusivity (towards LGBT rights as well as ethnic minorities), his own political track record is one that makes the tag of “new blood” sit rather awkwardly. Vucic’s political past paints a portrait of a man with conveniently shifting ideologies, appealing to nationalism and tolerance in equal measure depending on the circumstances. In 2008, following Kosovo’s declaration of independence and the swell of Serbian nationalism that arose thereafter, Vucic passionately defended then-fugitive Ratko Mladic as a “national hero.” Mladic -who is currently held in custody in The Hague- has been indicted by the ICTY (International Criminal Tribunal for the Former Yugoslavia) for war crimes, crimes against humanity, and genocide. He is known in the west as the “Butcher of Bosnia,” having been accused of committing atrocities during the Siege of Sarajevo, as well as being responsible for the Srebenica Massacre. As recently as 2008, Vucic (then a member of the Radical Party) defended Mladic as an idol for all Serbs to look up to.

Indeed, Vucic’s past positions and party affiliations paint the portrait of a very different man, one hardened by nationalism and the xenophobia that accompanies it. It is impossible to imagine to Vucic of 10 years ago advocating for a Gay Pride parade or greater ethnic tolerance or even increased western investment, and yet that is the man who stands before us as the new political face of Serbia now. It is impossible to yet know what really lies behind the gentle smile and pleasant demeanour. Perhaps it is a reformed man, or perhaps just an exceptionally cunning political opportunist. This is a question many Serbs ask themselves, but to many it is not a particularly important one. The country has been mired in economic and spiritual stagnation for so long that the desire for change has become desperate; so desperate that it does not really matter if the people forging the new Serbia really believe in it. After so many years of stagnation, many feel that they do not have the luxury to question whether the Serbia that Vucic promises is really one that he believes in. There is only the hope that it ends up being the one that he delivers.

The vision that Vucic preaches is one that belongs to the people, to the disaffected but still cautiously hopeful populace of a country where every new dawn is a false one. Vucic himself may be an ideologically empty man, but he serves as the vessel that carries the hopes of a nation. The victory is the people’s, and they can only hope that he -like so many before him- does not make it only his.