War On Words Across American College Campuses: The Muddling of Free Speech 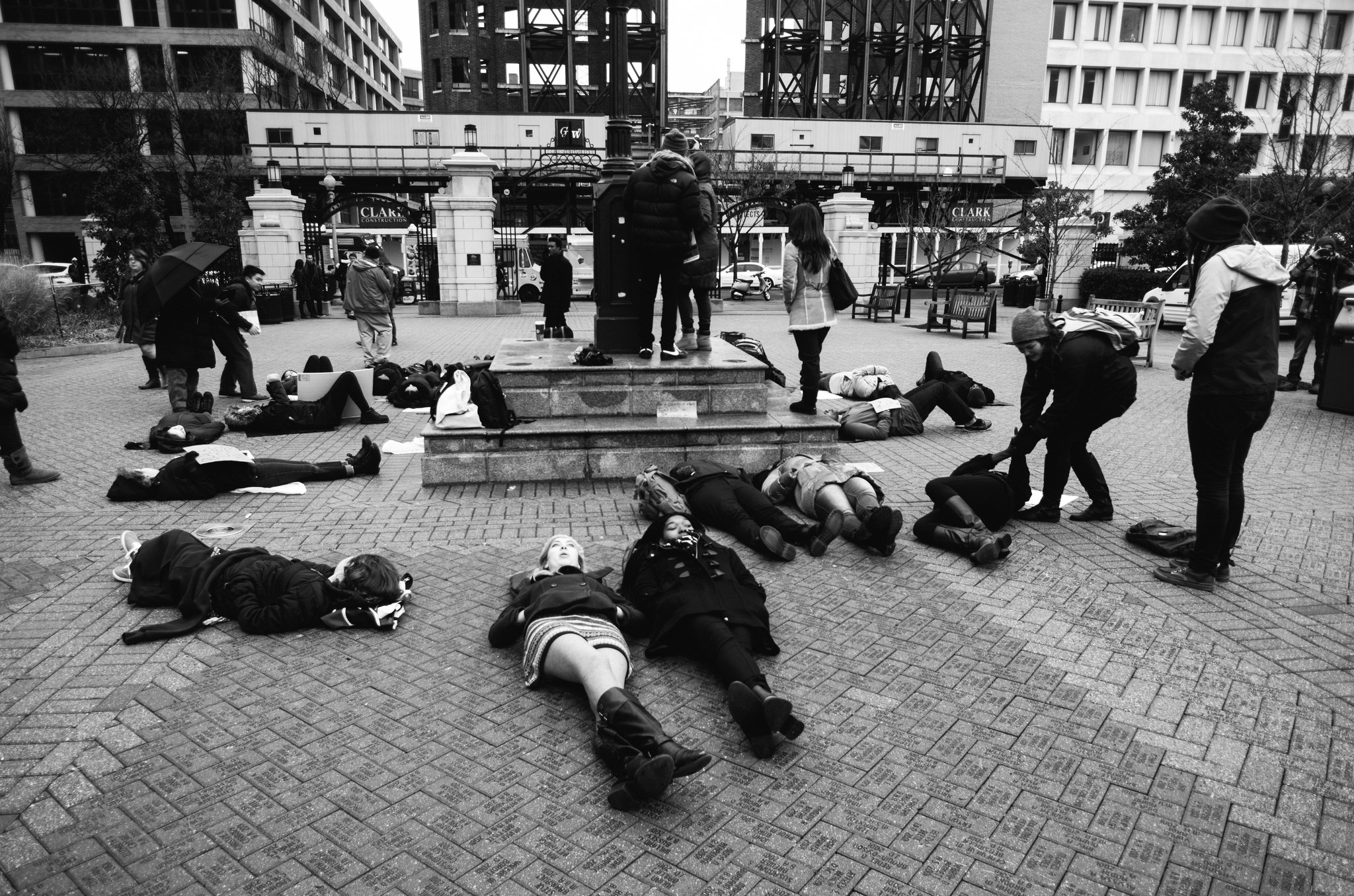 Student protest in America is as old as college itself. The earliest evidence of student rebellion was in 1766, when Harvard hosted the ‘Butter Rebellion’. As the story goes, the butter served on campus was so bad that one Harvard man cried out “Behold, our butter stinketh! — give us therefore butter that stinketh not”.

Fast forward to the 20th century, and it’s no longer the food in the canteen riling young spirits, but the tensions in American life  spurring student activism on campuses across the country. In addition to the student groups opposing the Vietnam War in the 1960s, it was the civil rights movements which spurred unprecedented student mobilization, uniting white and black Americans,  in a march toward a brighter future. The movement seemed to give way to unparalleled progress in the world of academia, producing black, and Chicano studies’ departments, and finally culminating with the ratification of the 26th Amendment in 1971, lowering the voting age to 18.

It’s been half a century since university campuses in the United States have been sites of such political and social unrest. In recent months, there has been a growing surge of intolerance toward free speech across American college campuses – perhaps driven by societal forces, most notably the pronounced xenophobia and cultural anxiety of a large segment of white working-class voters, which propelled Donald Trump to the Presidency.

The phenomenon is accentuating the difficulty of universities across America to draw the line between preventing racist rhetoric and discriminatory acts on campuses while preserving the  principle of free speech. Indeed, the movement for anti-free speech, known as ‘Antifa’ which is short for anti-fascists–originating from the streets of Germany, Spain and Italy when leftist militants took on the fight against fascism in the 1920s and 1930s, has re-surfaced to take centre stage in America. For Antifa, hate speech does not qualify as free speech. If you are endangering people with what you say and the actions that are behind them, then you do not have the right to air those views. In the words of Antifa spokesman Mark Bray: “Historically, fascists and fascistic ideas have thrived in open debate,” adding that “our goal should be that in 20 years those who voted for Trump are too uncomfortable to share that fact in public.” By succeeding in shutting down the debate as it were, it has bred philosophies and practices that shelter students from “subjectively offensive speech or reading materials”. Moreover, it has led to the establishment of “safe spaces” intended to foster politically correct environments.

As Richard Patterson writes, the anti-free speech movement, with its aim of protecting students from intolerance, has created ideological “cocoons”, sheltering pupils’ “discomfort”, while equipping them with moral righteousness. He argues that this additional protection from unpleasant ideas has had the effect of silencing voices from opposing ends of the ideological spectrum, preventing them from engaging students in conversation. The University of California Berkley was the site of one of the first eruptions of censorship back in February when students protested the hosting of ‘professional provocateur’ and former controversial alt-right writer for Breitbart, Milo Yiannopoulos.

In a similar vein, a wave of student protests erupted when Charles Murray, a political scientist and author of the controversial 1994 edition “The Bell Curve”  reporting on racial differences in IQ score, was invited to speak. When he made an appearance at Middlebury University in Vermont, the professor was welcomed by students chanting: “Who is the enemy? White supremacy!” and “Racist, sexist, anti-gay, Charles Murray, go away!” In trying to uncover the reasons behind student agitation and protest, a professor at Middlebury wrote: “At Middlebury, like elsewhere on campuses, many students are extremely conscious of assaults to the environment, and — to them — Trump represents a huge threat, someone who can undo years of progress.”  Others who have been deemed too unsavory by college campuses and prevented from speaking include Henry Kissinger, Condoleezza Rice, Larry Summers, Ayaan Hirsi Ali, and Michael Moore.

Rana Foroohar argues that protesting a speaker at university is one thing. However, banning them from speaking is quite another. In questioning why U.S. colleges, the institutional beacons of liberalism and progress, are entertaining such “illiberal” behaviour, Foroohar explains it on the basis of a generational phenomenon. The socialization of students via a culture wherein aggressive individualism meets social media has given rise to a “murky mix of New Left Identity Politics“. Identity politics is a form of politics which rejects the traditional model of “give-and-take politics.” It promotes the notion of identity, be it racial, gender or sexuality-based, as the most crucial factor in how one views and relates to the surrounding world. According to the National Review, because identity politics presupposes that we are shaped by our own identities, proponents of the ideology do not consider themselves as political, but rather argue fiercely that it is those who don’t adhere to identity politics who are the ones “being political“.

Foroohar goes on to say that today’s college generation is breaking with its student ancestry, for whom higher education was an opportunity to push boundaries and break traditions. Instead, she notes, these students have decided to seek protection rather than freedom. Instead of taking up the fight against institutions to lessen encroachments, they have turned to them for security, asking for more rules and guidelines that limit campus rhetoric, behavior, and ultimately, debate.

What about the conservatives?

How does this new climate make conservatives feel? Is the increasing censorship of conservative viewpoints on campuses worrying anyone? Or, do progressives have free reign to uproot an “embedded white culture” reflected in the various branches of academia, faculty and the administration?

It seems that everything has changed since President Trump’s election. As the Atlantic noted back in 2015: “Something strange is happening at America’s colleges and Universities”, referring to the student-led movement “to scrub campuses clean of words, ideas and subjects that might cause discomfort or give offence”.  The Atlantic went further in trying to define the phenomenon, coining the terms: ‘micro-aggressions’ and ‘trigger warnings’.  The former consists of a subtle but offensive comment or action directed at a minority or other non-dominant group that, while not intended to offend, unconsciously reinforces a stereotype,  (e.g. “I don’t see you as black”). Meanwhile, trigger warnings are alerts professors need to announce at the start of a lecture, if they suspect there may be content that might cause an emotional reaction. However, the tug of war doesn’t just involve free speech. Many liberal students believe a tolerance for hostile rhetoric can lead to greater injustices, both on campuses and in society that need to be addressed. Campuses are “places that continue to oppress their students without knowing because it’s the status quo of this country,” says Cornell University student, Silvia Treviño.

“It’s the meltdown of a major American institution,” says NYU sociology professor Jonathan Haidt, and co-founder of  a non-profit group, Heterodox Academy, which advocates for viewpoint diversity and free inquiry on US campuses. Haidt, centrist in orientation, expresses concern over the quelling of more right-leaning ideological positions across American campuses. In fact, his website reports a stagnation in the number of active Conservative academics and faculty, coinciding with a sharp increase in the number of far left and liberal ideologues in faculties across U.S. campuses. The professors and academics shaping the minds of America’s future generations have more often than not been left leaning. However, the ideological gulf between left-leaning academics from the 1990s and those entering their prime today has widened markedly. This, in turn, has translated to a diminished scope of opinions regarding contemporary issues students are exposed to.

Sam Abrams, a Professor at Sarah Lawrence School, questions the potential risks and dangers associated with the homogenization of faculty and academic viewpoints in higher education and the growing pressure on professors to hide behind the cloak of left-leaning liberalism with regards to sensitive political issues. Abrams argues that, today, there is a culture of anti-intellectualism emerging that insulates students from robust and controversial debates that the college experience is meant to foster. However, the new logic which pervades student bodies across North America is one where even the smallest deviation from a progressive standpoint is equated with treason.  There is a certain irony in the fact that, in striving towards progress and protection against hate speech, American campuses have implemented their very own system of suppression of right-wing dissent. By removing the platform from which Conservatives were once able to voice their opinions and interact freely in the ideological sphere, the liberal-left have inadvertently and counterproductively pushed right-wingers even further to the right. This is the consequence of frustration, which leads to anger and to the greater espousal of fringe views.

America has long been a nation embattled in the fight between freedoms. In our fight for freedom and justice, we lose sight of the essence of free expression as an instrument that knows no bounds, which risks turning back the clock.

The battle is reflected in the advent of safe spaces which create a controlled environment, as opposed to allowing competing ideological views to be debated and defeated with intellectual arguments. As such, safe spaces provide a sanctuary from thinking critically and fearlessly about the world. When asked what students should do when confronted with speakers they oppose ideologically, Van Jones, the Democratic commentator and a former adviser to President Obama said: “I don’t want you to be safe, ideologically. I don’t want you to be safe emotionally. I want you to be strong. That’s different. I’m not going to take all the weights out of the gym; that’s the whole point of the gym.” And yet, that is precisely what American institutions of higher education seem to be doing. By characterizing a space as ‘safe’, it’s the institution that determines and defines what constitutes ‘safe’, and which statements, conjecture and discourse are to be banned from the ‘space’ because they represent a threat, or just too much mental work to deal with.

The American college campus has evolved from the 1960s movements, when the goal was to give the oppressed a voice. The irony is that today’s student movements, who owe their ancestors a debt of gratitude for the many barriers they broke down, seem to be restoring cordons around what can and cannot be said. No one expects American students to sit idly by as flare-ups and confrontations occur across the country’s political landscape, but it is important to remember the role that college institutions have played in the evolution of American consciousness; as one of the highest reflections of diversity and democratic exchange of views and opinions, intended to foster the best of innovation, ideas, and progress. Perhaps, the most important responsibility students across America have today is to reject the walls that certain politicians are erecting both physically and metaphorically. Rather than retreat into safe spaces in order to hide from a political and ideological foe, they should look to find common ground out in the open.