From Warring to Wary: Colombia in the Aftermath of Its Historic Peace Deal 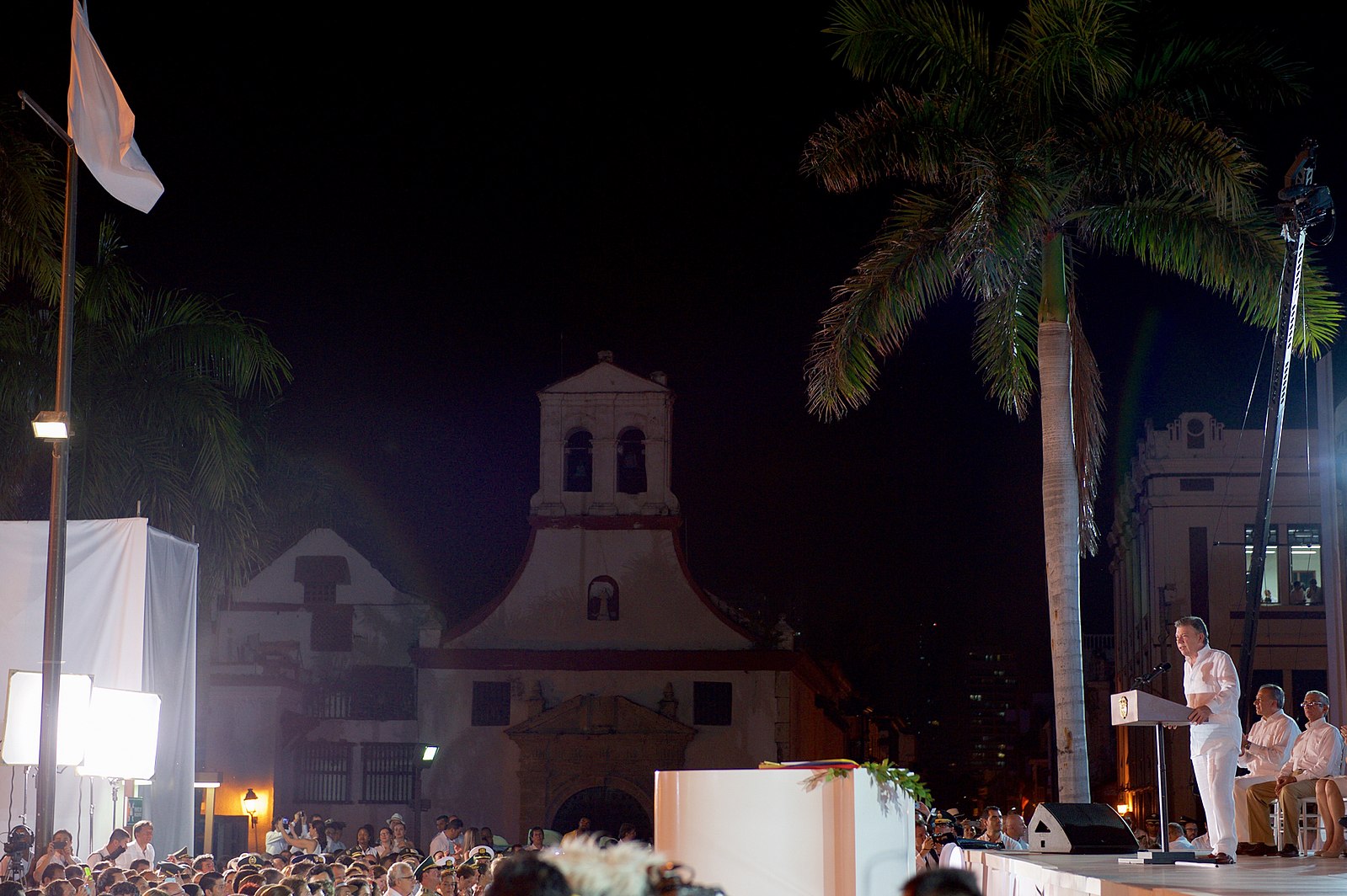 Colombian president Santos addresses a crowd after signing t he deal with the FARC.
Share

In August 2016, President Juan Manuel Santos of Colombia had an announcement to make to the people of Colombia and to the world. Finally, after over five decades of bitter warfare and four years of negotiation, Colombia’s government had reached a peace agreement with the Revolutionary Armed Forces of Colombia (FARC). The two had been at war since the end of the end of Colombia’s civil war, appropriately called La Violencia, in the 1950s. All that was needed now was for the Colombian people to vote yes to the deal in a referendum, which all the polls indicated was almost certainly going to happen.

The confidence that this would pass showed in the lead-up to the referendum. Former FARC fighters made an apology tour of the country. Colombian president Juan Manuel Santos announced the “end of the suffering, the pain and the tragedy of the war.” American president Barack Obama hailed the deal as a “historic achievement”. And then, on October 2, 2016, the deal collapsed. Contrary to every prediction, the Colombian people voted down the deal by a narrow but decisive margin.

Santos said he accepted the result. But just over two months later, now the recipient of a Nobel Peace Prize, he put a nearly identical proposal through the Colombian congress. The opposition, led by Uribe, who is now a senator, lambasted the deal on both its process and its substance. They staged a walkout in protest of the vote. Uribe, who has nearly 5 million Twitter followers, tweeted furiously. But the peace deal still passed Congress easily. With nothing else to do, Uribe again took to Twitter to express his frustration, posting videos such as “FARC: they are still murderers and rapists.”

But for Santos, none of this mattered. He had his peace deal, at least in theory. But across the country, there was still widespread uncertainty. How would the deal be implemented? How long would it take? Would Colombians have to live alongside people who had kidnapped or murdered their family, friends, and neighbours?

Over the past year, the Colombian government has tried repeatedly to assuage these concerns, but found itself unable to do so. Finally, in the first papal trip to the country since in 1987, Pope Francis arrived in Bogotá to make his own plea to the Colombia people. He urged them to accept the deal and led a prayer for national reconciliation. In a country where just under 80% of the population is Catholic, this is a powerful act. But it still may not be enough to smooth over the discontent surrounding the deal.

To the outside observer, this may all seem confusing. The conflict has lasted over fifty years and displaced 7 million people. Colombians have been seeking its end for years. In fact, continued negotiations with the FARC was what Santos ran on in his successful 2014 re-election bid. So, why the opposition?

It turns out that what most Colombians oppose is not the idea of peace with the FARC in itself but the agreement that Santos’ government negotiated with them. First of all, Santos is a more popular figure internationally than he is domestically. Despite his Nobel Prize, he garners only a 24% approval rating at home. In sharp contrast to this is Santos’ political rival, former president Álvaro Uribe, who campaigned vigorously against the deal and whose approval rating during his presidency never fell below 68%.

But the issues with the deal are not merely with the process but also with the substance. The agreement would require the FARC as an organization to pay reparations but would not require FARC fighters to serve time in prison. Instead, they would perform “community service” projects. Adding insult to injury, after their reparations are paid and community service is completed, they will be legitimized as a political party and granted five seats in the Colombian Congress, a level of representation disproportionate to the small size of the FARC as an organization. To many, the punishments imposed on the FARC in the deal are too lenient, and the FARC’s new role as a political party is insulting.

As the Colombian government attempts to implement its deal with the FARC, many are wondering just what the future of the country will look like. For now, it seems as though no revolution is coming to end the Santos administration and tear up the agreement. But as the FARC fighters lay down their arms and attempt to rejoin society, they will find it to be a daunting and perhaps impossible task. The FARC’s apology tour did little to convince Colombians that the FARC was deserving of forgiveness. The scars left by the insurgency are still fresh and the FARC’s new neighbours still angry. It’s hard to see how former FARC fighters will not be ostracized by their new communities. Instead of reintegrated into society, these former revolutionaries may find themselves once again on the fringes and disillusioned with the peace deal.